Fela Lives This Week in Baltimore

Chopteeth and Nomo will storm the city starting tonight. 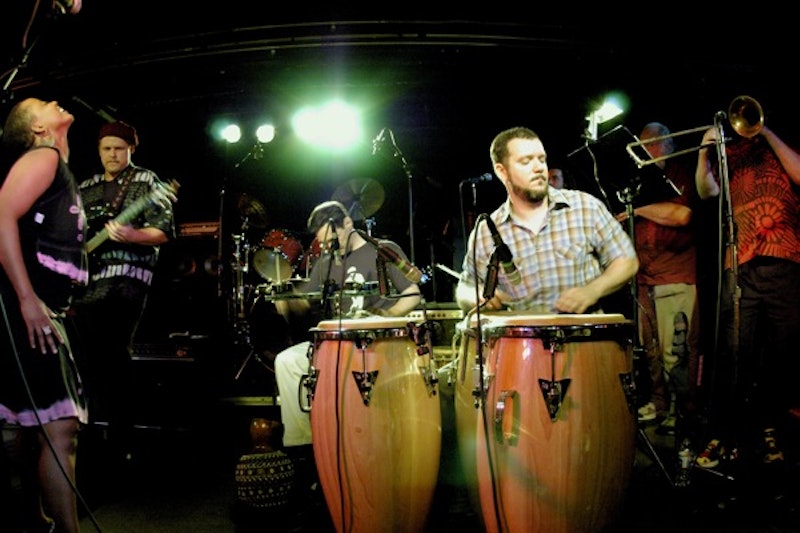 Chopteeth will perform August 4 at the Patterson Park pagoda.

I met an incoherent drunk the other night outside of the Wharf Rat who told my friend that her glasses were emasculating (his word) his buddy to the extent that he felt so vulnerable he couldn't finish his beer. Apparently this was a pickup line which became even more absurd when the dude gave us his business card claiming he was M.D., M.P.H., and M.B.A. Anyway, he said he was from Takoma Park, a locale that doesn't cross my mind too often, unless of course we're talking about the 14 piece, Takoma Park-based, afrobeat big band Chopteeth, who will play a free set in Patterson Park today, August 4. Between that show and the forthcoming August 11 appearanceat the Ottobar by Nomo, an ingenious hybrid of Fela Kuti percussion and Sun Ra free-jazz freakouts, this week in Baltimore music looks to be an outernational treat.

The most common trait of present-day afrobeat revivalists is that they rarely stick to one genre. Fela Kuti is Chopteeth's eternal muse—after all, the band name derives from the Fela song "J'ehin J'ehin" in which a crazy person is described as one who eats his own teeth. But the band is not limited to the Nigerian legend. They often sneak in salsa-inspired rhythms, modern jazz, and even some Ghanaian highlife on occasion. The makeup of the band also lends itself to some interesting permutations—comprised of 14 musicians, including an ethnomusicologist (Michael Shereikis), a former saxophonist for Gladys Knight & The Pips (Mark Gilbert), a Romanian guitarist (Victor Crisen), and a Kenyan vocalist (Anna Mwalagho) who sings in a handful of languages including Wolof and Swahili. With some heavy-hitting percussion, a five-piece horn section, and an organist, the band's overall sound is rich and forceful.

As is the case with an increasing number of musically schooled and robed collectives, Chopteeth replace the grit and sometimes abrasive undertones of a lot of 1970s afrobeat with a danceable groove that is also family friendly—which is to say, expect polished sounds and some babies bouncing up and down in their mothers' arms. It's no Howard University Showtime Band but Chopteeth has enough muscle and hip-wobbling beats to appeal to the entire community.

On the other end of the spectrum is Nomo, a band that has acquired an all-genre, indie status much like Antibalas. But it has taken several years and albums for the band to cultivate the multi-toned identity it now proudly boasts. The group's first major release on Ubiquity Records, Nu Tones, was an enthusiastic, Fela Kuti-era facsimile that impressed listeners with its authenticity and undeviating manner. Ghost Rock and Invisible Cities saw the band add more spice and influence to the melting pot, creating denser, more complex arrangements that held equal weight in jazz and, I guess, post-rock circles as well as the standard indie blog territory. This is the best time to catch Nomo's afropop act in the flesh, while it's still hedonistic but swirling in extraneous threads of orchestral pomp, free jazz, and intelligent thought.

Considering the Baltimore music scene is so faithful, it won't hurt to give some outside groups a look. And when it just so happens that two of the hippest afrobeat ensembles are playing in the same week, well there's almost no excuse for missing the celebration.
Chopteeth performs tonight at Patterson Park, near Pagoda Hill, from 6:30-8:30 pm. The concert is free.

Nomo performs next Tuesday night (Aug. 11) at the Ottobar. Tickets are $10.