We're All So Rich and Famous

Jay-Z and Kanye are lacking in street cred. 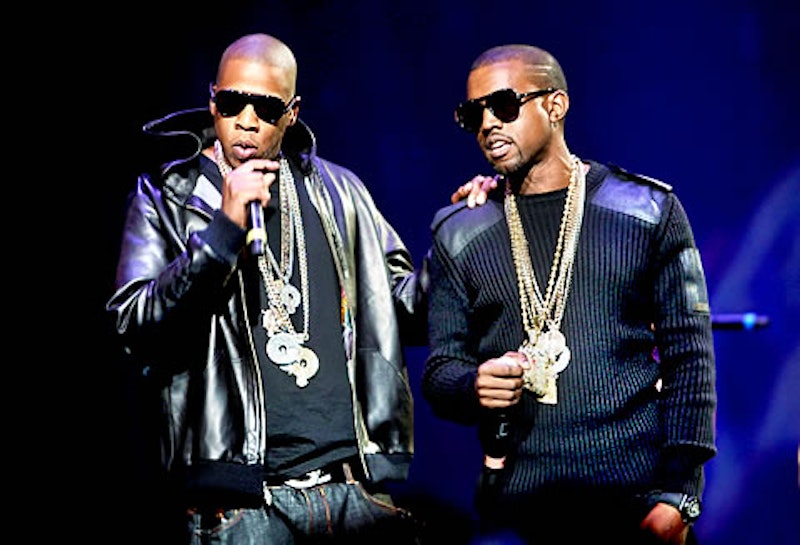 Watch the Throne sucks. How does anyone still find this interesting? Is there any nostalgia at all for the shiny suit era? It’s not that Jay and Ye rapping about their enormous wealth, fame, and power is impolite in a down economy, it’s just boring. Like we haven’t heard this before? “Coke on her black skin made a stripe like a zebra/I call that jungle fever/You will not control the threesome/Just roll the weed up until I get me some.” Great. Who cares? When is hip-hop going to follow suit with the rest of popular music and castrate its inflated and overwhelming ego? It seems silly to suggest that hip-hop can be anything but ego stroking, but of course it can. No one seems to be trying.

There was a moment when Tyler, the Creator and his Odd Future sycophants appeared poised to make really dark, distinctive, and challenging work, but Steve Albini’s recent assessment of OF rings true: “They’re not good people making ugly art, they’re assholes making music about assholes.” Big surprise. Skim Tyler’s Twitter to realize how juvenile, myopic, and not smart he really is, and yes, their success has invariably affected their work for the worse. In three years, Tyler will be making the same compromises concessions and will become indistinguishable from the mainstream, stagnant pop that he still claims to despise. None of these guys are the future of rap. Watch the Throne is the sound of two guys staying at the party a little too late.

The abundance of lazy, uninspired mixtapes, half-hearted remixes, and absolutely shameless unadulterated sample rips merely reinforces every negative attitude or idea people out of the know might have: that it’s simple, easy, requiring little to no discipline or creativity. There are many great hip-hop artists and producers working today, but still this 1990s-era empty braggadocio is just boring from a fan’s standpoint. I like hip-hop, but I loathe how little most people do with it. But listen, this is life for Jay-Z and Kanye. They own jets, can summon drugs on command, and can’t remember how many women they’ve romped in the last month. This isn’t interesting, enlightening, or even entertaining.

Pitchfork’s review analyzed and probed the thing as if it were Faulkner, trying ever so hard to curry favor and credibility with people other than superficial and self-conscious white people with no ambition. I’ve always found the way Pitchfork contributors write about hip-hop nakedly repulsive; the clinical academic tone is nauseating, especially when you realize how fucking seriously they are actually taking these clowns. And you know they’re just insecure about their whiter-than-white reputation (hipster is no doubt a nigger-level epithet at Pitchfork’s offices). Jay-Z and Kanye don’t deserve our respect this late in the game, they’re everything that’s wrong with, as Pitchfork would say, The Game.