We Know You Love the Early Stuff 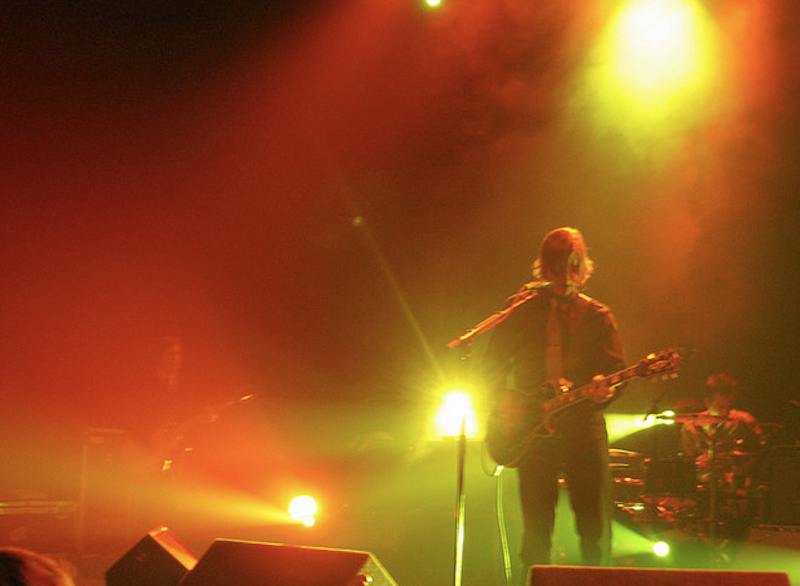 Last Wednesday night I finally saw Interpol, a band I’ve missed due to various circumstances for six years or so. Actually, I’d given up hope, considering Interpol’s recent mediocre studio work and last year’s departure of founding member, bass player, and hipster icon Carlos Dengler, who left to “work on classical composition” but hasn’t been heard from in over a year. Surprisingly, he wasn’t missed, and I’m ready to eat crow as far as Interpol’s vitality goes. The band I saw at the 9:30 Club in Washington was tighter and more confident than I could’ve ever imagined two or three years ago, and clearly very happy to play to an appreciative crowd.

It would be hard to argue that Interpol hasn’t leveled off since the brilliant one-two punch of Turn on the Bright Lights and Antics in the early 2000s. Follow-ups Our Love to Admire and last year’s self-titled record are spotted with good songs here and there, but both are merely vague impressions of their earlier work. Apparently, Interpol has realized this: since last summer, their set lists have been loaded with all the high points and a bunch of choice deep cuts from their best, first two records, scattering a handful of new material in between the cracks. “The New,” “Specialist,” “Leif Erikson,” and “Take You on a Cruise” all at the same show…who would’ve thought that could happen almost a decade and a half into their career? You’d think Daniel Kessler would be pissed there were no claps of recognition for new ones like “Memory Serves” or the interminable “Lights”—after all, isn’t it kind of demoralizing to be regarded by your own fans as creatively washed up?

Frankly, I don’t really care. Interpol is doing what other similarly self-important artists would never do: they’re pandering to, or at least accommodating the widely held belief that those first two records are simply better. It can be uncomfortable for a band, but ultimately all this rock philosophy means nothing when you’re still putting on great shows and making cheddar. Perhaps the most important and satisfying development is the quality of Paul Banks’ voice—after years of partying hard and smoking, his voice has improved. Banks’ rich, slightly nasal baritone soars on songs like “Evil” and “NARC” where it used to fail him, and hired hands Brandon Curtis (of Secret Machines) and Brad Truax (“Reverend Green”) played Dengler’s virtuoso keyboard and bass parts deftly. Even the thin trebly dogshit live sound of their guitars has been beefed up, and Kessler’s wooden and staccato playing style has smoothed itself out.

It was gratifying to see Interpol in top form. The absence of Carlos D and the gargantuan chip on their shoulder has provided much needed levity and warmth to a band whose pretension and approach often clouded their enormously powerful, propulsive, and emotional music. I’m actually excited for another Julian Plenti record.