We Call It Psychedelic Soul

An interview with Jordannah Elizabeth. 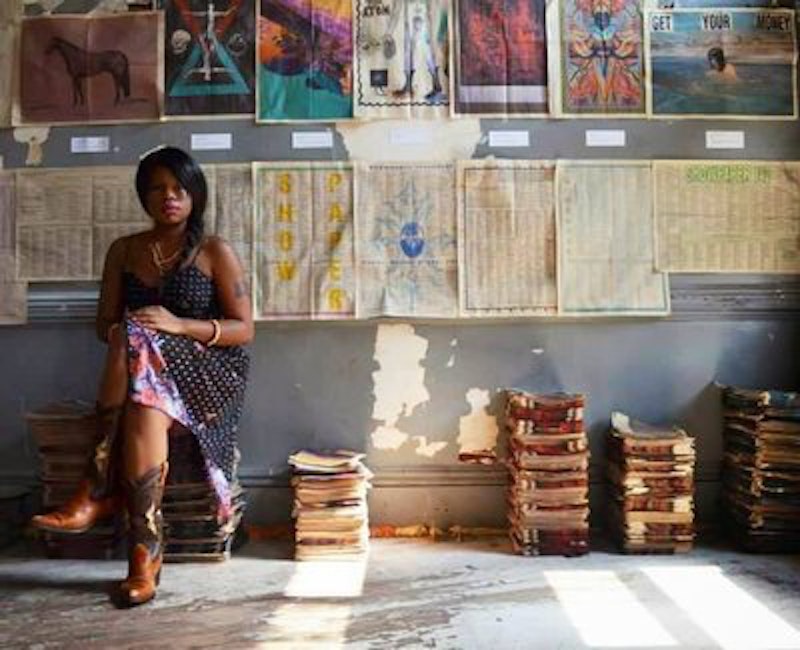 Elizabeth isn't just a singer though; she's a one-woman vortex of music hustle. She's a music journalist (she just wrote a short piece for my website she runs a publicity label for other bands, and she’s working on getting a label for a new album). She talked to me about the music industry, Nicki Minaj, rock, hip-hop, and psychedelia.

Splice Today: Hi Jordannah, it's Noah. How are you doing?

Jordannah Elizabeth: Oh, I'm Facebooking to the media about not exploiting my body as a black woman.

ST: Well, jeez, I guess if that's what you're doing why don't we start there. We'd talked a little about Nicki Minaj by email—you like her in general, right?

JE: I didn't like "Anaconda." I didn't like the fact that in her new album she was singing the whole time. I enjoy when she's rapping. I grew up with true hip-hop; I like "Bees in the Trap," I like certain rhymes. But... do you remember when she first started getting big, she made that speech about women being bitches and men being bosses? She said, when a woman is being strong she's a bitch; when a man is being strong and having standards for himself, he's considered a boss. You know, I've been an entrepreneur since I was 17 or so, and it was just nice to hear someone my age who I could identify with. Because 10 years ago, being a black female in my teens and early 20s and running art galleries and events and my own company...

ST: There weren't a lot of role models.

JE: There still aren't. I haven't met any black female journalists, managers, publicists who work in indie music and underground rock and psychedelia except for Trina Green in Los Angeles. A lot of times, I’m the only black female in the room.

ST: There are lots of black women in music, though—but it tends to be in this very sexualized way. When you were saying you didn't like "Anaconda," were you talking about the sexualized way she presents herself in the video?

JE: There's nothing wrong with being sexy. I have a photo shoot coming out where I'm in a bikini top. I was a pin-up model early on. That's not the issue. I think that the perception she's putting out to girls is really unhealthy. A nine-year-old can turn on this video, and it wasn't like that back in the day. It was TLC where the girls were wearing baggie clothes and riot grrrl, and the boys loved us. I just come from a different time; I'm almost 30. All the ladies then were talking about independence—Brandy, Whitney Houston.

It's not that I'm a hater. It's just that I refuse to do that because it's not me. I don't identify with G-strings and that type of shit, that's all. [There's also this idea that] the "black women's body" means "big ass"—and I get really upset with that, because not all women are shaped that way. Not all black women are shaped that way. What upsets me about Nicki Minaj, is that what about the young girl who doesn't have round hips and she's African-American and she's six feet tall and a size zero in junior high? And then she gets tortured for not being shaped that way.

Which is why I went more towards rock ‘n’ roll. My brother had a budding rap career early on, and I said, look, I'd like to be in your rap video. And he said, "Jordannah, you can definitely do that, but you need to be aware of how you're going to be perceived." He didn't discourage me. But that was a big choice of not going into hip-hop and R&B. And I think with experimental music you have FKA Twigs, you have Grimes, you have Lourde, you have these girls who are able to dress with clothes up to their necks, and do their job. And maybe one day I will want to be sexy, but I also want to be able to dress the way I want and be accepted.

ST: So what's happening with your career now? You're putting an album out?

JE: What's happening is that IDEA records is putting out the single "A Prayer for Black America," which was produced by Breck Brunson. It's going to be a split single with Esperik Glare. Esperik Glare is going to do a remix of our version, and so it'll be our version and Esperik Glare's version on one side, and then Esperik Glare will have two songs on the other side and I may do a feature or sing on one of those.

The full album, A Rush, is not optioned yet; I'm still in meetings. And I'm running an IndieGoGo campaign to try to fund the final mixing of the record.

ST: A Rush sounds a bit like FKA Twigs and alternative R&B, but Bring to the Table from earlier this year is more folk. So I wondered what genre you consider yourself. Do you see yourself as folk?

JE: All of my albums are very different because I like to collaborate with different people. But, you know, we call it psychedelic soul.

ST: That's what they used to say Sly and the Family Stone was, right?

JE: Yeah, I think that's where my stuff derives from. Sun Ra and Nina Simone. You know there was a lot of black psychedelia—even P-funk. There was a lot of experimental black artists who—Ray Charles didn't do psych stuff, but he experimented with his style and bounced back and forth, and Odetta. Betty Carter was one of the bravest improvisational vocalists that I know. But on the other hand, Bob Dylan, Three Dog Night, the Doobie Brothers, Elton John. It's that mix of psychedelia, folk, country with black gospel, R&B and trip-hop and hip-hop. It was really nice to find Shabazz Palaces as well. I don't know that A Rush was inspired by them, but I think that that is just true psychedelic black music right now, for sure.

ST: Psychedelia isn't usually thought of as a black style; you seem to be saying that that's a misapprehension, is that right?

JE: Yeah, it's a misconception. You know, I've written about P. P. Arnold, who was the first one to sing "The First Cut is the Deepest" and who was signed up to Mick Jagger's record, and she did a lot of songs with the Small Faces. Arthur Lee with Love—the British Invasion, that music comes from Muddy Waters and mixing it with LSD.