Ariel Pink’s pom pom lives up to its hype. 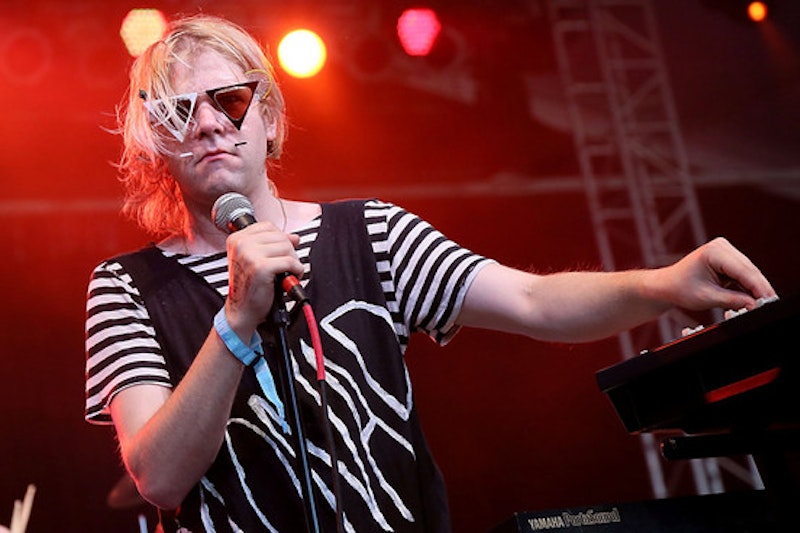 Ariel Pink’s pom pom is a drug-fueled/drug-sick overstuffed opus in line with Blonde on Blonde, Tusk, Zen Arcade, The White Album, and The Wall—manic depressive and paranoid to its bones, as even its lightest moments feel imbued with sadness and doom. It’s sequenced like The White Album: all the songs have wildly different styles but there’s an inexplicable, vague doomsday clock feeling hanging in the background throughout its 69 minutes. Opening track “Plastic Raincoats in the Pig Parade” (co-written by Kim Fowley) is haunting, a pure bubblegum pop song with direct Beatles quotes and a soaring overture of a chorus hung on the line “Cocaine man’s got the portabello girl.”

pom pom is a swim through total control and abandon, insecurity and mastery, veering from callous and crude to fully vulnerable and sincere, even in one song: the way “Sexual Athletics” begins with an obnoxious cock strut riff and all that business about being a “sex king… on a velvet swing” and the snotty “who wants to go to the emotional olympics!?!?!?!!!” It breaks down into a hazy SMiLE wall of overtones and ringing bells and xylophones, as Pink croons “all I wanted was a girlfriend all of my life.”

Pink’s provocative personality in the press this year has changed the way many people see him: he went from “burnout weirdo with that one song” to “misogynist troll” in a matter of months. Footage of his “meltdown” at Coachella 2011 was arguably as well-known as “Round and Round,” that one song, and even though 2012’s Mature Themes was fantastic, it wasn’t the event that pom pom is. This is the culmination and exhilaration of nearly everything Pink has explored before, bridging the gap between his 8-track period and his last two “hi-fi” LP’s. Before Today and Mature Themes sound so thin compared to pom pom, impeccably produced, somehow sounding warm and dense like The Doldrums but with the clarity and space of a professional studio and top players. Pink’s world isn’t limited to impressions anymore—he can write a song like “Nude Beach A Go-Go” or “Not Enough Violence” and fully realize what they’re meant to be instead of being limited to creating 8-track approximations. Both approaches produce very good and interesting results: for example, I’ll never be able to figure out the inspiration behind “Are You Gonna Look After My Boys?”, and I don’t want to. With his last two records, there was less cohesion and the references were easy to spot and not always that interesting.

But something like “Dinosaur Carebears” is as confounding as “Trepanated Earth.” pom pom does not drag; put it up there above with all the double albums that just fly by. It’s my favorite kind of album, all this bullshit about adding and subtracting songs, the way people talk about how The White Album would be better pared down, well it would be pretty run of the mill. The context of a double album allows for songs like “Jell-O,” “Dinosaur Carebears,” “Exile on Frog Street,” and “Black Ballerina” that would stick out sorely on a single LP for being so different.

pom pom’s inconsistency is what makes it consistent and cohesive and it’s the first piece of thematic work by Pink. He sounds like Cartman and Ann Coulter at times, and he goes through the same sort of childish regression and juvenile fixation on sex that went on in Yeezus. “I’m gonna fuck you hard on the sink/after that give you something to drink” is pretty similar to “Come on don your doggie collar, bet your bottom dollar/Take your bra and panties off, you juicy Belladonna.” Friends of mine that used to be mega-fans of Pink (like, they had Yas Dudette) have turned on him for being a misogynist troll. But if you can get down with Yeezus or Tusk without being distracted by if it’s “problematic” or not, pom pom will go down easy: it’s far and away Ariel Pink’s magnum opus, a panoramic and gorgeously constructed view into another loner savant’s insecurities, abilities and obsessions.