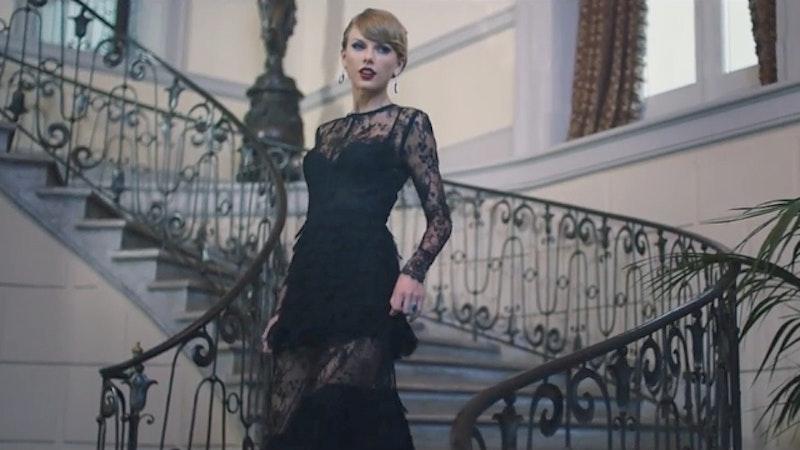 The song commences with a whispered, early morning hip-hop snare and synth while a Shelby Cobra escorts O’Pry across cobblestones to the castle door. He looks around the mini-golf Palace of Versailles, the handiwork of an investment banker.

Taylor, not yet out of bed, is pumped and singing a tick-tock greeting: “Nice to meet you. / Where you been? / I could show you incredible things.” Her arm is raised in a black glove, eye mask lifted on her forehead, she’s in a sheer negligee and rocks out adorably with her white poofy kitty snuggled up to her chest. Neglected breakfast on a platter with flowers, canopied bed flanked by stalwart white horses—this decadent view affords a manicured, pedicured daydream destined to disappoint because of it’s unreality. It’s the suburbs for rich people.

So why not play a game? Undertake something dangerous, like having a guy over. Swift sings beautifully her shock at seeing her playmate: “I thought oh my god, / look at that face, you look like my next mistake.” Looking at O’Pry’s face, you can read it a million ways divorced from Swift’s confident verse: “New money, suit and tie, / I can read you like a magazine.” Apart from glossy pages, perhaps some of us read him like a human being, vulnerable, if also manipulative. He fluctuates between confidence and embarrassment as if he dreads a revelation of his own disproportion in the picture. But he’s also resigned to what is fun in the moment.

For a chorus, you find yourself won over. This fresh affair with Taylor and Sean unfolds as whimsically as Harry Potter. The two toast drinks at a long table and make irresistibly awkward eye contact, followed by private ballroom dancing, circling bikes through the home library and some half-assed portraiture, where Swift plays Leonardo DiCaprio to O’Pry’s Kate Winslet.

Then on their airing a caped O’Pry like a 19-century Michael Vick walks a Cerberus of Dobermans through the gardens but appears split-brained. With all this stimulation and pomp, one wonders what could be on his mind or hers? How conservatively they take their horseback riding! Is this a date or a photo op? A commercial? In lavender booty shorts Taylor carves a heart with homeboy’s name next to hers on a peeling tree.

But here’s the crux to this satire: Don’t get too comfortable posting your love for posterity, because undivided attention is a thing of the past. Don’t expect your man to give up playing on his phone. In one Rich Kids of Instagram picnic scene that starts idyllically enough, with champagne and candy hearts, Swift gets up to find O’Pry either on Candy Crush Saga or texting another special somebody. Removing her sunglasses, she’s like, “Oh, hell no!” Swift doesn’t touch technology in the video other than when she tauntingly dumps his precious device into the fountain. But this virtual cheating is exactly the jumping-off point for Taylor who in the lyrics admits getting “drunk on jealousy.”

Swift’s character is powerful in not being innocent either, and in not checking her passion. The real fun of the video is watching her aggressively erase all of his comforts within the homey romantic space they’ve enjoyed for about a month.

Believing “boys only want love if it's torture,” Swift goes sadistic, and it’s therapeutic. She takes both agonizing tears and lunatic laughter to ridiculous extremes, and the camera storms in with desperate flashes of wild revenge. I credit the video for celebrating crazy as a mainstream universal. If you don’t go insane, isn’t intimacy a boring Hallmark card? There’s no madwoman in the attic. The freak-out is a rite of passage we all should own. If only the guy could also break down and go nuts, but he just sulks like a wounded puppy, especially when she violates his material possessions. Arguably the finest lyrics in the song might be when Taylor invites criticism: “You can tell me when it's over / if the high was worth the pain.” She needs him to express passion as she breaks from the unreal, but he ultimately flees that responsibility.

And about the “screaming, crying, perfect storms”—well, she cuts his shirt into laughable tatters and makes gimp holes in it to humiliate him. She flips out and launches his flaming jacket out the window. Many times the camera pans to her droopy eye makeup. She’s wearing leopard print, doing scrunches or crunches with her back against the fireplace where some servile pervert deer waits as a bodyguard. Then Swift engages O’Pry in a poison apple Voodoo mindfuck. When she violently clutches the apple, we see it give him a headache. Next up, she trashes all the paintings of him in her gallery.

Go outside and Taylor’s there savaging his car with a golf club. O’Pry throws up his arms, defeated. Cut away and she’s back in bed all sassy swishing and knife-wielding. She slaughters a white cake that bleeds. Then she straddles him on the driveway. He’s submissive underneath her, a male spider chewed on by the lovely black widow. Taylor stands on her horse and takes an axe to the tree. The broken man in a wrecked car drives off as a pristine red car arrives with a fresh son of privilege to commence the eye-fucking ignition of another proper meltdown.