The first part of a conversation with Australian duo Primitive Motion. 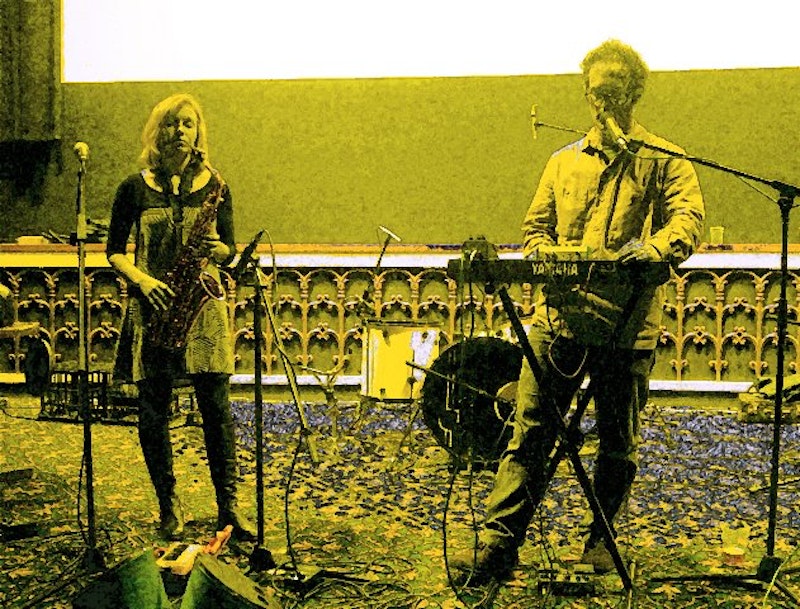 Combine dolefully dour horn charts, splayed, rattling drums, and cyclic post-Krautrock synthesizer snap, crackle, and pop. Layer with incanted, abstruse poetics. Make the first or second take the last take, but make that take sound like it was recorded underwater at two a.m. 3,000,000 years ago by stranded time-travelers from the future cutting demos to pass the time as they wait to die from starvation, boredom, drowning, or a combination of the three.

Got all that? Then you’ve got a pretty good sense of what the By Arc or Chord (Soft Abuse), the full-length debut from Brisbane, Australia’s Primitive Motion, is up to. Sandra Selig and Leighton Craig, also of The Deadtones, dole out skeletal compositions that seem to whither and decay as they unfold, powered by phantasmagoric willpower. Craig’s shaky pipes explode in forlorn bloom, like a science-project volcano, while Selig’s vocal contributions are less contiguous and higher-pitched. Together, the pair perfect something akin to ancient melodies of the future, the sonic equivalent of idiot savant cave etchings, a sound that feels distant and near all at once.

What follows is the first half of an October/November email interview between Primitive Motion and Splice Today.

SPLICE TODAY: Your songs put me in mind of the circular: hoops, loops, rubber bands, clocks. When you're writing songs, do you think about shapes, or velocity?

SANDRA SELIG: I think that question is better than any answer I can give! It's hard to know when or where the thinking occurs, like not being able to find the start or end of a circle. A song can be like a machine that allows access into a previously hidden time-shape around and through us. The loop pedal is a handy tool for making such machines. When a song is really working, it feels like it was already there before we made it audible. Velocity acts alone!

LEIGHTON CRAIG: I love symmetry and the possibilities of where repetition can lead you. A world of mirrors and echoes. Our shapes have fuzzy edges, sounds that are like a blurred geometry. But thinking is counter-productive in making music. It has to be intuitive: just push record and go for it.

ST: How and when did Primitive Motion come to be?

LG: We've collaborated in various forms since 2003, partly as a result of Sandra's work as a visual artist. The first time, I made an ambient piece to accompany one of Sandra's beautiful space-spanning thread installations called "Synthetic Infinite." Her thread installations have an optical space-shifting quality that means they diffract light with the viewer's movement, like a spider's web. They draw lines and help you see the shapes that exist in empty space. I tried to make something that complemented that sense of gentle movement, of floating through a space. I think that's what we still do on a subconscious level. Sandra joined the other band we share—The Deadnotes, with Eugene Carchesio and Stuart Busby—in early 2009, so since that time we've played together almost weekly.

In October 2010 we had a jam in Sandra's studio, Franklins Lab, and Primitive Motion was formally christened. The name was taken from one of Sandra's cut-poems: “the primitive motion phenomena, the same in the same, left to chance.”

I sort of ambushed Sandra into doing lots of vocal pieces that day, which she hadn't really done before in The Deadnotes. You can hear the results of that session on the Certain Materials 7-inch EP that was released by Soft Abuse.

ST: What was the first song the two of you wrote together?

LC: I think the first Primitive Motion song recorded was probably a drum/vocal version of "A Straight Line." The drum machine/keyboard version of the same piece made it onto the record.

In terms of “writing” songs, we just jam them together with the recording machine running. They are improvised songs. A few pieces we come back to and rework for live shows, but the pieces on Certain Materials and By Arc or Chord are very much the first time those pieces spun into orbit.

SS: Yeah, that first jam in Franklins Lab—my studio at home—was fun! I like surprises. I even enjoy the occasional polite “ambush.” Leighton did just kind of turn up with his car-load of amps and keyboards, and we set up amongst all the bits and pieces of ongoing artworks and mess in my studio. I have a drum kit that permanently sits in the middle of the room which I play regularly, but it seems that it had actually been lying dormant, just waiting for that day in October to really come alive. I felt very privileged to be jamming with Leighton both in The Deadnotes and now Primitive Motion, especially considering his incredible solo works with which I felt an immediate affinity, like 11 Easy Pieces with its wondrous, quivering patterns of interplanetary dust.

ST: One of the fantastic things about Primitive Motion is how, somehow, you make the combination of syncopated beats and horns seem fresh and new. "By Arc and Chord" was the first song of yours I came across, and I listened to it over and over, sort of marveling that no-one else had ever thought to make that particular connection musically—then I realized after a while that I'd heard it in other places, but you guys were briefly able to make me believe that I hadn’t. How did you come to integrate horns in this project? Were they already in play in The Deadnotes?

SS: Well, the euphonium and various other instruments like saxophone, clarinet, melodica, flugelhorn and trumpet are always lying around the room when we play, both in Primitive Motion and The Deadnotes. This family of instruments was present in the room with us during the recording of Certain Materials, although we only ended up using a flute in that one. In “By Arc or Chord,” I happened to be playing something on euphonium while Leighton was playing around with some beats on his keys, and then it merged and went from there.

The euphonium is such an under-heard instrument. It's probably best known for being seen in Salvation Army Christmas carol performances at shopping centres. I really love how it can sound like a warm male human voice at times, and when amplified through a delay pedal it inflates into a giant, sonorous hot-air balloon! We hope to use the euphonium live for the first time at our next gig in a few weeks.

ST: How did "In the Space of Shape Time" come together? Did it evolve through versions? I'm always intrigued by songs that are exceedingly spare in this way, where the vocal sets and carries the melodic load.

SS: "In the Space of Shape Time" was one-take, one time. Leighton started a beat on the drums, while I picked a lyric at random from my note pad and the words just sang themselves into the beat. The whole album was pretty much done like that. I guess we're used to improvising with each other from playing in The Deadnotes, so we have a good feel for how our sounds fit together in different combinations.

ST: Are similarities between the names “The Deadnotes” and “The Dead C” coincidental?

LC: Yes, that is a coincidence. The name relates to an organ that I borrowed for a session with Eugene a few years back. We carried this really heavy beast into the gallery where we practice and then found out that there were several notes that didn't work. So we had Deadnotes flagged as a possible band name, then when we had a couple of plays with Stuart Busby and “the dead notes” seemed like an obvious reference to what we were doing.

ST: Have songs ever come to you in dreams?

LC: When you’re tuned into the right channel, I think making music is close to being in a dream. Particularly when you improvise. I'll often listen back to recordings and wonder how we came to make a particular piece, like it already existed but was breathed into life. And where did that lyric come from? So I think there is often a close relationship to the dream state when we are playing, and then of course there are those pieces that could actually be the soundtrack to a dream; perhaps something to do with all that reverb, sound drifting and floating through the air.

SS: Yes. The dream comes to me in a song.

ST: On songs like "Certain Materials" there's a strong tribal vibe, which is interestingly at odds with the more retro-future skeletal synth pop songs in your catalogue; it feels almost devotional in nature. Are the two of you particularly religious or spiritual people?

SS: I don't subscribe to any religious beliefs, but I can see how “Certain Materials” might sound a little hymn-like as both our vocals do have a kind of unintentional pattern of “amen” notes at the end of the phrases. My vocal was sung through a reverb that mimics a cathedral too, so clearly it mimicked it very well!

LC: I am very fond of hymns, so I'm not surprised if that reference exists.  I have actually recorded several solo pieces that I consider to be hymns, including a cover of "Abide with Me"—complete with looping cassette and feedback. When I was learning to play the piano as a youngster, I was encouraged by my teacher to play hymns to help develop my “sight-reading.” I love the simplicity of hymns, the beautiful chord changes, possible harmonies and the cyclic nature of the pieces.

ST: It could be argued, I suppose, that music is a religion in and of itself.

SS: Yes. In fact Leighton has a fantastic red glowing light next to his turntable at home that illuminates when there is record playing and casts a mysteriously charged glow over the spinning record and onto the surrounding artworks. It can sometimes even look a little shrine-like.