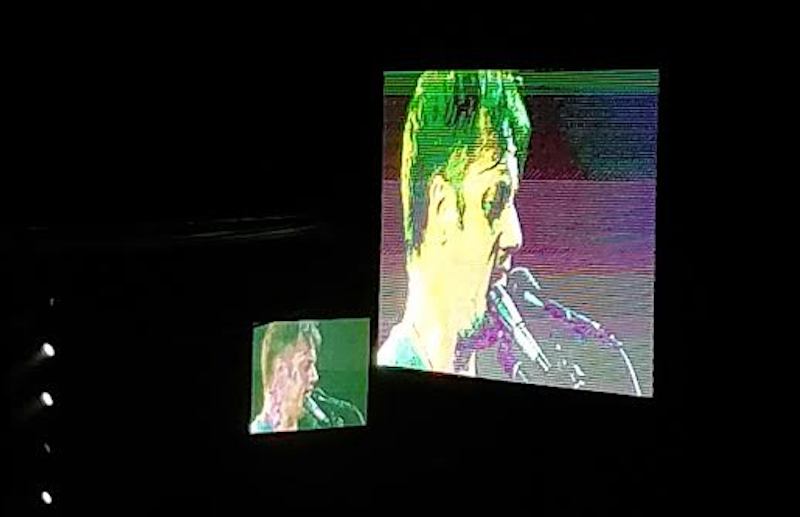 Modest Mouse are a big band that’s just… around. Despite having a large and diverse fanbase, they remain on some cultural island of their own, too big to be cool and too small to be a household name. Going through a Modest Mouse phase is as much of a rite of passage for a teenager as smoking pot. Maybe not—they certainly appeal to the armchair psychology and passing interest in existentialism that comes with puberty, and perhaps it was just good timing that MTV started playing their videos in 2004 when I was 11. When the “Float On” video came out, I thought they were a novelty band: I’d never heard of them, and there were about half a dozen other trendy videos done in the same stop-motion animated paper cut-out style, like “Take Me Out” by Franz Ferdinand and “PDA” by Interpol. I thought Isaac Brock’s ridiculous mustache in that video was his own, and it wasn’t until the video for “Ocean Breathes Salty” came out that fall that their music hit me. I got Good News for People Who Love Bad News, but it was The Moon & Antarctica that’s stuck with me since: its cold, clinically depressed guitar sound and arctic atmosphere combined with Brock’s lyrics’ beguiling mixture of Bukowski and Carl Sagan lit me up, and even if I haven’t regularly listened to them in years, I was obsessed with them during the years that things are imprinted onto your consciousness forever.

I don’t know if it’s “Float On,” or their slow abandonment of the indie rock world that spawned them in the Pacific Northwest, but Modest Mouse are almost never mentioned as an influence for a generation of bands that were surely raised on them. Ed Schrader is the only one I can think of I’ve ever seen defending them. If only I could find the tweet, it went something like “Stop pretending you don’t love Modest Mouse!” They almost never come up in the conversation about their contemporaries, whether it’s Sleater-Kinney, Elliott Smith or Calvin Johnson. Maybe the fiasco of Brock’s rape accusation in 1999 alienated them from the indie world and their coterie of press and tastemakers—in any case, it was a non-issue by the time they broke through to the lower-level of the mainstream in 2004. And now they’re just sort of around, touring constantly and playing to packed amphitheaters and pavilions, but with only three records since 2004. Last year’s Strangers to Ourselves, their first album since 2007, sucked—I mean, it’s just awful, that moment when an artist you considered unimpeachable starts to become a lazy parody of themselves. Songs like “Lampshades on Fire,” “Sugar Boats,” “The Tortoise and the Tourist,” and “Pups to Dust” hop up and down along at the same tempo and energy level with recycled riffs and themes that seem left over from over a decade before.

I’d seen them one time in 2009—a great show, opening with “Spitting Venom” and Brock verbally abusing a fan for requesting “3rd Planet” and then playing it anyway—and my girlfriend is also a huge fan, so we decided to go to their Merriweather Post Pavilion show earlier this week. I worked at Merriweather for two summers in high school, and it’s a great place to walk around and hang out, but lousy to see a band if you’re in the field. It felt like we were a mile away from the stage as they opened with “The World at Large,” a really sweet song. But the band is just bloated these days, with nearly 10 musicians on stage and Brock’s sloppy and slurred delivery that was never endearing has only gotten worse. It’s just annoying—not that there can’t be some spontaneity and craziness, but to feel like you’re watching someone punch in a time clock and half-ass sing and slur through the show is a drag. The sound was shit. What do you expect? I give them kudos for keeping their setlists unpredictable and full of variation, and it was neat to see them play “A Different City” after believing for years that they’d never played it live before, but I started counting down the minutes until we could leave. Nonetheless, it was fun, and I’m glad we went, but it felt like chasing a high or trying to re-live a time and getting a mouthful of ash. Maybe Modest Mouse is one of those bands that you fall for hard and burn out on, with little redemption in reflection or rediscovery. Maybe we were just too far away from it all.