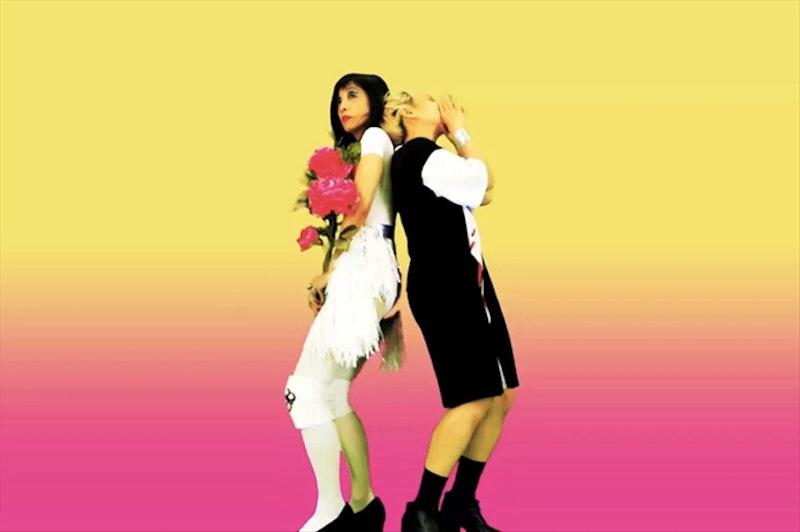 They rip the bassline off from either Fine Young Cannibals' "Good Thing" or Wham!'s "Wake Me Up (Before You Go-Go)"; they cut a video that's a cross between M.I.A's fashion-line patterns, shitty Web 1.0 memes, and SNL Digital Shorts. So Cibo Matto are back, and it's difficult to parse what it's supposed to mean on any level. "MFN" is the sort of sensory hot mess that, I hope, will make actual sense in the context of the upcoming comeback album they're preparing to tour everywhere except near where I live. To be totally honest, I'm more or less embarrassed for all humanity until about 2:30 in, where the mad stoopid horn break fades out, and Yuka and Miho start rapping about lobster and oyster shells—these two made their post-Alt Nation bones as food MCs who also happened to be Japanese women, remember?—and the groove turns as hunched and baggy as a B-Boy's vintage Bapes, jazzy, funky, something special. After that the skylight opens and doves flood in, party's over, time to split. What would happen if these two threw down with Acton Bronson? The mind boggles.

Criticism A: this video doesn't feature enough dogs. Criticism B: this video features too much Moby. Criticism C: to effectively cancel out Criticisms A and B, the director might’ve done well to smear a nude Moby with raw steaks—which, eww, he's a vegan, right?—then let loose an entire kennel of canines to tackle the producer/songwriter/hair plug candidate, furiously licking him everywhere and eliciting giggle fits from everyone on set.

Okay, maybe that's a little cruel; I'm kidding, really. Okay, a lot cruel, given that picking on Moby is like picking on a defenseless baby seal. Okay, this video is crazy adorable, and I like dogs as much as anyone. The problem is that I don't know what to say about "Almost Home," as a single, which could easily waft by the listener while nodding off on an elevator or shopping for organic squash at Whole Foods or idly dusting the divan while waiting for someone to call you back. It’s as cloyingly beautiful as it is maddeningly innocuous, with a chorus that is in-the-moment heavenly as it is immediately forgettable. It melts on the brainpan, and vanishes; you won't miss it.

As a song title, "Empty High Rise" could slip unnoticed into the 2013 Tor Lundvall box set I keep meaning to finally review, which is full of atmospheric, bleary numbers with names like "Early Hours" and "Grey Rain Ships" that fade numbingly into one another. For her part, Alison East doesn't see fit to abuse the inherent imagery in a The Stand or I Am Legend or The World Without Us way; instead, she evokes brilliant crystalline contours, whipping Asgardian rain puddles into magickal whorls that are more imagination-stoking fantastical than dread-inducing. At moments, "Empty High Rise" suggests a twilight winter sleigh ride hosted, alternately, by Richard D. James, a flute-playing shaman, and, perhaps, a friendly demon. One can feel the center of gravity contort to differing extremes and back, from chime-studded jangle to astral state to reverberated ascension, the electronics refracting whatever East is hammering at here—some strings, perhaps synthesizers, a battery of effects pedals, whatever—in various directions that feel almost revelatory.