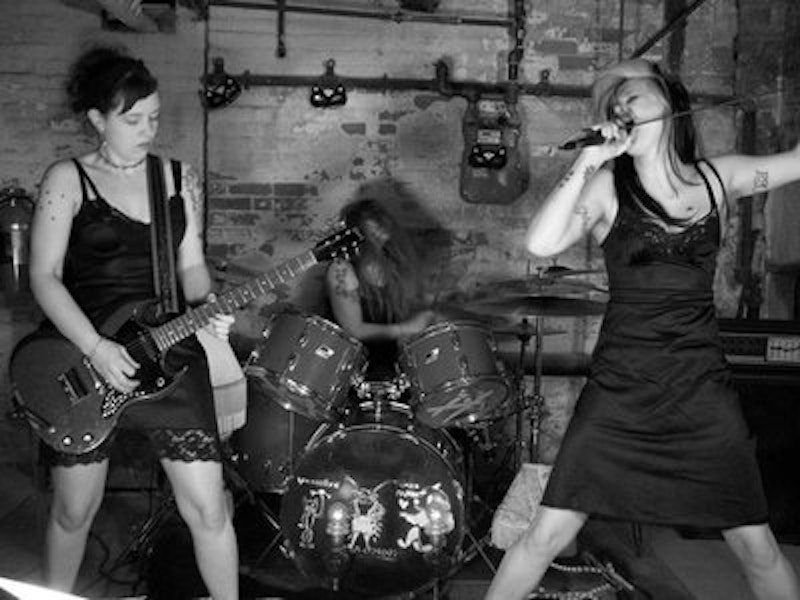 "Masters of the Internet," my black ass. If anonymous, scruple-free music pirates actually had their shit together and the recorded zeitgeist on lock, I'd have been able to find "Ritual Slaughter" online for free stream in at least four or five different places; instead, I can't even find the song in one, which means that whatever I write about it has to be quadruple evocative enough to convince the reader to part with a handful of coins in exchange for it—which is a lot of pressure for anyone to live up to.

Okay: listening to "Ritual Slaughter" is a lot like watching Bruce Banner struggle mightily to not transform into the Incredible Hulk because he is wearing a rented Dolce & Gabbana tuxedo that he can't afford to destroy, until all that pot-boiling inner turmoil just explodes, and he winds up butt naked and fuming at the center of a frightened, giggling throng of party goers.

Essentially, NYC's Ceramic Dog have stumbled upon a second or third cousin of the A-Team theme, and seem determined to rock it until the wheels fall off and the chassis drops out: the guitars gesticulate with hurricane force, the bass cold-cocks the theme beyond unconsciousness, the drummer flails at the skins like he's trying out for Lightning Bolt. It's as vital and alive as Usain Bolt during an Olympic 100-yard dash, which is to say that it eats the breakfast of 99 percent of whatever else passes for guitar rock this year.

Whore Paint, "I'd Eat My Bones"

As a frontwoman, Reba Mitchell scares me the way Kristen Hersh used to scare me on 80s/90s Throwing Muses spasms. She seems capable of anything, at any moment, handling vocals like a mad Valkerie one second and like a purring nurse the next, or vice-versa; it doesn't help that the rest of Whore Paint is as bracing and dynamic a force of nature as she is, and that when it's time to shift into high emotional avalanche gear it's impossible to tear one's attention away from the melee, even if it's unclear exactly when or how those stray wisps of cloud coalesced into a billion-pound storm system that's bearing down on you like a Mack truck. Slightly staggered drums, staccato guitar figures, some breathy, fucked-up vocals about hanging skin—and all of a sudden, you're in the beast's belly of "I'd Eat My Bones." The name is as desperate as the song feels, and seven or eight listens along I'm no closer to knowing what Whore Paint is attempting to convey, but I don't much care because the energy and the impact are the point—the line in the sand that they're drawing with a physical, dark new album. I tell you what: between Humanbeast and this group, Load Records is on one humdinger of a roll this year.

If "Hox" is to be believed, it's hell up in Angers, France, where Jean-Baptiste Lévêque plies a vicious trade in "effect pedals, samples and tape collages," according to his Facebook page. There's tension at work here for most of these 15 minutes, between apparently-abandoned moon base silence and the emergence of deadly alien creatures, only illustrated with noise textures of various intensities; it's like a game of Halo, where you might imagine that every time a scraping, boiled roar recedes, it’s happening because you hoisted a piece of laser-based artillery and zapped something that was trying to eat you and your friends, or worse, transform you into a monster, like in Alien.

Thankfully, this isn't the whole story: there are stretches where Lévêque submerges the auditory space in sustained, metal-shearing swathed in echo and bleeding static that seems to encircle and seduce the ear, molting impressively increasing amounts of feedback, as if forever hardening and becoming brittle and shattering before somehow re-constituting itself and perpetuating a cycle of sorts. The last several minutes suggest something very dangerous and very hungry breathing inches from your face, but by the time you've arrived at that point, the effect is more reassuring than foreboding. There are much, much worse ways to die, and, actually, to live.