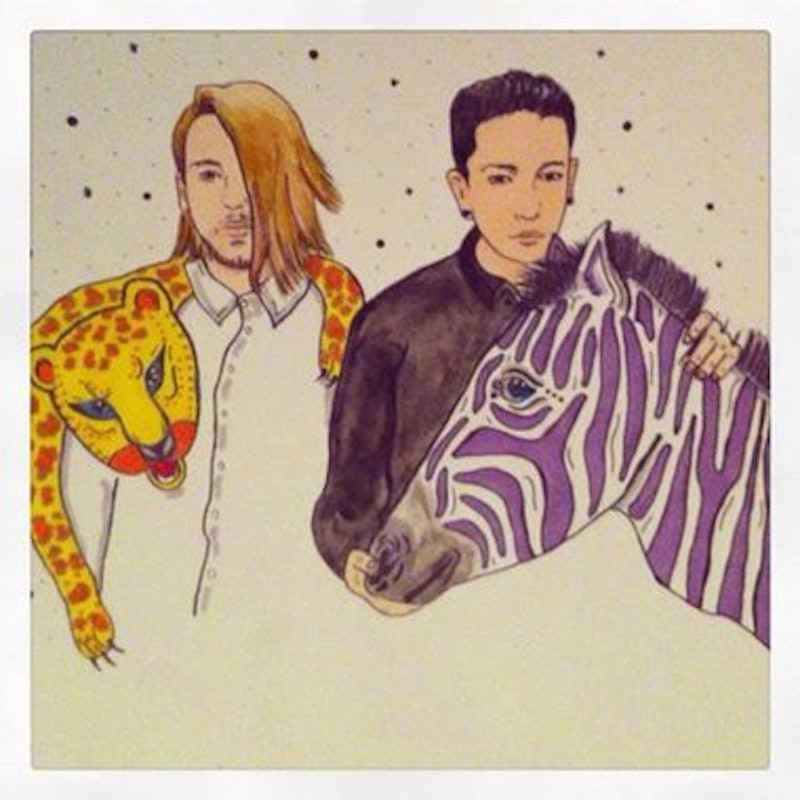 Welcome back to Triple Threat. The standard, so far, has been to listen to oodles of diverse music and tackle songs of exceptional interest—good, bad, or indifferent—when the mood strikes, when it feels right. Far-out experimental music, mainstream rap/pop, and favorites tend to win the day in this space; meanwhile, my mailbox swells with score of links to new albums and remixes and mixtapes that I never get around to listening to by artists I've never head of. So to liven things up a bit—and in keeping with former Village Voice music editor Maura Johnston's vows to both give the PRs some dap and "keep it posi" and with sincere apologies to Splice Today’s Zach Kauffman's discontinued promo-scoring campaign—Triple Threat is gear-shifting into "Russian Roulette" mode, where we go riffling through the mailbag and see what shakes out. The random rules here are simple: 1) if I've never head of the band/artist, it's fair game, 2) the weirder the song title, the better, 3) the song must’ve come out in 2013, and 4) I'm listening to each song a minimum of three times. Let's go hunting.

Want concrete proof that you should never judge an album by its cover? Listen to "Two Times." But first, look at the album cover: one oblivious dude wearing a fake leopard and another oblivious dude slow-dancing with a fake crocodile. That's straight dookie, telegraphing 30 or 40 minutes of cocaine-blinded synth pop. Then you listen to "Two Times" and it's not even in the same zip code as the expectations the cover sets up: shout-y, anthemic, somewhat facile blooze rock where the vocals flash way more bristle and fang than the guitars bother to and the drums punch the air like your drunk great uncle at a Jack White album listening party. It could be dirtier, raunchier, waggle its ass a bit more; the thing fairly moans "bank-branded sports arena" in a way that's almost obscenely vanilla. Two times? No, I listened to this sucker four times, and somehow it somehow got lamer each time out.

What's great about "Baby Maybe," by contrast, is how it doesn't care quite as much; shuffling through the flooded yard in pajamas and bunny slippers to fetch a morning paper that never arrived, it isn't much interested in impressing anyone, which is impressive for a song that's topically about trying to talk your ex back into your heart and bed. The chords glance, shrug, gurgle, and thrash the snares crash faux ineptly, there are backup singers sprawled everywhere; the song is like a dilapidated crash pad that nonetheless feels homey and familiar. Really, the frontman's doing the heavy lifting up there, but if the surroundings were more dynamic than they are you'd find him more desperate and lopsided and it'd be harder to sympathize with these proceedings. You know what this song could use, for real? Some organs. But would I listen to "Shark Week" again, for fun, on my own time? Yeah, I would.

The world needs more floridly oceanic electronic pop, I think—more Beach House, more Aoki Takamasa & Tujiko Noriko, more Nedelle Torrisi. Torrisi has her first solo out in ages coming soon, by the way—I'm considerably pumped—but in the meantime "Skinny Dipping" is hitting the sweet spot. As a singer and as a composer, the appropriately named Rainbow Chan is more loose-limbed, her vocals decorative in a way that complements the bossa nova-qua-electro-qua-Romper Room lilt of "Skinny Dipping"; the song feels at once fluid-y and too sharply focused to be fluid-y, even as the video and the lyrics submerge us in maritime and nautical signifiers. It's hard to know how to feel about what's happening here, emotionally. Bittersweet? Euphoric? Nostalgic? Maybe we're to experience this the way we might a dip among the breakers, off shore but close in enough to feel safe, gulls screaming, foam seeping into our ear canals: everything's familiar and odd, topsy-turvy, but no-one's going to walk away with hurt feelings or jellyfish stings. Get it? We're alive.