It Ain't a Gas, Even if the Rolling Stones Still Attract an Audience 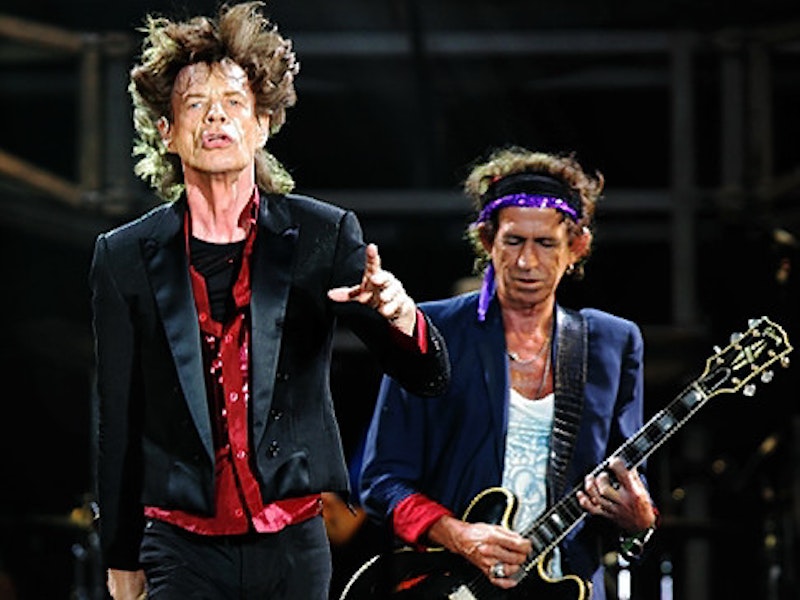 It’s within the realm of possibility that, offered $500 to see the Rolling Stones play live at a stadium, I might accept. Not a slam-dunk, though. Yes, seeing Mick Jagger prance around a mammoth stage and Keith Richards—cigarette still held in his guitar—wink at the audience while going through the motions on “Bitch” would be preferable to a two-hour church sermon or watching Barack Obama deliver a toothless “State of the Union” address, but time waits for no one and a Stones concert, in 2013, has little appeal. I’ll accept that the Stones, for a short period decades ago were arguably the “Greatest Rock ‘n’ Roll Band in the World”—although Bob Dylan and the Hawks in ’66 get my vote—and I won’t ever forget seeing them at Madison Square Garden in ’72 on the Exile tour, a brilliant show that was punctuated by the encore of Jagger and Stevie Wonder singing “Uptight.” But a lot of us were younger then; we’re older than that now.

Is it any wonder that youthful pop music fans today dismiss the Stones as a sort of silly, even pathetic, nostalgia routine that’s still fetishized by a media that really believes the band still paints it black, you devil? Which is a shame, really, since the over-saturation has led normally inquisitive boys and girls, men and women, born after 1980, to ignore records like Between the Buttons, Beggar’s Banquet and Let It Bleed. I guess that’s inevitable: as a kid, I thought of Frank Sinatra as the “Strangers in the Night” has-been, dooby-dooby-do, and shunned the recordings he made in the 1940s, DJ Jonathan Schwartz’s prodding notwithstanding. “Gimme Shelter” was the most electrifying song released in 1969; the Stones (and Merry Clayton) were in a trance, playing over their heads, surpassing even classics such as “Connection,” “My Obsession,” and “Jigsaw Puzzle.” Yet today—no thanks to Martin Scorsese, who’s a shameless star-fucker when it comes to 60s bands—“Gimme Shelter,” never mind “Satisfaction,” is played out.

I was reminded of all this upon reading a July 8 review of the Stones’ recent Hyde Park show—almost 44 years after they (sort of) commemorated the death of Brian Jones, with Mick in a dress and a white butterfly airlift gone awry, at the same locale. Andy Gill (born in 1956), in The Independent, was beside himself in rapturously describing what sounds like a perfectly awful occasion. He concludes: “It all builds to a glorious climax with ‘Sympathy for the Devil,’ played through a smokebomb pall against a fiery backdrop, Keith rasping out a piercing solo as the crowd starts up a chant of ‘whoo-whoo’ that later rings round Hyde Park Corner underground like the demonic mating-call of dedicated hedonists. Which, in a way, it is.”

Just as I have no quarrel with Bob Dylan playing 100 concerts a year—badly, as I discovered when accompanying my sons to his Washington, DC show last December—what Jagger and Richards do to make money, and maybe even have fun, is their own business. But as the underrated folk singer Fred Neil sang a long time ago, 1000 light years from home, you could say, that’s not the bag I’m in today.