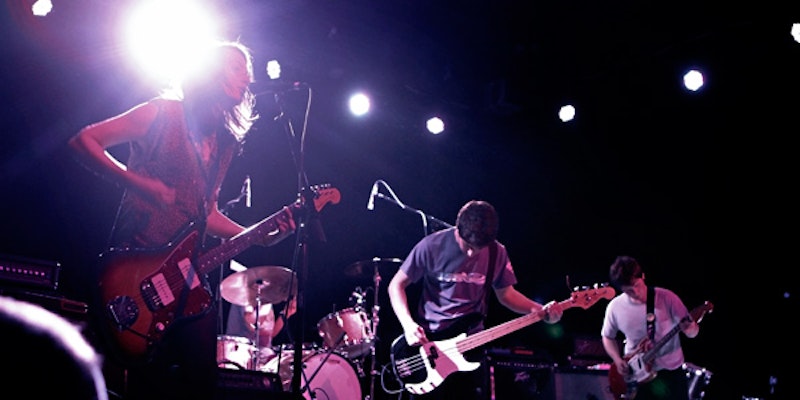 The anxiety of influence clings to all guitar rock bands in 2013, whether they like it or not. Every recommendation you might get will go something like “they sound like [x], mixed with a little [y] and [z], with a chick singer.” Maybe that’s because most young indie rock bands are woefully set in the ways of the past. Entire bands—like Yuck, Japandroids and Savages—are built out of cultural signifiers and ciphers that act as shortcuts to excitement instead of the real stuff. No Hendrix-like guitar virtuoso has appeared in the context of a rock band in ages. A lot of young guitarists don’t know their instruments that well outside of the limited scope of alternative rock. The vocabulary feels unnecessarily limited.

Speedy Ortiz understands that melody and catchy songs are more important than anything else. Frontwoman and songwriter Sadie Dupuis can sing and she writes interesting lyrics, already a step apart from most of her peers. If you can get your songs stuck in someone else’s head, where they’ll remain for days, weeks at a time, maybe even years, you’ve won their hearts. It feels like a disservice to a young band trying to make a living with no label support, a never-ending touring schedule, and the mirage of significance that Twitter imposes. But there’s no getting around Speedy’s Major Arcana’s debt to guitars of the past: the harmonics that open the record, quiet-loud structures, feedback squeals meant to seem errant but sound planned as plane tickets. The guitars are compressed as tight as coaxial cable, and they sound thick and jagged, sculpted to the last most obscure frequency. Because there are dozens upon dozens of other albums you could point to with similar guitar sounds and chord vocabulary, but there are so many things in the soup that any one checkpoint doesn’t suffice.

Anyone can play guitar, but the most valuable skill you can possess is an ear for simple, nursery-rhyme like melodies. The clash between the atonal thud of “Pioneer Spire”’s distorted guitars and Dupuis’ beautiful double-tracked vocals sounds instinctual and intuitive, crafted but executed as if writing hooks came as easily as sneezing. Dupuis is lyrically ambitious too, putting her pithy and idiomatic liners heads above the anonymous drivel of bands like Yuck, Surfer Blood, and DIIV. There’s a playfulness about Dupuis’ singing and the band’s calculated abandon that makes them more endearing than the smug Fairweather frontman with a big head and a bad attitude (see Ringo Deathstarr). The most promising side of Speedy Ortiz: they have what would have been a crossover pop hit with the soaring “No Below,” their “Bullet with Butterfly Wings”—“Spent the summer on crutches, and everybody teased”—Dupuis sings in the wounded voice of a depressed tweener, followed by an indelible loping guitar line that captures exactly the feeling that follows: “And they always said, I was better off as being dead.”