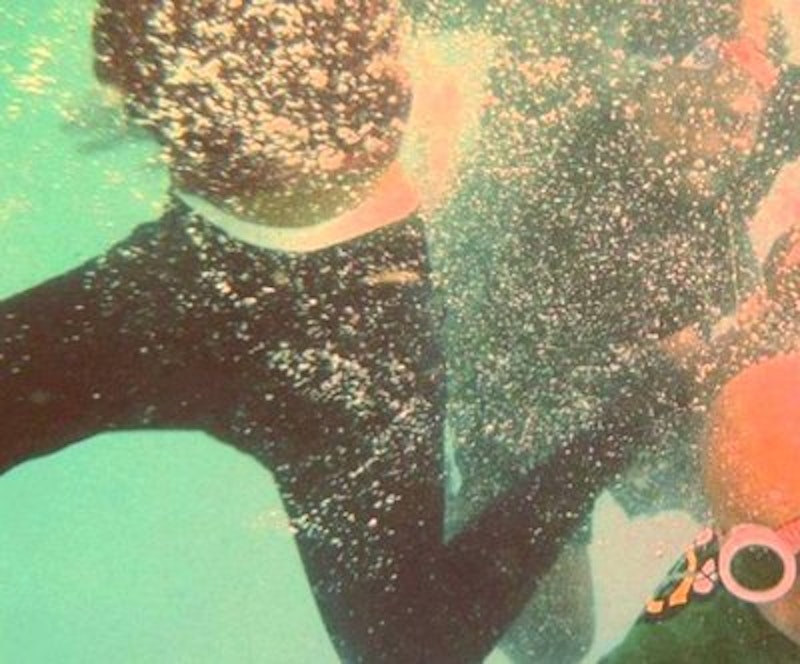 There was talk, earlier this year, of a dual, eventual Mark McGuire re-up: maybe a full-length and a couple shorter meditations. The Instinct EP arrived like a much-desired package does four to six weeks after you send away for it, unexpected and without fanfare and, as such, marvelously surprising. I love the things this former Emeralds member does with guitars, the way he makes them dance, ripple, and sing, but his tendency to interpolate home recordings is distracting, leaving me wondering who these strangers are and when they were trapped in tape-machine amber, to laugh and babble in perpetuity.

This issue is nowhere to be found on "The Instinct," where the guitars and fellow-traveler synthesizer effects are free to do all the talking, blinking, and burbling. In a way it reminds me of Hair Salon, a smart phone app game my son and nephew enjoy, where one may tease, shampoo, style, and otherwise blaspheme the locks of avatars humanoid and anthropomorphic beyond the bounds of good taste. McGuire's playing here is languid and sure, house-music expansive, space-rock fried, and hair disco wild, sometimes all at once, implying sidewalk squares, virtual reality tours of asteroid belts, Lindstrom's stellar Where You Go I Go Too.

The Internet's take on that most perennial of pop tropes—the performing artist serenading the significant other left behind at home for the sake of the extensive touring that's the bread and butter of most touring artists, these days—is characteristically lurid and lush, a sojourn in and of itself. Consoling reassurances, nods to exotic locales, and splashing drums consume the front half, pitch-shifting organs snaking through it all; "I don't want you/leaving on me," pleads Syd tha Kid, even as it sounds as though her mind's already a thousand miles gone. Then the song follows suit, blows town, goose-stepping deep into tremulous, effects filtered thickets of what might be guitar, might be vintage synthesizer, is probably queered harmonica at moments—a smoky forever-foyer that always reminds me of 1980s Stevie Wonder interludes where his producers were indulging his whims but ultimately the listener was the awed beneficiary. I go back and forth lately as to whether Feel Good will win a slot on my Top 10 albums of 2013 list; when I'm listening to "Pupil/The Patience" in the right mood, there's no question.

Tennis System, "You and Me Vrs"

I don't beg for music, typically, but I broke from this to beg for a taste of My Bloody Valentine's MBV on Facebook when that album dropped, mostly because I couldn't purchase it in a conventional sense and wanted it desperately. One friend obliged, perhaps too readily, because when I opened the zip file titled "MBV" I found Tennis System's Teenagers. It wasn't love at first listen, but look: I'm as much as a sucker for fake English mercurial shoegaze as anybody else (Tennis System is some dude from Cali). "You and Me Vrs" leapt out, probably because there's a molten-feedback tilt-a-whirl velocity to it—where the angst is checked until the chorus, when the singer really lets loose emotionally, like he'd been sulking in the corners of a one-room apartment and murmuring at someone, but then all of a sudden the chorus shoves its way out of him—and the backhanded reference to Joy Division's "Love Will Tear Us Apart," lyrically. The interesting thing is that Ian Curtis sang "love will tear us apart" with a grim, resigned fatalism, and here the phrase, howled, is "love will tear you apart," which means that the narrator is either a concerned observer or a jealous, concerned observer who wants in on the action.