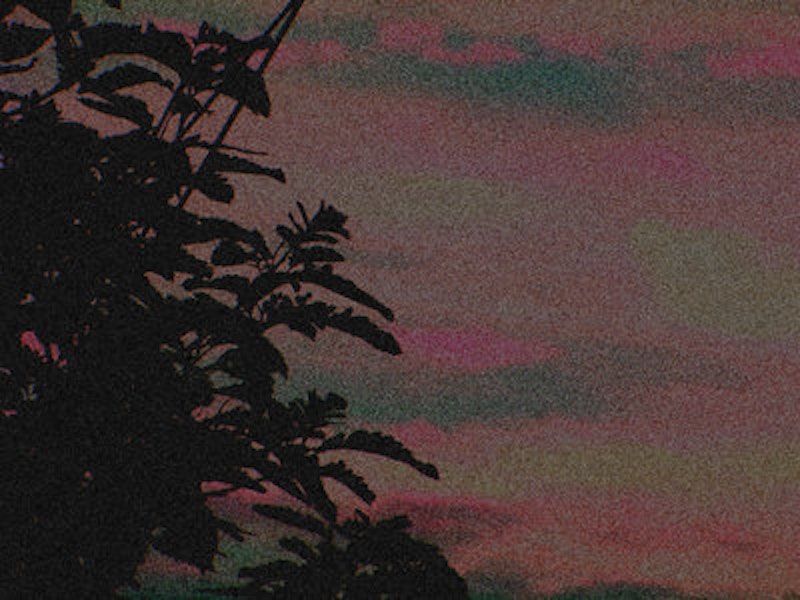 The album this track is taken from is titled My Personal Noise Virus, which explains a great deal: James Shearman evokes Darth Vader breathing into a microphone linked to a long, complicated network of underground pipes, until he begins to imply the nattering, enervating buzz of a damaged machine, until that gives way to what could be more aptly called guitar-associated feedback that cuts out at intervals that seem strategic but ultimately are revealed to be anything but, a dark energy survival knife carving merciless grooves deep into your cognition.

Noise opuses like this always reveal something to the listener given time, and on "M.P.N.V (No. 2)" that gift is the sense of being stationed in the center of some vast future garbage dump where droids are unloading an uncountable number of garbage loads that seem bottomless, and their cascade is constant, incessant, creating the impression that they will in fact never cease but somehow you will never actually be buried in waste: you will somehow always be rooted to that un-spared area there in the center, perpetually listening. Eventually, though, it just sounds as though Shearman has found a way to tear a papyrus scroll for the length of a mile.

Back when my son and I spent a lot more time drawing together—before he decided, mostly, that drawing was "boring"—I would sort through the billions of crayons he owned and select the ones that were alike, and create these very tight, coiled hails of hashmarks or super-compressed, intense shapes that would leave a lot of white space on the page. I'd do this, I guess, because a) I had no appetite for drawing people or houses or trees or cars, b) it allowed me to pretend I was some sort of avant garde modern artist, and/or c) it was a way to introduce my son to non-representational art without actually using the phrase "non-representational art." Sometimes the base would be clusters of aquamarines, blue-greens, blues, indigos, forest greens; at others I would dive headfirst into the world of reds, pinks, roses, and crimsons.

Too often, metal hits my ears like a repressed sexual onslaught of blacks, shadows, midnight blues, deep purples, with most successive iterations suggesting a rearrangement of those elements. Metalheads like to talk about the genre's humor, but I’d argue that the humor doesn't come across in a direct way to those of us who aren't paid or inclined to listen to most of it; it's just one gang of technically proficient lunkheads after another gang of technically proficient lunkheads, none of whom shave, unless your attention is divided and you're listening without really hearing something like "Black Death Horizon," in which case it may dump an extra pound or two of sugar in your Sanka or turn you into a slightly less careful driver.

Nothing Was The Same has just owned my car stereo lately, shuttling between where I used to live and where I live now, grocery store and department store, Chinese food joint and gas station, whatever: there's some shadowy allure and gravitas to this record that everything else Drake has released up until now lacked. In a text to a friend, I shorthanded it as "a concept album about how Drake's a womanizing dick," a description that applies to most of what Drake does, apart from looking ridiculous in almost every photograph taken of him. If Nothing Was The Same has a core or pivot point, "From Time" would have to be it, even though the magic here has very little to do with Drake himself.

Drake spits some verses about his dad and some exes and self-aspiration, which provides grit for 40's pitched low, melancholy production, which is deserving of a whole VFW hall full of Grammies. Pianos peal like flocks of drifting leaves and rain squirts; constellations of finger snaps keep the beat, sliding in and out of earshot; Aiko coos an assured hook for Drake to play off that carries a confidence he seems to lack. Up until the three-minute mark, listening to "From Time" is a lot like wandering through an impossibly beautiful, serene city after dark and wondering whether anyone actually lives there. Then, all of a sudden, "From Time" turns into a different song: 40 screws up the beat so it's a equilibrium-sabotaging wraith, with Drake talking shit in a way that's imitative of the unbidden spills memory sends you on as you get older. One moment you're looking at a building and thinking about something central to the present moment, and the next you're lost in a memory of a similar building, many years prior, a different array of emotions and associations, and it becomes necessary to steady yourself, to snap back into the now.

Note: It might well be said that you have not truly lived until you've attempted to listen to all of the songs featured in today's column simultaneously.