How have I gotten into my 40s without ever having heard the Chi-Lites? 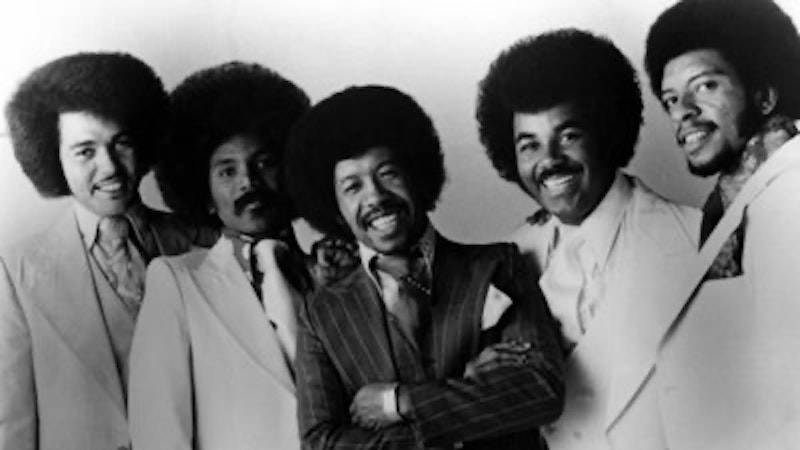 It was clearly a huge mistake. I've obsessively listened to their greatest hits for the last couple of weeks. Their biggest song, the 1971 smash "Have You Seen Her" is a dreamy piece of pop perfection, from that glorious stuttering fuzzed-out guitar opener, through Eugene Record's mournfully corny recitation ("One month ago today/I was happy as a lark/but now I go for walks/to the movies,/maybe to the park") and through the exquisite falsetto doo wop harmonies.

Part of what I love about the Chi-Lites is the way they stir together the macho aggressiveness of rock with the virile power of soul and come up with an intensely choreographed performance of vulnerability. The children who show up playing in the park in that opening recitation are a mirror of the singer himself; that plaintive "Have You Seen Her?" turns the abandoned lover into a child searching for his mother. Post-Beatles psychedelics and Southern soul meet in Chicago and age backwards—all that power laid transcendently low.

The Chi-Lites are just one of a number of mellow post-doo wop psychedelic soul groups from the 70s; they're normally grouped with bands like the Stylistics, the Spinners, or the Temptations. But oddly, the group that's fit most perfectly into my Chi-Lites obsession is one that is rarely mentioned in the same breath—indie rock legends Big Star.

Obviously, there are significant differences between Big Star and the Chi-Lites. Big Star's Alex Chilton is nowhere near as polished a singer as Eugene Record, and the garage rock drums give a much different propulsion than the Chi-Lites’ fluid groove. But there are bits that mirror each other as well. Big Star's "Jesus Christ" loves the fuzz guitar as much as "Have You Seen Her?", and Big Star utilizes doo-wopish group harmonies too. Like the Chi-Lites (and recording at more or less the same time), Big Star takes the Beatles version of Motown, or Memphis' version of the Beatles, and infantilizes it, to create seductively childish soul. "Oh, Girl, I'd be in trouble if I left you now," the Chi-Lites sing as the harmonica waah-waahs helplessly; to which Big Star replies, "I first saw you/you had on blue jeans"—as the feedback lilts helplessly. They're both overpowered by emotion; they both construct carefully arranged pop confections opening on pain.

Big Star was notoriously unsuccessful during the early 70s when the Chi-Lites were placing hit after hit on the charts. Nowadays, though, their fortunes have reversed. Big Star is central to the indie rock canon; they're constantly cited as influences on later bands like the Pixies. Their records are in print—even their third, which wasn't officially finished or released. In contrast, the Chi-Lites catalogue is a mess. There are several singles collections, but their original albums are mostly out of print.

Last week I wrote a piece for The New Republic about the way that indie music uses whiteness as a genre marker. This is true of American music generally: since the 1920s, when marketing executives separated hillbilly records and race records, critics, fans and even musicians have often grouped bands by skin color as much as by sound. That might have hurt Big Star in the 70s, when it couldn't get its particular brand of psychedelic soul a hearing. I think it certainly hurts the Chi-Lites now. If they were seen as eccentric genius indie pop, rather than as soul curiosities, their records would still be in print. And who knows how indie pop might be different if the Chi-Lites were in the place of Alex Chilton, or how neo-soul might be different if Chilton were in the place of the Chi-Lites?

Big Star and the Chi-Lites both demonstrate how black and white musicians freely mix black and white in their music. But they also show how genre and race can determine who listens to what music—and so, in the long run, what music gets made. "Oh, I hear her voice as the cold winds blow/In the sweet music on my radio," the Chi-Lites sing. You're always, already frozen by what you expect to hear, which is perhaps one reason why both bands' sweetness can seem so bitter.