This Is Not A Review

More of an enthusiastic endorsement of three African LPs. 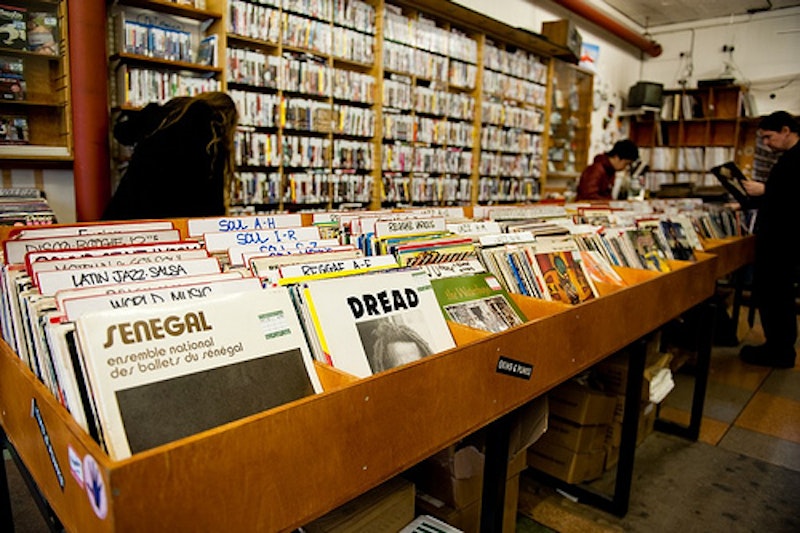 I’m about to drop a bombshell on ya’ll: There is a shit ton of great records out in the world, and I’m pretty sure it’s impossible to acquire and listen to all of them. Believe me, I’m trying. Whoa, “I know,” you’re saying, and “I don’t need you, Lloyd, to tell me that.” Well, sorry for stating the obvious, but it’s that uncomplicated truth (music > time) that necessitates things like reviews, and the abstract concept of popular music criticism. You’d have to trust the opinion of someone well versed in said genre, who would put a star rating or a letter grade next to a new release, compare it to a few similar albums and wrap it in a tight bundle of pith. Or at least, that’s the way it used to be. With YouTube and Myspace and Pandora and … the rest of the Internet, people who used to do that, like me, are increasingly irrelevant.

What has this got to do with three African LP reissues I picked up from Academy Records? Very little, but it’s my justification for having not managed to write a single article that could even be construed as a record review for the last couple of years, after writing hundreds for various outlets during college. I just can’t bring myself to do it. I’m going to try and hoist myself back on the wagon though, slowly, with what are closer to enthusiastic recommendations than critical reviews, in the hopes that the inherent vanity of passing (even positive) judgment on records originally released 35 years ago doesn’t obscure the goal of helping illuminate a few LP’s worth the hard-earned (or ill-begotten, still not trying to be too judgmental) money. And, you know, turn me back into a professional writer.

There are a few criteria I heed when buying reissues (and we’re talking vinyl LP’s here), that might seem a little arbitrary, but are all carefully considered before a spin through the “new” section at a record store; because, all things considered, I’d rather spend my money in the used section. First and foremost, is it a record you’re likely to track down an original pressing of? Without getting too preachy, original pressings trump reissues 99 percent of the time, for reasons I won’t delve into (that’s a whole other article). Without even looking it up, I’m certain that none of these three fetch less than three figures (more than I’ve ever paid for a record) and the odds of finding any of them outside of Africa, for anywhere approaching the $14 Academy charges for them, are slim to go-fuck-yourself if you pull one of these at a garage sale.

That doesn’t mean that every expensive record is worth reissuing; nor that obscurity is enough incentive on its own. I’m attracted to the idea of limited releases, because it’s kind of cool to know that you are one of only a thousand people to own a particular object, but the point isn’t to make cool kids with cool taste feel even cooler (or as some might see it, make nerds feel nerdier). The point is to spread worthwhile music that was ignored the first time around for reasons that had little to do with the quality of the jams between the grooves.

A great story never hurts, and all three of these reissues, the first three on Academy Records (also a physical store in Brooklyn), have well-written, detailed liner notes that provide just enough context to enhance the listening experience.

The first in the series, Ofege’s Try and Love, is the 1974 debut of a group of high school students from Lagos, Nigeria. The group describes climbing fences and sneaking out at odd hours to hit the recording studio, but the music is at odds with the circumstances. The ebullient, slightly psychedelic anthems are all bright harmonies and seasoned song-craft—not the sound of a bunch of fly-by-night teenagers. Santana, among other classic rock groups of the era, is name checked as an influence, but I don’t see it. I don’t think that dude ever played a chord in his life, and the guitars here are thicker and stickier than Blue Cheer.

SJOB Movement, also from Nigeria, were veterans of the afro-funk scene, acting as Sonny Okosun’s popular group before cutting A Move in the Right Direction. The album’s title is pretty on-point if the right direction in question is outer space. There are a lot of killer fuzzy, spacey African funk records, but what sets this one apart is hard to nail down. For one, the group weaves electric keyboards with tight guitar patterns, and does so over constantly evolving grooves. The effect is hypnotic, but the kind of hypnosis where the hypno-therapist makes you do all sorts of funny stuff while you’re vulnerable. I could see this band sharing a pretty thrilling cross-continental bill with Sly and The Family Stone.

The last Nigerian LP in the trio has a similar vibe to SJOB, but with the added charm of a four-piece horn section. On Volume 1: Blood Brothers by Mebusas, there’s still a touch of psychedelia in the guitar leads, the element (besides Nigeria) all three of these releases have in common, but the group is more James Brown than Jimi Hendrix. There’s a dash of Fela in there too if you look hard enough, but at least ideologically, they remind me more of Cymande than any of those other familiar touchstones.

I don’t think I could assign ratings to any of these records, but I can give them my fullest endorsement—they aren’t leaving my record collection until you can pry them from my cold, dead hands.