These United States: A Video Retrospective

Their 35-minute long Secret Garden Session for music blog Hooves on the Turf was posted today—complete with live performances and conversations about the aesthetics of great music. Now: a look back. 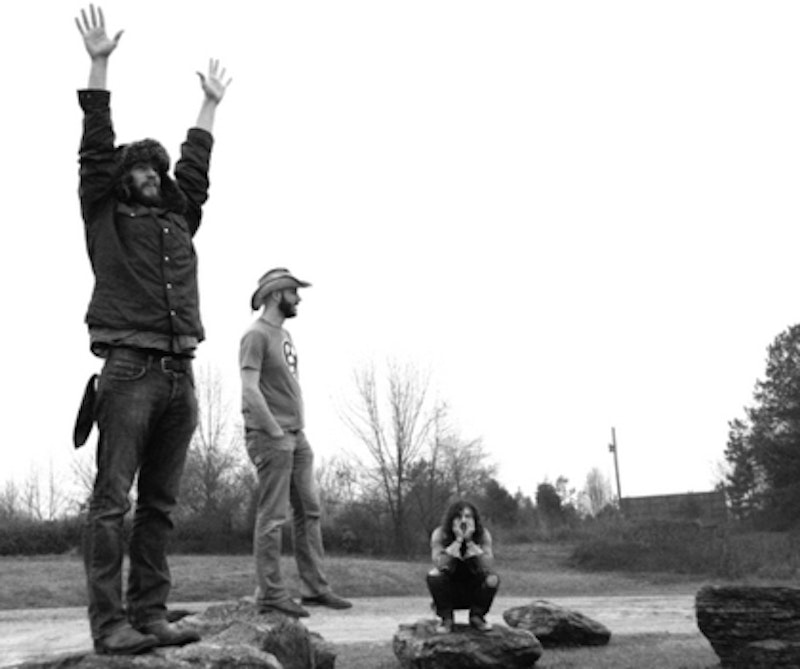 I first saw D.C. folk rockers These United States in the run-down basement of the Charm City Art Space a couple years back—when frontman Jesse Elliott looked a little less like a cowboy Che Guevara and his only backup was Tom Hnatow, switching off on guitar, lap steel and banjo. I'd never heard of them before. I remember Jesse joked about his poor setup, including the beat-up old practice amp he was using: "Oh man, have you all seen my hot cab?" He laughed. He had to have been high. But he had this wonderful, warm friendliness that made you feel like you heard all these songs before, that you knew every word. Hell, he might have written them hanging around your house one day. This was before the first album, A Picture of the Three of Us at the Gate to the Garden of Eden, which, I’ll be honest, I didn’t much care for. David Strackany’s (a.k.a Paleo) production had too much psych-electronica to it. Except for “The Business” and “Kings and Aces”—recordings of which had been around for at least a year or two prior—there was none of the bar-rock rowdiness that made their live shows so fucking good. It’s not a bad album, and I understand why Strackany wanted to prioritize Jesse's lyrics—you hear a song like "So High So Low So Wide So Long" and you're sure he's read On the Road and "Howl"  and listened to Blonde on Blonde no less that a thousand times. But it’s not the These United States I know and love. Compare the album version of “So High So Low So Wide So Long” with the live version:

(Not that this song is a particularly good example of “bar rock rowdiness,” but I think you get the point.)

Their second album, however, Crimes, doesn’t have this problem at all—with a full band, Elliott tears it up pretty hard, e.g. Honor Amongst Thieves. With Mark Charles (Vandaveer) on bass and backing vocals and Robby Corenza on drums, Jesse, Tom, and Josh Reed (Revival) go guitar heavy, Allman Brothers style, trading off on bluesy country solos. With their “Secret Garden Session” posted today over at Hooves on the Turf (preview below), I figured it was high time to compile some of the best These United States videos I’ve come across in the last few months.


Trailer: These United States at Secret Garden from hoovesontheturf on Vimeo.

"Here Comes Cain" for SnowGhost Music. Half a dozen more videos (along with photos and mp3s) here.

"What Do You Want With My Heart" for AdultAlternative.co.uk.

Three minutes with the band in Mexico. Who made it, why they made it... Hard to say.