From almanacs to sweaters, this is the music of fall. 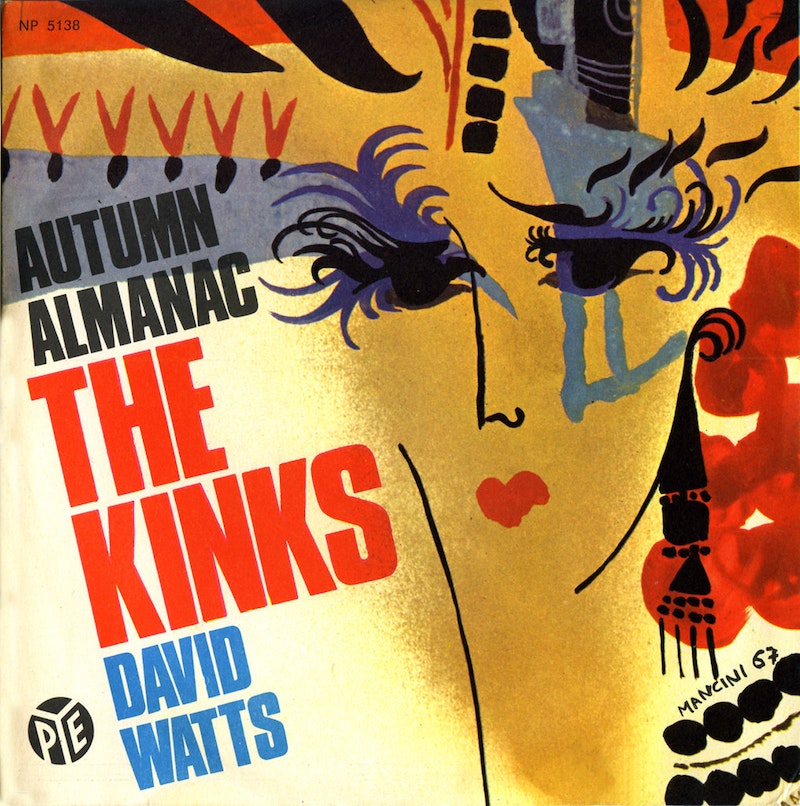 "November," written and performed by Tom Waits (1993): Those hailing from warmer climes may not be able to appreciate the unsparing bleakness and despair of this atmospheric, fear-steeped contribution from Tom Waits. On the other hand, those who've grown to dread frigid northern winters and view November as the gateway month into them may be moved by the stark desperation and hopelessness expressed in every line. Here's an example: "November has tied me to an old dead tree/Get word to April to rescue me."

There's a wistfulness to some autumn songs about leaving the joys of summer behind, but "November," which falls in the "dark cabaret" genre, is pure doom and gloom, beginning with the chilling wailing sounds in the intro. Waits' hoarse rasp of a voice is the perfect vehicle to convey the season-based message of anguish. "Go away, blow your brains out, November," he sings. Get your winter gear out and prepare for the worst. November's coming soon. It's the month that "only believes/In a pile of dead leaves/And a moon that's the color of bone."

"Harvest Moon," written and performed by Neil Young (1992): The Canadian-born singer/songwriter has a quasi-religious fascination with the moon—it appears in 28 of his songs. "The moon means a lot to me," he wrote In his memoir, Waging Heavy Peace. "All things natural speak to me with the rhythm that I feel." "Harvest Moon," a late-career gem, is a whimsical tribute to enduring love, with Linda Ronstadt providing backup vocals. But the love has endured in an unusual way, as expressed in this lyric: "When we were lovers, I loved you with all my heart." The relationship is in the past, but the harvest moon has inspired the narrator to rekindle thoughts of love: "Because I'm still in love with you/I want to see you dance again/because I'm still in love with you/on this harvest moon."

Young’s known for his artistic restlessness. He's resisted settling into a comfortable, predictable groove. After spending the 1980s experimenting with rockabilly, hard-edged electric rock, and guitar noise, with "Harvest Moon" he returned to his roots with a gentle acoustic sound reminiscent of his countryish 1972 album, Harvest. The melody's soft and sweet, carried along by Young's acoustic guitar and delicate vocals, a picked steel guitar, and mellow percussion.

“Autumn's Not That Cold,” written and performed by Lorrie Morgan (1991): Country singer Lorrie Morgan delivers a refreshing twist on the breakup song here—she's not broken up after the guy leaves, which is what the title of the song refers to. Here's another way she puts it: "Back here the leaves are turning on me just like you/change is full of color and it's anything but blue." He left at the end of the summer, and now it's October and "the leaves are turning gold," but "the hurts not taking hold." She almost feels guilty about it too. By the time winter arrives she'll be looking forward to another spring rather than looking back.

The sparse arrangement is just a piano and strings, with Morgan's lovely voice front and center. It's a simple song with a clear message: people surprise themselves sometimes with their strength. This song's the antidote to country songs like Merle Haggard's "Tonight the Bottle Let Me Down," in which a man needs to drink away the memory of lost love, or George Jones' "He Stopped Loving Her Today," the story of a man who loved the woman who'd left him until the day she was lowered into her grave.

"September Song," written by Kurt Weill and Maxwell Anderson; performed by Frank Sinatra (1965): Sinatra's singing about the metaphorical autumn that refers to one's "golden years" and their attendant changes. The narrator's grown older and has lost patience for the leisurely courting rituals he used to favor: "When I was a young man courting the girls/I played me a waiting game/if a maid refused me with tossing curls/I'd let the old earth take a couple of whirls." But as years add up, and "the days dwindle down to a precious few," Sinatra sings a different tune: "When the autumn weather turns the leaves to flame/one hasn't got time for the waiting game."

Sinatra, a master of self-reflection, explored similar emotional terrain with his brilliant version of "It Was A Very Good Year.” With his signature phrasing and impeccable diction, he takes the listener from the carefree nature of youth to the resigned contentment that comes with maturity: "Oh, the days dwindle down to a precious few/September, November and these few precious days I'll spend with you/these precious days I'll spend with you."

“Autumn Almanac," written by Ray Davies; performed by The Kinks (1967): Who else but Ray Davies writes a song with "almanac” in the title? "Breeze blows leaves of a musty-colored yellow/so I sweep them in my sack/yes, yes, yes, it's my autumn almanac." No band has ever chronicled the everyday details of English life with the keen observational skills of The Kinks, and you couldn't find a more English song than this one. Davies said that, as the leaves were falling one year, he was inspired to write this baroque-sounding tune by a local hunch-backed gardener in his Muswell Hill neighborhood in North London who used to be one of his dad's old drinking buddies. The songwriter channels the gardener's thoughts with his lyrics. There's "football on a Saturday," "roast beef on Sunday," "holidays in Blackpool," and the narrator's never going to leave the street that he lives on.

This song has evocative lyrics, wry vocals from Davies accented with backup vocals from the band, and some experimental flourishes like tape-manipulated feedback and backwards guitar. There's not a trace of melancholy in "Autumn Almanac. It's just one cheerful, celebratory groove.

"Autumn Sweater," written by Ira Kaplan, Georgia Hubley, and James McNew; performed by Yo La Tengo: Plenty of Yo La Tengo fans think this is the indie rockers' best song ever. The intro's a catchy bass drum and high-hat groove reminiscent of the intro of the Beatles' "Tomorrow Never Knows." An organ comes in, and that's pretty much the entire arrangement. The lyrics, which are open to interpretation, suggest insecurity and regret about what's about to happen or what has already happened. Ira Kaplan conveys those emotions with his tentative, halting vocal delivery: "Is it too late to call this off?/we could slip away/wouldn't that be better?/me with nothing to say/and you in your autumn sweater." Call what off? Whatever’s being planned, the narrator is trepidatious about it and pondering an alternative plan. Instead they could slip away so it could be good like it was in the beginning, as symbolized by the comforting imagery of the "autumn sweater."

“Autumn in New York,” written by Vernon Duke; performed by Ella Fitzgerald and Louis Armstrong (1957): This jazz standard is a love song to a city―a city that has escaped the beastly heat of a New York summer and can now display its full splendor. Even the rougher parts of town shine with the change of seasons: “This autumn in New York/transforms the slums into Mayfair.” There are "shimmering clouds" and "gleaming rooftops at sundown."

The simple arrangement—just a piano—highlights the vocals from two legends. It's Ella Fitzgerald's silky smooth delivery contrasting with Louis Armstrong's growl. This song has the ability to transport you to a crisp autumn afternoon in Central Park where the leaves are ablaze.

The original song, “Les Feuilles Mortes," was a dark and rambling lament, but Mercer's version, with its spiraling 16-bar refrain, was more bittersweet than bitter. It was a perfect fit for Cole's soft baritone, and it climbed to the top of the charts. The narrator's addressing a lover who's left him. The autumn always triggers his melancholy over the loss. You can hear the pain in Cole's voice when he sings, "But I miss you most of all my darling/when autumn leaves start to fall."

"Chill of an Early Fall," written by Daniel Green and Gretchen Peters; performed by George Strait (1991): Once again, the fall season is used as a metaphor for sadness. The narrator’s a man who suspects that his lover is cheating on him with someone she calls her "old friend." He feels "the chill of an early fall" coming on when this man stops by to visit her: "Here it comes again/that same old chilly wind will blow like a cold winter squall." Not knowing whether he's just a friend has him tied up in knots, so he does what a man in a country song does in that situation—he hits the bottle: "And I'll begin to feel the chill of an early fall/and I'll be drinking again and thinking whenever he calls."

"Autumn Serenade," written by Peter DeRose and Sammy Gallop; performed by Johnny Hartman and John Coltrane (1963): "Autumn Serenade" is the final track on Hartman and Coltrane's brilliant album of ballads, John Coltrane and Johnny Hartman. Vocalist Hartman said the song, which also features McCoy Tyner on piano and Elvin Jones on drums, was done in one take. This is familiar autumn-song material, with a love that burned bright until October, but this collaboration takes it to the next level. Hartman's gorgeous voice was made to song love songs. Add Coltrane's accompaniment on saxophone and this one's a necessary addition to your fall playlist.