The Top 10 Songs About Working Life

It's a topic everyone can relate to. 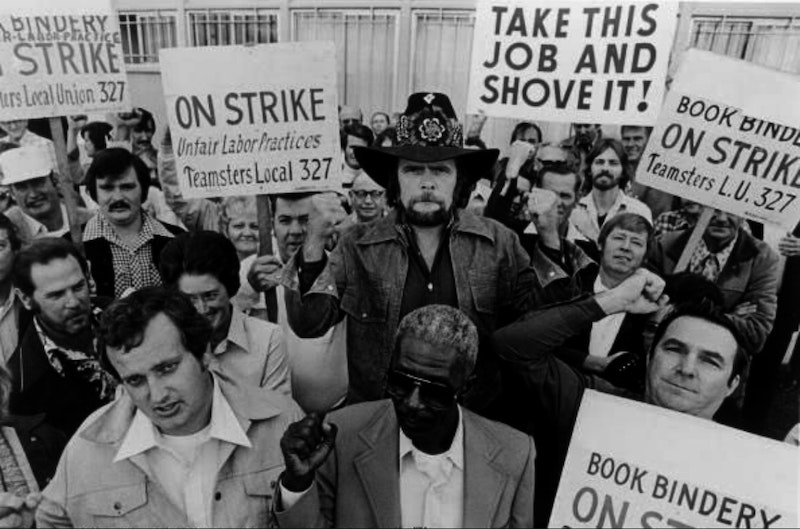 Work has been a popular subject of pop songs for as long as they've been written. That's hardly a surprise, as the job is central to everyone's life. Some hate it, some love it, and some both love and hate it. The following songs about working contain the gamut of emotions on the topic.

"A Hard Day's Night," written by John Lennon and Paul McCartney; performed by the Beatles (1964): The single-chord intro that George Harrison plays on his Rickenbacker 12-string guitar is perhaps the most memorable chord in rock 'n’ roll history. This composition is both a working man's lament and a love song with an infectious sound. The story's a simple one of a guy who works hard to buy his woman things, but when he gets home to her she makes him feel like everything's worth it: "And when I get home to you/you know the things that you do/will make me feel alright." On balance, he's got no complaints about the working life. The Lennon/McCartney vocal duo is at its finest here.

"Working Man Blues," written by Merle Haggard; performed by Merle Haggard and the Strangers (1969): Few musicians have chronicled the plight of the working man with as much empathy as Merle Haggard. This rocking, resigned tribute to a guy who has to bust his ass in order to provide for nine children is a fine example of the country music sub-genre known as the "Bakersfield Sound," which emerged in the 1950s in that California town as a rootsy, stripped-down reaction to the slick, orchestral arrangements that Nashville was pumping out at the time for commercial reasons.

The narrator sometimes dreams of running away and tossing his bills out the window but realizes that's just a temporary fantasy. He knows he's got to buy his kid a brand new pair of shoes, plus, "I ain't never been on welfare/'n that's one place I won't be." It's blue-collar pride in a life of struggle that doesn't include taking any handouts. The Strangers were a band of crack instrumentalists, but the crisp, twangy Roy Nichols guitar work is the song's musical highlight. You can hear why Haggard kept him as his lead guitarist for over 20 years.

"Chain Gang," written and performed by Sam Cooke (1960): In 1959, while touring the South, Cooke happened upon a chain gang of prisoners toiling beside a Georgia road. As the story goes, after the singer/songwriter got out of his car and shook hands with some of the prisoners, he passed out cartons of cigarettes to them. This chance encounter would serve as the inspiration for his second most popular song on the American pop charts.

The song begins with several repetitions of "hoo, ahh," as "that's the sound of the men working on the chain gang." Cooke loved turning everyday experiences into songs, but this was a new angle for him. He was creating an empathetic connection between himself and people who had it rough: "All day long they work so hard/till the sun is goin’ down/thinking of their women at home/in their silken gowns." Cooke's reminding listeners that forced celibacy is part of an inmate's sentence.

In the final verse, the singer assumes the role of a prisoner: "I’m goin’ home one of these days/I’m going home/see my woman whom I love so dear/but meanwhile I got to work right here." Cooke, with this song, was able to humanize a group of people society tends to write off as beyond redemption.

"Blowin' Smoke," written by Kacey Musgraves, Shane McAnally and Luke Laird; performed by Kacey Musgraves (2013): With this rhythmic country blues song, Musgraves delivers the musical equivalent of Martin Scorsese's 1974 film, Alice Doesn't Live Here Anymore. The title refers to the waitresses in a diner who talk about quitting one day, but it's only talk—they're just "blowing smoke." Musgraves sings, "Wipe down the bar/take out the trash/light one up and count my cash/swear I'm never coming back again." But, of course, she comes back every day.

The song opens with authentic diner sounds that the songwriter said Luke Laird recorded on his phone at an L.A. Waffle House. While the song's about a specific work environment, it deals with the universal theme of people talking about how they're going to improve their lives but not actually doing anything about it. There's also a hint of jealousy about a waitress who escaped the drudgery: "between the lunch and dinner rush/Kelly caught that outbound bus for Vegas/we're all out here talking trash, making bets/lips wrapped 'round our cigarettes/she always thought she was too good to be a waitress." The narrator thinks she's too good for that life as well; she just doesn't do anything about it.

"Work To Do," written by O'Kelly Isley, Jr., Rudolph Isley, and Ronald Isley; performed by the Isley Brothers (1972): Work-related songs are not numerous in the soul-funk genre, but the Isley Brothers deliver the goods with this exuberant number that should be the wake-up song for every hungry young hustler trying to claw their way to the top. There's none of the usual complaining about the job here. Rather, it's all about, "I've got a job to do/and I can't let anything stop me," because "it takes a lot of money to make it." This guy's going somewhere. You can hear it in Ronald Isley's voice as he settles into the band's irresistible groove.

"Take This Job and Shove it," written by David Allan Coe; performed by Johnny Paycheck (1977): This 1970s country hit (two weeks at number one, and Paycheck's only number one) is the ultimate fantasy song for the multitudes who've dreamed of telling the boss to drop dead before leaving their crummy job in the middle of a shift. It contains a universal sentiment: "Take this job and shove it/I ain't workin here no more."

The narrator's woman has left him, so he has no more incentive to endure the factory job's indignities and drudgery. This song'sabout the defiant words the country-music outlaw sings. The musical arrangement isn't particularly memorable, but the harmonica adds some nice color. There's one thing about this song that few people know—it's just a fantasy that the narrator's dreaming about, which you wouldn't know unless you listen to it carefully.

“Amarillo By Morning,” written by Terry Stafford and Paul Fraser; performed by George Strait (1982): This is a song about a journeyman working on the rodeo circuit at state fairs. He's not a star, so his life is challenging. The words Strait sings must appeal to liberty-loving Texans, because despite the hardships of the job, he's still got his freedom: “I ain’t rich but Lord I’m free.”

The subject is rodeo work, but the romantic theme is common: It's possible to find satisfaction in a job that doesn't pay you enough to live a normal life: "Everything that I've got/is just what I've got on/I ain't got a dime/but what I got is mine." It's a bittersweet account of the tenacity of the working man, despite an accumulation of disappointments and heartache. In a sense, it's the perfect country song.

“Car Wash,” written by Norman Whitfield; performed by Rose Royce (1976): This song, from the soundtrack of the movie Car Wash, was disco/funk band Rose Royce’s biggest commercial hit. Lead singer Gwen Dickey sings, “You might not ever get rich/but let me tell ya/it's better than diggin' a ditch.” But she makes it sound a lot better than digging a ditch, which is appropriate for a comedy movie. Her car wash is a laid back, very “seventies” place with a cool boss: “Let me tell you it's always cool/and the boss don't mind sometimes if you act a fool.” You could probably smoke a joint on your break there, and the boss would just wink at you.

“Car Wash” is the song to clap along to. Numerous R&B and hip-hop artists have sampled the hand claps at the beginning. The unforgettable intro layers on the song's instrumental components one at a time. First there's the hand claps, and then the bass, the guitar, and finally the disco beat kicks in. “Car Wash” makes me want to travel in time back to the 1970s and never come back.

"Working In a Coal Mine," written by Allen Toussaint; performed by Lee Dorsey (1966): Dorsey had an international hit with this song about working one of the worst jobs on earth, but he doesn't give it the somber treatment. If you watched his performance without hearing the lyrics, you might think he was singing about driving in his car with his girlfriend to get a milkshake. The singer's natural enthusiasm turned a tune about misery into an upbeat sing-along song. There's nothing upbeat about the words though: "Haulin' coal by the ton/when Saturday rolls around/I'm too tired for havin' fun/workin' in the coal mine/goin' on down, down."

"Sixteen Tons" could be interpreted as an anthem to labor unions. It references the unfair labor practice of paying workers in scrip that they could only spend at the "company store," which ripped them off: "I can't afford to die. I owe my soul to the company store." It makes you think about the sacrifices made by the men who built this country. Working men slave away underground, while the mine owner lives a life of luxury. It’d be difficult to find an expression of futility as desperate as this: "You load sixteen tons/what do you get?/another day older/and deeper in debt."