HAIM's new album Women in Music Pt. III is an astounding work by the trio of sisters. 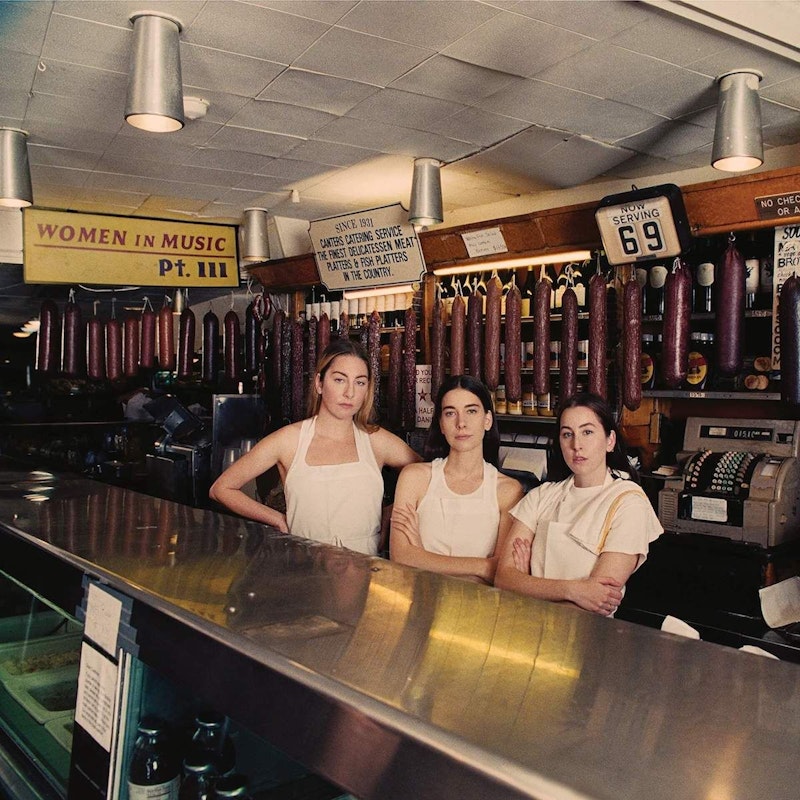 On HAIM’s outstanding new album, Women in Music Pt. III, Danielle Haim pushes her voice into the recesses of a sampled, heavily produced blur. She’s there and she’s not, and the ambivalence that ambiguous status represents is all over the entire LP. Like rock ‘n’ roll itself in 2020, like the people you prepare a face to meet on Zoom, like the presence of a fleeting emotion, she’s a ghost of herself, trying to understand the tracks she leaves in the sand before the next wave erases them. Her sisters bring the noise, but it’s intimately done, as if it’s the noise inside the singer’s own head. The drums walk a wayward path forward, marching without giving up. The guitar flashes and ducks. There are alarm clocks that blare at one point, as though she’s trying without success to wake herself up to the reality of her life.

HAIM has stated that the album’s about using anger to overcome sadness and pain, but that mantra’s a far cry from the way the album sounds. “Every time I think I’ve taken a step, you end up mad at me for makin’ a mess,” Danielle sings. “I can understand, but you don’t understa-a-and me,” she adds, lost in a relationship that can’t bring her the solace she’s trying to find. In the album’s search for romantic love, set against the sceney backdrop of Los Angeles, it recalls the best work of Joni Mitchell and Liz Phair. They’re both artists who seemed too restless to let mediocre men define them, but who also couldn’t stop themselves from trying to get in the last word in private arguments vividly rendered. In general, the album feels like the best of the 1970s, from the way Danielle coos “honey” to her lovers, to the Eagles-like mirage of a debauched life that doesn’t hurt too much but never brings peace.

For Millennials like HAIM, living in a redux of the Me Generation, compassion is something that has to be re-discovered. “We’ve both had nights/In a stranger’s bed/But I don’t wanna give up yet,” she sings at one point, hesitantly drawing a line between herself and her partner’s identically bad behavior. “We” is a potent word for HAIM, underscoring both the telepathic tightness of the sisters playing together, and the achievement of a romantic unison that’s always just out of reach. The songs are broken pieces; in “Now I’m In It,” HAIM puts the bridge at the end of the song, as if it’s an afterthought to add more melodic beauty to a song that’s already weightless and energized. The feeling of a shattered life is everywhere, and the tentative feel of each melody brings out an incoherence that’s always lurking and threatening the speaker like shrapnel under her skin.

“It takes all I’ve got/Not to fuck this up,” HAIM sings on “Leaning on You”: “So won’t you let me know/If I’m not alone.” It’s tempting to bring anything and everything that comes out now into focus through the vehicle of COVID-19, but here that move makes good sense; this is an album for everyone who feels like their quarantine has been just an intensification of the tectonic drift that infects modern life. In a world where we already depend on Facebook for social validation, and on Instagram to learn how good other people have it, the album reaches out energetically for connection: “I’ve been watching too much TV/ Staring up at the ceiling/It’s been making me feel creepy,” Danielle admits. The album’s folkie angles seem distinctly nostalgic, like the haze between those finger-picked guitars and is the time between the utopian era of rock and now, or the distance between the good things in life and the life we lead without them.

Perhaps the anger the band is searching for, to find a release from being sad, is in the devastating put-downs that propel every song forward. “I don’t want to hear ‘it is what it is/It was what it was,’” HAIM announces, ready to find out a new meaning in the past that would bring the present to account. Their disappointment in everyone around them is invigorating; they sound as snotty and hyper-aware as Bob Dylan at his best. This is a headphone album that sounds pretty good on speakers, but lacks detail heard that way; it’s an album that lets you stare at your ceiling without feeling creepy, for once, as you crawl inside the shell of yourself to do some long overdue work. When Tom Wolfe described the “Me Generation” of the 1970s, he meant it as a put-down, but here the introspection rocks like a successful therapy session, full of tears and things usually left unsaid.

Women in Music Pt. III has more chops than it dares to explore in depth; at the beginning of “FUBT,” a song whose title means “It’s Fucked Up But It’s True,” they roll out chiming, warped guitars straight out of a hit by the Red Hot Chili Peppers. But they hide those same guitars behind slow crests of low synth, as if unwilling to bring a song to a climax they never managed to find in real life... and then, in a sudden reversal, they go for it, lifting their guitars to the sky while Danielle unleashes a solo that’s as heavy as it is revelatory. It ain’t real, but it ought to be, and for a minute that’s enough.

The end of the album dares to call itself “Hallelujah,” even with Leonard Cohen looking over their shoulders, and all the pretense falls away: “You were there to protect me like a shield,” Danielle sings gratefully, “Why me? How’d I get this hallelujah?” On the best moments in this seamless work of art, the joy’s so pure and unexpected, it bursts from the rocks of accumulated pain like a quenching spring. Beyond strained compassion, there’s a place of empathy where we get to share in each other’s joy, but it’s elusive. When the three sisters find it all together, they are surprised, and so are we. HAIM sweeps us up, in their moment of release, and when their audience comes to earth again, we find ourselves somewhere that’s new.