The Rock Princess and the Pop Rebel

Hayley Williams of Paramore and Demi Lovato make the same kind of music, so why aren’t they played on the same radio stations? 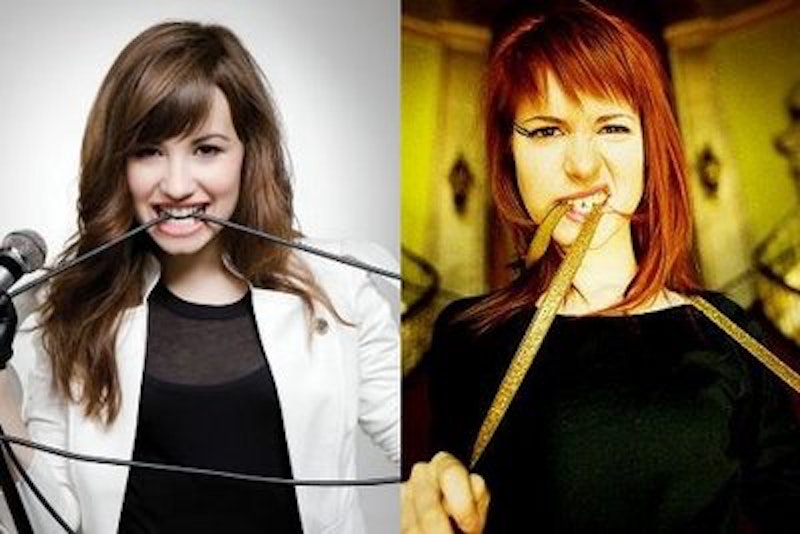 Let’s talk about two young women that have both dented the pop charts with hit albums in the past few months. One of them is a singer who’s an old family friend of Miley Cyrus, and has spoken publicly about her Christian faith and love of pop music. The other is a singer and guitarist who’s an avowed heavy metal fan, and has made tabloid headlines with her alleged tendency to cut herself.

The singers I just described are Williams of the emo band Paramore, and Disney Channel darling Lovato. But here’s the twist: Rock star Williams is the wholesome, pious friend of Cyrus, and pop princess Lovato is the (supposed) cutter who likes to bang her head to black metal. In July, Lovato’s sophomore album Here We Go Again debuted at #1 on the Billboard charts, and Paramore’s third album brand new eyes splashed at #2 in September. They both make the same kind of music, a polished brand of guitar-driven pop/rock, and sing in voices that can soar with melody, but carry the nasal Valley affectations of a modern teenage girl. But Paramore is a champion of the alternative rock chart, where they’ve scored four top 10 singles, whereas Lovato gets her heaviest rotation on Radio Disney. Obviously, there’s some kind of disconnect here that goes well beyond music.

Ultimately, it’s all about their respective career paths and their presentation. Both released their debut albums at the age of 16. Williams formed Paramore with a few high school friends, and signed to Fueled By Ramen, the independent label that launched the careers of bands like Fall Out Boy. Lovato, who’d been a child actress since the age of six, released her debut Don’t Forget on Hollywood Records last year after appearing in several Disney Channel programs, including the movie Camp Rock.

Williams, now 20, writes songs with her Paramore bandmates, a bunch of scruffy-looking young guys with angular haircuts. Lovato, 17, got help from fellow teen idols the Jonas Brothers writing her first album, and has since worked with a number of other music industry pros and established stars like John Mayer. Williams is known for her mane of hair, dyed a bright shade of orange, while Lovato has an unfortunate tendency to wear dorky-looking vests and hats that bring to mind Mayim Bialik of Blossom, and stars in a Disney sitcom called Sunny With A Chance that’s itself about as cheesy as Blossom. The teen pop hit factory churned out Lovato’s two albums 10 months apart, while Paramore tours relentlessly for two years between each album. Lovato tours with American Idol pipsqueak David Archuleta, while Paramore goes out on the Warped Tour.

But this is less about the careers of these two women than it is about the trajectories of punk pop, and pop music as a whole over the past decade. Ten years ago, Blink 182 got onto TRL by lampooning boy bands like the Backstreet Boys in the “All The Small Things” video, and ended up with much of the same teenybopper audience they were mocking.

From there, popular emo and punk bands have become more and more polished and MTV-ready, and pop starlets have begun picking up guitars and sneering more. That trend started with Avril Lavigne in 2002, but ever since Kelly Clarkson’s “Since U Been Gone” in 2004, chugging riffs and big rock choruses have been the sound of choice for more female pop singers than, say, the crisp techno pop that Britney Spears still makes. Punk and pop have been meeting each other halfway for so long it’s difficult to distinguish between the two.

Regardless of how you categorize them, however, brand new eyes and Here We Go Again are two of the best major label rock albums of the year, and any fan of one should enjoy the other. Another thing Williams and Lovato have in common is that they’re not quite at the top of their respective field. Paramore is neither the biggest emo crossover story in recent years nor have they reached the multi-platinum heights of many other female-fronted rock acts like No Doubt or Evanescence. And Lovato isn’t nearly as big a tween phenomenon as Miley or Taylor Swift. But they both deserve to get bigger and bigger, and I hope that as they do, they and their fan bases will realize the common ground between them.