Growing Up Is Real

A double review of tUnE-yArDs' BiRd-BrAiNs and Wildlife from Headlights. 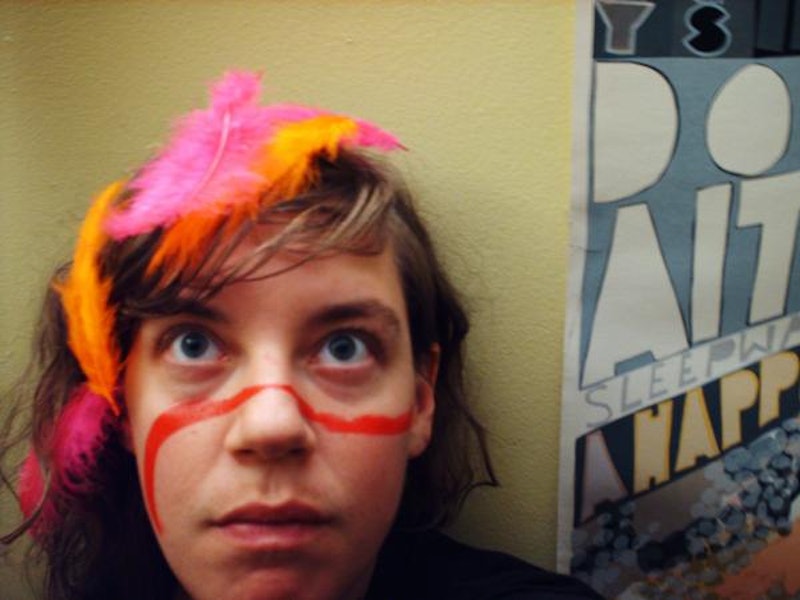 Merrill Garbus is the one-woman band behind tUnE-yArDs. Her debut, BiRd-BrAiNs, was originally released in 2008 under the In Rainbows pay-what-you-want model, but was officially re-released last month by 4AD. Garbus, whose vocals are alternately pleasantly gentle or booming, strums rough ukulele chords overtop found sounds and looped drum beats, proving that the DIY lo-fi sound (everything was recorded on a digitial voice recorder) still has much to offer. Despite the couple of cutesy Moldy Peaches-esque folk songs here, BiRd-BrAiNs generally sounds like some kind of island World Music spin on CocoRosie (I mean that in the best possible way).

If at the times it sounds like the album is about to unravel completely that only works in its favor. Consider the end of "JAMAICAN," where Garbus piles on more and more cluttered noise as the song goes on—what sounds like brief clips of phase distortion, electric saw static, wood block clomping, etc.—and then cuts it off just before it starts to wear on you. Even simpler songs like "HATARI," where the ukulele and drum beat clash throughout, end up sounding raucously fun, not sloppy.

BiRd-BrAiNs is charming and beautiful as a complete work, but that's not to say there isn't a fair amount of filler here: songs like "FOR YOU," "SAFETY," and "NEWS," for example, are perfectly good, just not as well worked out as others. The real highlights on BiRd-BrAiNs include "SUNLIGHT," "FIYA," "LIONS," and "LITTLE TIGER." All songs where Garbus' amazing voice dominate.

And if you have a chance to see her live (as I did a couple months ago at Baltimore's Zodiac), dear God take it. Her live shows are astoundingly good.

There's something funny about "Telephones," the opening track on Headlights' third album, Wildlife. As the first couple of minutes play out, there's nothing really noticeably different from "Get Your Head Around It," the first song on last year's Some Racing, Some Stopping. Both are slow-building, mid-tempo rather run-of-the-mill indie pop songs a la Page France, Rilo Kiley, Death Cab for Cutie, Earlimart and on and on. But whereas "Get Your Head Around It" is all dancy full-band-ness (with vocal harmonies and, yes, glockenspiel) by minute three, "Telephones" takes a different turn. When Tristan Wraight's distorted guitar solo comes in around 2:45, all cranked out and flailing, you know Wildlife is going to be a different kind of Headlights album.

Though different turns out not to be more rockin, but slower, sadder, more reflective, at least on the second half of the album (from "Dead Ends" on through to the album closer, "Slow Down Town"). As Wraight said of Wildlife, "For the first time this is a significantly personal record for us, and for very real reasons like growing up and people dying that you love." That certainly explains downers like "Wisconsin Beaches" and "Teenage Wonder," songs about detachment and heartbreak, about missed opportunities, about never knowing quite what to say: "Nobody's got your back —not even your friends / They can't, they're too busy growing old," sings Erin Fein on "Dead Ends," and that kind of 20-something, feeling-sorry-for-myself sentiment hangs around throughout.

If Wildlife is Headlights' best album yet—more dynamic, and with more depth, than any of their previous releases, it still suffers from some of the same old problems: the album doesn't feel right as a whole, too many songs are off-balance with each other; Erin Fein's vocals are still pretty to the point of boring and she does entirely too much of the singing here (though some of the best vocals on Wildlife are Fein's harmonies with Wraight on "We're All Animals"); and there are still the lyrical doozies. Not bad lyrics per se, just bland, anybody's-guess-who-wrote-this sort of lyrics—again mostly Fein's doing (all of "Secrets," for example.) If Wraight would finally take the helm, God only knows what kind of breakthrough album they'd come out with.