The dirge folk of James Sarsgard. 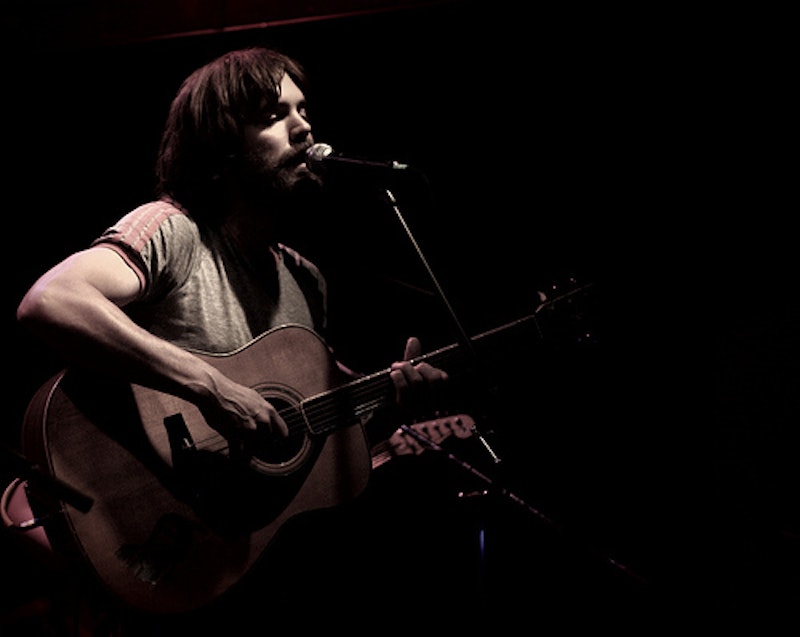 It's been a few years since Baltimorean James Sarsgard's dirge folk band Noble Lake put out it's five-song debut EP, a mostly rough acoustic affair (guitar, banjo and violin dominate) featuring some of Noble Lake's best known songs in their earliest versions. Early in 2008, that EP was expanded into a more proper full album release, Heyday, an album that found Noble Lake considerably less lo-fi, thanks in large part to backing by Wye Oak's Jenn Wasner and Andy Stack. Sarsgard's songs tend to be odes to hopeless drifters, to the wrecked and brokenhearted, and on the band's second LP (tentatively scheduled for release in the spring of 2010) the sound drifts from reverb-heavy slowcore to more straightforward alt-country. I recently talked to Sarsgard via email.

SPLICE TODAY: Can you tell us a little bit about how Noble Lake got started? I know for a long time Jenn and Andy (Wye Oak) were your main backing musicians, but did it start out as a solo-project?

JAMES SARSGARD: Noble Lake got started in the winter of 2005. At the time my other band, Long Live Death, was folding, and I had just recorded an EP in Winston-Salem, NC, at the Werehouse. I had done a couple solo shows under the Noble Lake moniker at that point, and I was looking for a new project, so I got together with Andy and Jenn and EJ Shaul-Thompson, and we played our first show in March 2006. Shortly thereafter EJ left the band, and we started playing shows as a trio.

ST: When did Justin get involved? He's become sort of the little-bit-of-everything guy.

JS: I think it was early 2008 when we started playing with Justin. I've known him for a long time now, and it just seemed natural to get him involved. He's played in other local bands before, primarily as a "texture" guy, playing unusual instruments, and at the time it suited us pretty well. Then, with Wye Oak touring more and me living in Brooklyn for a spell, it was just me and Justin doing shows together for a bit. At one point he was playing a different instrument on almost every song. Nowadays he plays the lap steel mostly, with some melodica thrown in here and there.

ST: Where did you get your start? Are you Baltimore born and raised or did you move here at some point?

JS: I was born and raised in Northeast Baltimore. I'm a lifer. I've seen this city change a lot, both culturally and musically. It's still a good place to live and make art and music, although it's not that cheap anymore. In the 90s, I lived with a bunch of friends in a crazy brownstone mansion in West Baltimore, a few blocks from where The Wire is based, for next to nothing. I worked at a liquor store. It was some wild times. I guess it was around then that I started playing music, or at least writing songs. For a while I wanted to be an actor. But after a small stint in college and local theater, I decided music was a more direct path of expression for me. Although lately I've wanted to act again, and Baltimore seems to be having a little DIY theater movement going lately, so who knows?

ST: Have you ever played in anyone else's band or have you always been doing your own thing?

JS: I never really played in bands till my early 20s. I guess the first real band I was in that ever toured or anything was Long Live Death, kind of a huge tribal/goth/psych freak out band I was in for around five years. Then I played with some folks from that band with a collaborative folk/songwriting project called Paper Canoe, and Noble Lake kinda rose out of that experience.

ST: You've recently enlisted Walker and Steve, how's the new line-up been working out? Do they play on the new album or are they just there for live shows?

JS: So far we've only played one show together, which was me, Justin, Walker, Steve and Stephan Condouris, who's been playing drums for a while with us. But I want to include them in more shows. It's kind of hard to predict the future, as Andy and Jenn are very busy with Wye Oak, Walker is doing a lot with Celebration and other projects, and Steve with Arboutetum and his solo work. But they're all talented, flexible musicians, and I'm happy to play with any of them when they have the time. I kind of look at Noble Lake as a band with a lot of moving parts; you might see a Noble Lake show that's just me, or just me and Walker, or me and a big band. To me that's one of the main advantages to the country/folk genre, you can be a lot more flexible with the lineup.

ST: Was the process any different on this new album compared to Heyday? How long did it take to come together, before you were finally happy with the recording?

JS: It was a pretty different process. We did Heyday almost completely live, in one big room, with very few takes, in one weekend. With Parting Bead we multi-tracked most elements, spent about a week recording it, and then spread out the mixing process over a couple months. It gave us a lot more time to tweak it and get things just how we wanted. Andy and Jenn wore a lot of different hats, from drummer to guitarist to mixing and in some ways producing the record at times. Stephan C and Justin contributed their roles, and Chris Freeland and Mickey F were really helpful as engineers! The end result, I think, is a record that sounds a bit more polished than the last one but also more stylistically diverse. There are some songs that are just me with a guitar, some that are almost straight country rock, and some that resemble some of the older, darker, dirge material.

ST: Who have your primary influences been, both in terms of songwriting and how you want the full band to sound?

JS: I guess one of my earliest inspirations was Tom Waits. He's a great storyteller, which I'm pretty big on, but there's such a huge emphasis on mood and texture as well. Hearing him as a kid made me realize I could play music, it just seemed real organic to me.

Songwriters? Man there's too damn many. I guess Townes, Leonard Cohen and Dylan. Shane McGowan was a big early influence as well. Stylistically I tend to swing from really feeling the whole vein of American folk and country and all that it has to offer musically, and the richer, more antiquated styles of British folk, from Shirley Collins to Richard Thompson. Of course, you can never count out good old-fashioned punk rock. Sometimes I just wish Noble Lake sounded like the Minutemen!

ST: What's next for you?

JS: Right now, just trying to get this record out. I'm looking for a label, and I hope for a spring 2010 release. I'm planning a tour this March and after that, we'll see. But it's been a crazy decade and I'm looking forward to a fresh start to the next one.