Rye Rye's New Album Keeps It Real on the Radio 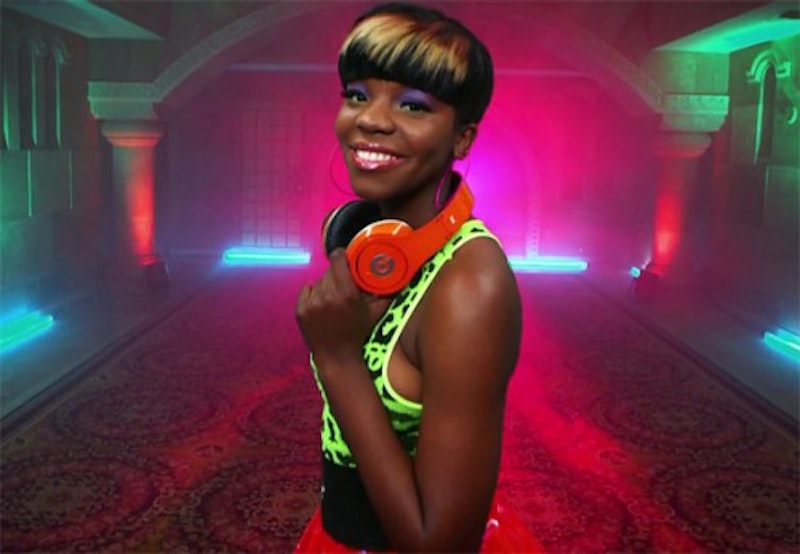 To listen to Go! Pop! Bang! is to re-listen to Go! Pop! Bang! It's not just that the album has the compulsive hookiness of successful pop, so that you both can't get it out of your head and want to play it over and over again so that you can't get it out of your head so that you want to play it over and over again.  It's also that Rye Rye's particular hookiness is based, like her name, on restatement. The doubled title of "Holla Holla" only hints at the track's numb, head-nodding repetition. From the opening where some processed vocal declares "Get, get ready," over and over to the rising tone sequence that you hear over and over and over to the "Holla, Holla" chorus, the song weds the atavistic reiteration of a drum circle to the futuristic reiteration of electronica to create a kind of endless, ever-returning, achronological present. As with Chicago juke (http://www.splicetoday.com/music/hypno-beats), to which Rye Rye's music bears more than a passing resemble, the overall effect is alienating enough that it's hard to believe that this is what the kids are listening to these days.

Admittedly, Rye Rye is a lot more accessible than juke. The guy shouting "Get, get ready" goes on for a bit, but not for a whole song… when he reappears in the middle muttering the same phrase, it works as a kind of bridge, a repetitive break from the other repetition. Nor is there anything particularly outré about Rye Rye's rhymes; "I'm too cool for my own shit/Swag's outrageous/My style's retarded/And so contagious," seems like fairly standard dance floor fodder. Indeed, as titles like "Dance," "Shake Twist Drop," "Shake It To the Ground," and "Rock Off Shake Off" indicate, Rye Rye's lyrical interests are as repetitive as her music, and considerably less distinctive.

The bulk of Rye Rye's album involves her navigating between the frenetic avant-garde intensity of her bang, and the more commercial realms of pop. The latter wins out decisively on "Crazy Bitch," which is dominated by the two-legged blight still, alas, known as Akon. Somewhere out there there's probably an artist with enough personality to offset his sodden whiny misogynist drivel, but that artist is not Rye Rye. Despite the title, the track doesn't sound crazy or bitchy; it just sounds like every other damn thing on the top 40.

It would be easy to argue that Rye Rye is best when she's most raw. You could certainly make the case by pointing to the deluxe bonus track "Hardcore Girls" which is four minutes of blown out frenetic electrobeats with Rye Rye spitting lyrics with enough manic intensity that they turn into pure sound—who cares what she's saying when she says it with like that? But then, on the other hand, there's the single "Sunshine," an M.I.A. collaboration released in 2010. With harmonized "dum-dum-dums" cooing in the background, Rye Rye manages not just boom but swing as the song rocks seamlessly from hip hop to girl group and back again. The R3hab remix of "Never Will Be Mine" isn't as fully realized, but has its own charms as Rye Rye's adrenalin rush trades death blows with Robyn's straight-up Euro emoting. The result is schizophrenic, but not unpleasant.

I don't think it's fair to say that Rye Rye's pop moments sell out her true repetitive dancebeat soul. After all, if Robert Johnson was willing to play the odd Bing Crosby hit, there's no reason that Rye Rye shouldn't collaborate with Robyn. On the contrary, one of the things that's happened as hip-hop has gone mainstream is that pop has become real and vice versa. I'm sure Akon's as popular on the streets of Baltimore as is crazed Philip Glassesque dance music, which neither validates Akon (who still sucks) nor invalidates Baltimore club music. It does mean, though, that there's a decent chance that Rye Rye can have a long career while continuing to make some pretty weird music. I'm keeping my fingers crossed, anyway.