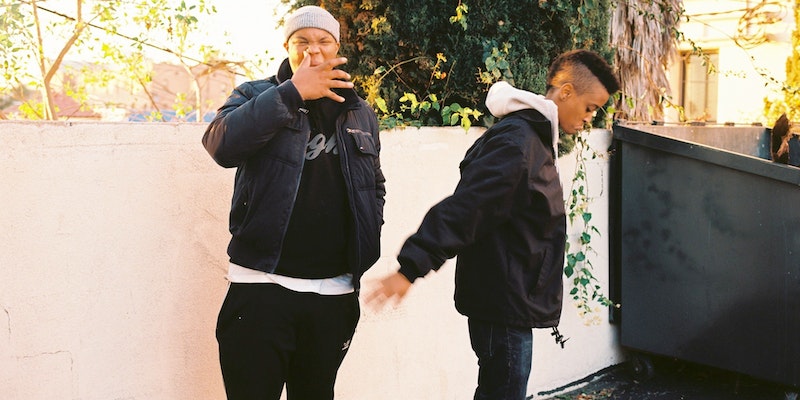 If Earl Sweatshirt is Odd Future's Claude Monet, The Internet is the L.A. culture insurrectionists-turned-rap status quo crew's National Public Radio: a font of pure, unadulterated chillax, warm purples and tweeds, a sort of modulated pop tranquilizer that suggests downtown murals quietly and alluringly coming to vibrant life. Songs like "They Say" are life-affirming and soothing in the way that Tyler, the Creator bangers can come across as poisonous or anarchistic; producer/singer Syd Tha Kid and producer Matt Martians should probably really re-dub themselves The Intranet.

If 2011 debut Purple Naked Ladies established a credible baseline that synthesized everything from Soulquarian drift to Sade to Digible Planets while throwing Syd Tha Kid's luminous vocals under a spotlight, Feel Good expands the duo's range and adds a tanker truck of codeine-based syrup to its sound. (I'm even hearing a bit of Corinne Bailey Rae in there.) This is an album that strings itself out for weeks, in the way that a really immersive drone magnum opus might; this is an album that might inspire frequent use of "song suites" in a favorable meaning of the phrase. Ladies' whorled bumptiousness has given way to a sensual sinuousness that finds room for stretches of dub, bossa nova, imitation Stereolab, and Deee-Lite's dippy club chic.

Take the pre-set, wedding-reception rapture "You Don't Even Know," where a radiant Syd and the preternaturally smooth Tay Walker ply devotionals over a gently percolating patina of finger snaps, string effects, and swelling synthesizer chords; bordering on gospel, this love jam will have you penning vows to your hi-fi. "Cloud Of Our Own" bisects into two equally trippy halves: a signal-juggling MC Escher paean to a girl who might be the wrong match for our heroine, and a jam that suggests a group of old-school DJs under the influence of some high-grade, medicinal smoke. The spare, boho "Red Balloon" rises under the steam of whispering bongos and winding acoustic guitar; "Dont'cha," the record's lone, quasi-aggro concession to funk, wouldn't sound out of place in a Prince set, albeit with randier guitars.

The back end of Feel Good is where things get weirder; there's more blunted meandering and way less Syd vocalese, there's the slow-motion head-knock of "Matt's Apartment," an impaired Mac Miller stumbling through fields of fusion-jazz love on "Wanders Of The Mind," and whatever the fuck the 10-minute long hall-of-curved-mirrors "Higher Times" aspires to be. If its first half is a celebration of romantic pleasures, the second half loses the plot in an opium daydream, hovering nowhere fast and suggesting that one spine-tingling extreme is no more sacred than the other. Then again, you could opt to stay in, not text your dealer, and spin Feel Good on repeat, instead. Hey: relax.