A night full of equipment failures and self-flagellation. 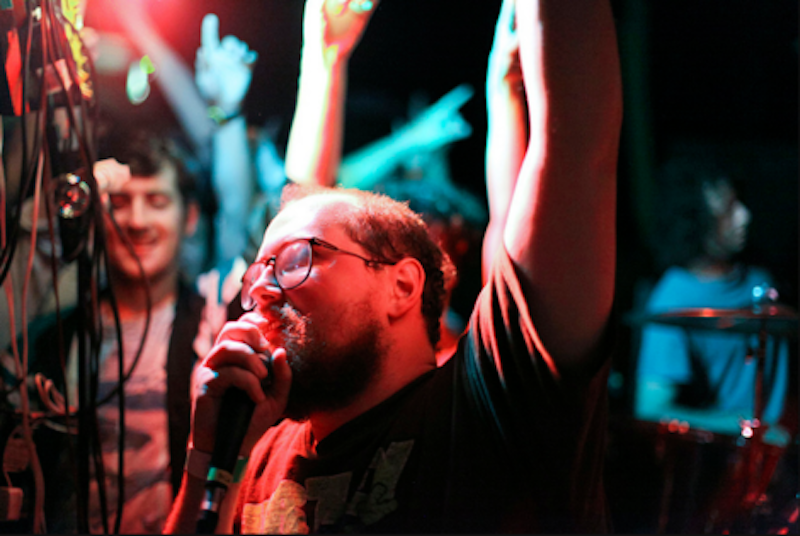 “Well, at least this show is exactly like one I’d play in 2004, when everything was constantly breaking and I wanted to kill myself—let’s just do this.” Dan Deacon was channeling Rodney Dangerfield Oct. 4 at Baltimore’s Crown, with a capacity crowd (100) to see him play a set of entirely new material, even excluding new songs that have already debuted like “Goldlord” and “2008.” He’s getting heckled, in good nature, but like a cartoon character, by some familiar faces. Deacon promptly roasted and implored two frequently rowdy people who wouldn’t go 10 seconds without shouting or doing something to get attention, to not bug him during the set. His center speakers—beat up JBL’s with only a few fluorescent slivers of tape steamed on—cut out and then failed completely, but no one cared, or even noticed. Dozens of overdubs and layers were missing, but the meat of these new songs rang true. Malfunctioning equipment and blown speakers are usually part of the show, but there’s always someone glad to help move the entire PA 10 feet to the left of the stage in the middle of a song, or cheer him on when his dialogue goes morbid.

Deacon’s new songs are busy, long, and more manic and gleefully insane than the symphonic and solemn songs on America, especially the “USA” suite. Last Thursday’s ripe material took cues and specific sounds and moves from his four LP’s. It’s hard to tell how much of his self-whipping is schtick and genuine frustration. “I feel like I’m in Columbus,” he said, even as the room parted in two. The songs played were all at least seven minutes long, referencing most of his past work (mallet rhythms and tones from Bromst, helium oscillator melodies of his earliest records, and the thick as concrete composition of America). Deacon has spent nearly 10 years on the road, basically non-stop, going from Greyhounds to huge festivals and crowds of thousands around the world. Everyone that does this eventually goes a little nutty. The songs were more varied, sarcastic, cynical, celebratory, and sexual. It was a great reception for new material that seemed especially rough and haphazard, most of which might never be heard again.

It’s impossible to tell what Deacon’s next proper full-length will sound like. Four years ago, way before America, he played exactly the same kind of set, debuting an early solo demo of “USA” that had these monolithic, droning chordal walls of sound instead of the record’s strings. It was chemical when the song exploded into its sprinting and spitting verse, like a great wave of physical sound gliding through the desert. The show was way over capacity and the amoeba happened, a mass of people glued together intent on saving their spot or getting closer to the front. The reaction to that rough take of the “USA” suite was the most powerful live music experience I’ve ever had. Immediately you were thinking of what he’s up to next, but the other two songs played that night—“Ramp Rock/Fergle” and “Konono Ripoff No. 1”—didn’t make the record, which came out nearly three years later. I’m not alone in wanting to hear his scratch work sooner rather than later.