Luke the Drifter to Hank III. 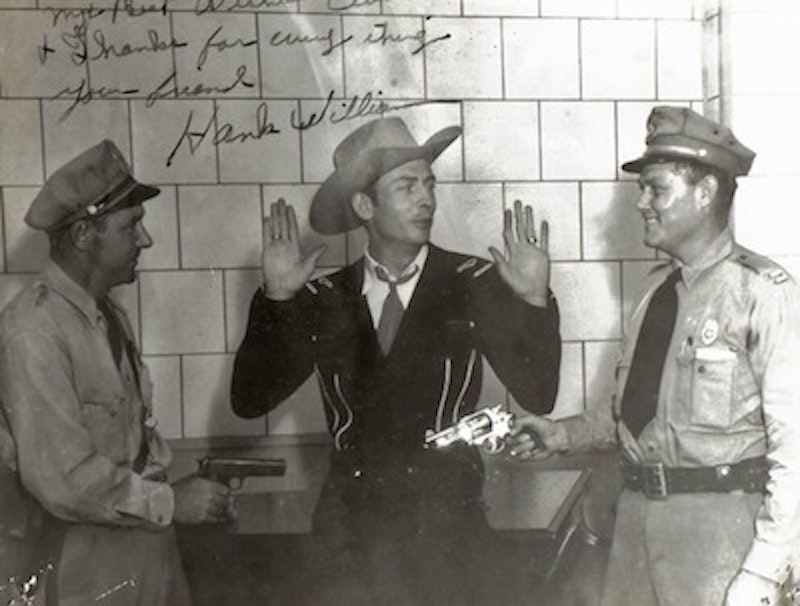 Hank Williams started when country music began to intersect at the crossroads with black blues. He made it everyman blues giving it recognition where there was none before. Without ruffling the feathers of aficionados, or black and white racists on both sides of this story, there're two favorite kinds of music in the original realm of Williams schooling, the old saying, "I like two kinds of music, country & western."

Ray Charles said “Country music’s got soul.” Only a racist would deny any kind of music based on race. The blues played a major role in Williams’ musical upbringing, the melding of disparate genres. The giant nutshell that molds modern American music, including rock ‘n’ roll, that also borrowed heavily on the blues. The essence of different cultures mixing rhythms together to form a new sound that’s pleasing to ears of all colors around the globe.

Rufus “Tee Tot” Payne was a black blues man born in 1883 on a plantation in Alabama. Tee Tot got his nickname for always having a jar of corn liquor and tea combo with him when he played the blues. The opposite on the teetotaler. Hank Williams was only eight years old when Tee Tot taught him the ropes on guitar. He showed him fundamental blues chords that would inevitably lead him to play his own brand of music. Williams nurtured a unique style fusing blues, hillbilly, bluegrass, Appalachia folk, gospel, western swing, and rockabilly, forging a sound that was all his own. He always gave credit to Tee Tot for his childhood music lessons.

By the time Williams was 14, he was busking on the streets of Montgomery, Alabama for spare change. He was discovered by local radio station WSFA. As the yarn goes, he was given a 15-minute radio slot to perform his songs and popular covers of the day. He formed his band The Drifting Cowboys. He quit school, while his mother managed the band and his new career. Tee Tot, Roy Acuff and Ernest Tubb were the major mentors who inspired Hank, the rest are the bones of musical emotion and the bittersweet heart/soul of all who’ve ever heard him sing and play his songs or played his records. He also used the pseudonym of Luke the Drifter to record and perform talking blues sermons of moral turpitude and saving grace that the bars and radio stations didn’t like to play because they were preachy. They weren’t conducive to sitting in a bar all day drinking or dancing the night away in some roadside honky tonk. He understood the ways of broken hearts and saw the light in the down and out of societies downtrodden outcasts.

Williams died on New Year’s Day 1953 at 29. On the way to a show his sad heart stopped beating in the back of a black stretch Cadillac. It was stated by the coroner that pills and booze were to blame for his untimely departure. I like to believe he died of a broken heart. Not from romantic love lost but heartless love forgiven to a cold hapless world. The legacy he left lives on in musicians, singers, songwriters and fans from all music tastes. The people who followed after Williams credit him most for his inspiration and many contributions.

Those people are as diverse as The Rolling Stones, Dylan, Elvis, Waylon Jennings, Willie Nelson, Johnny Cash, Merle Haggard, David Allan Coe and honkytonk hero George Jones. They’re just a handful of the faithful followers. I recorded "Your Cheatin' Heart" live at CBGB's in 1978 with Da Moronics. I like to mention this fact every time I can because even as punkers we were also inspired by Williams. That's how far Williams’ songs travel still to this day. Skirting the edge and back. That's a homage to the man who helped promote country music into the modern musical psyche located deep in a hillbilly dream way down south to the Americana tradition.

Hank Williams Jr. is a can of worms I’m hesitant to open. Some say he’s the king of the southern outlaw rebels, while simultaneously also an arch-conservative. A living contradiction of his father’s legacy. Taking the redneck, beer-drinking hell raiser to new heights as a Confederate sympathizer and homophobe. He hugs the American flag and waves the rebel stars and bars. The good ol’ boy selling Monday Night Football. After talking smack on The Sean Hannity show in 2011, he was kicked off his gig as the intro act to the Monday night NFL franchise. When he screamed “Are you ready for some football,” it was time to crack open a beer, get in your favorite recliner chair, and chomp down on some wings and nachos in the mancave. Now that racism is back in our faces again he’s back on Monday Night Football.

Here’s Hank Jr. hanging out with Kid Rock. There he is, the big dog barking about politics, god and Trump. He’s like the Ted Nugent of white-trash redneck double-wide pick-up trucker fantasies where all your rowdy friends in low places are welcome to get high, raise hell and shoot some guns. Hank Jr. was groomed to follow in his daddy’s footsteps but got lost somewhere along the way. Maybe too many days on the golf course. Maybe falling from that Montana mountain side he was climbing in 1975 scrambled his brains. He’s a champion of the blue-collar hardworking class stiffs, but I‘ll go out on a limb and say he never worked a hard day in his life. The whiskey and cocaine of endless outlaw nights hanging out with rebel sycophants and psychotic wannabe players down in Nashville. Hank Sr. named him Bocephus after a popular ventriloquists dummy in the early-1950s. He never wanted to imitate his famous father.

The lost highway leads to Hank Williams III. The son of Hank Jr., which won’t be held against him, but more importantly he’s the grandson of Hank Williams. Two out of three ain’t bad. He has some mighty big boots to fill but wears them well. It’s fair to say he’s the living proof of the talent that was handed down from the spirit of his grandpa. Williams III is the real deal. His persona isn’t of a rich Hollywood hillbilly poseur in a 10-gallon hat, expensive cowboy boots, draped in gold chains and fat rings smoking a $100 cigar. He’s humble and old school country. As he so eloquently stated, “Put the dick back in Dixie and the cunt back in country.” He’s rallied against the Nashville hit machine of pop music stars getting rich off the pabulum of computer-generated melodies and lyrical formulas 101 for dummies.

Almost 20 years ago I had the pleasure of meeting Hank III and he was easy to talk with and genuinely interested in what folks had to say. His was touring around in an old bus promoting his debut album Risin’ Outlaw, and upcoming Lovesick, Broke and Driftin’ making all the whistle stops up the east coast. He landed in Baltimore, booked one night only in a long-gone Fells Point club. I had my latest cassette demo with me and was determined to give him one. The bus door was open, and I asked if Hank was around. They laughed and said, ”He’s always around, who the hell are you?” Not sure what to say, I replied, “ I’m a friend of Hasil Adkins and I want to give him a demo tape of my new songs.” A guy came back to the bus door and hollered, “Hank says any friend of Hasil is a friend of his, come on in.” When I boarded the bus I was greeted by a 6’4” spitting image of Hank Williams. It was incredible. He shook my hand and asked after Hasil. We talked music for a bit, I handed him my tape, had a shot with him and we parted ways vowing to keep in touch. I saw him a few times after that but time slowly evaporates, things change.

Country legend Minnie Pearl was quoted when meeting the young Hank III, “Lord honey, you’re a ghost.” She saw Hank Williams. Beyond the obvious physical similarities, Hank III sounds like his grandfather. He doesn’t have to try to imitate, it’s a natural gift handed down from his bloodline. TheHee Hawgang was slowly fading away. The old south was under attack again. The Civil War never ends. The anti-fascists are just as fascist as the regular everyday fascists. Hate is bred and nurtured by haters. We didn’t create this mess we live in. Hank III has made the best he can out of the ancestry he carries with him. He has no time for trivial politics and petty evangelists. From punk rock beginnings till the next big party his music makes no apologies. Waylon Jennings said he always felt the blues, rock ‘n’ roll and country are just about a beat apart. It’s always been three chords and the truth. Hank III is pure honest sincerity with the true soul of his grandfather’s legacy intact.