The Celestial Septet Descends On Baltimore 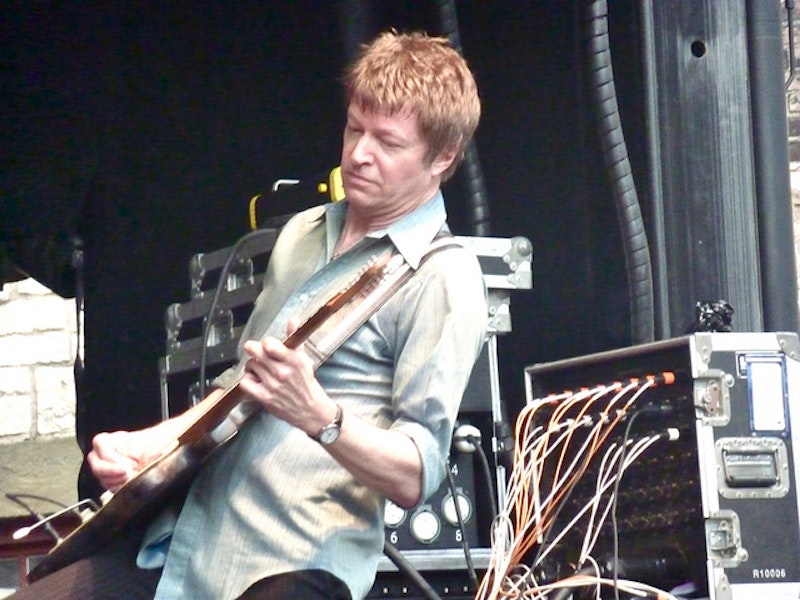 California guitar god Nels Cline is a busy, restless soul—in 2010 he released four albums, one of them a double disc, each with a different set of collaborators, all largely comprised of instrumental music written or co-written by Cline. But the 55-year-old jazz and underground rock veteran's live dates tend to center around his native west coast, when he's not touring with his most high-profile band, Wilco, which he joined in 2004. So his visits out east, particularly dates outside of New York, have been few and far between; in the past decade, Cline has only played Baltimore a handful of times, mostly as a backing player for Carla Bozulich or Gregg Bendian's Interzone, and a few other times in nearby Washington, D.C., including a date last summer with the Nels Cline Singers, his primary creative vehicle since 2001.

So it was a surprising and exciting coup both for the Windup Space and the whole city of Baltimore that the Station North venue got to host one of just a handful of east coast shows Cline played recently with The Celestial Septet, the combination of both the Nels Cline Singers and the ROVA Saxophone Quartet. The Singers and the San Francisco-based ROVA released their collaborative album on New World Records nearly a year earlier, so it felt like a rare treat to see the two bands unite so far from their native California.

Throughout their two hours of music on Sunday night, the seven musicians crammed up on the Windup's small stage felt like one cohesive unit at some moments, but just as often as two distinctly different bands diligently working to fuse together. The four ROVA saxophonists, Jon Raskin, Larry Ochs, Andrew Voigt and Bruce Ackley, formed a front line on the stage, each with a music stand and sheet music in front of them. With the trio behind them, only the towering Cline was a constantly visible presence, with drummer Scott Amendola and bassist Trevor Dunn, who recently replaced founding Singers bassist Devin Hoff, easier heard than seen. Sometimes the disconnect between the two bands and their respective ways of doing things was palpable; ROVA would often signal to each other with simple hand gestures, while there were a couple points when Cline and Amendola would attempt to land on a big note together and fall out of sync.

For the most part, though, the Celestial Septet was a formidable force, with the ROVA saxophonists darting notes and each other or suddenly coming together with a thick wave of harmony, while Cline's guitar cut through it all with squirrely clusters of sound and effects pedal-assisted electronic textures that were all the more conspicuous and strangely beautiful in this particular context. During "Whose To Know," Amendola and Dunn each took lengthy, jaw-dropping solos to affirm their status as more than merely the rhythm section.

The ensemble had a clever trick up their sleeve to end the evening on a high note with the final composition, "The Buried Quilt." A few minutes into the piece, the ROVA players left the stage and allowed Cline's trio to play unaccompanied. Then, as they stood among the crowd, they began suddenly playing soprano saxophones in a kind of call-and-response with Cline, walking through the audience and then finally ending up back onstage.  And that little moment of theatrical novelty was the perfect cherry on top of an evening that was otherwise all about musicianship and avant garde composition in its purest form.