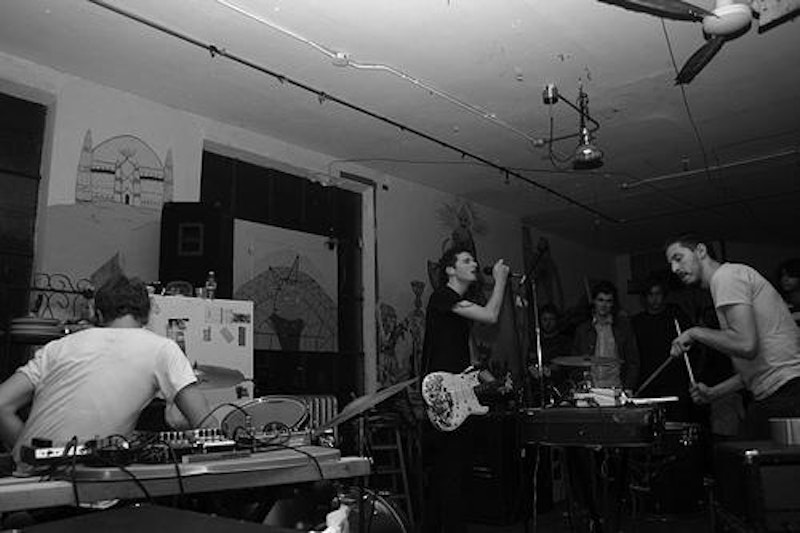 Downloading and perusing at leisure the four free-for-download White Suns songs available on the Brooklyn band’s last.fm page reveals a trio committed, almost to a fault, to a chosen aesthetic. White Suns songs do not just happen; they do not insinuate themselves into your consciousness, they do not gather speed, they do not grow moss. White Suns songs are the SWAT team bursting through the front door with riot gear, a battering ram, and no courtesy knock; the sickening slide on interstate black ice that seems eternal but concludes with a swift crunch; the low-hanging lamp you blank on, smash, and slash your ear open on while rising, too quickly, from a low crouch.

A stream of late-aughts singles, splits, and cassettes gradually established White Suns’ no-quarter-given-M.O. Listeners were made to understand that Sightings’ industrial-noise Napalm-scum, Shellac’s taut, blistering primitivism, and Bleeding Kansas’s concussive hardcore could co-exist and share hummus under a single leaky roof. Atonal, coruscating, and pointed, songs like “Exposable Income” and “Growth” seethe, thump, and clang with an eclipsing, bottled-up rage. Kevin Barry (guitars/vocals), Rick Visser (guitars/electronics), and Dana Matthiessen (drummer/electronics) were definitely onto something—something viscerally athletic, in the sense that tuning into their pique could make a tiny home office feel like a tiny punk club engulfed by an out-of-control mosh pit—but could they channel their fury into a solid full-length recording?

The answer, it turns out, is a slashed-larynx “fuck yes.” Waking In The Reservoir (UgEXPLODE), their long-awaited debut, works from the dubious assumption that everything preceding it was “too accessible” or “too conventional.” (Hear live versions of some Reservoir tracks here.) This equates, at first exposure, as “too much” – too punishing, too blunt, too enamored of its own anti-music cat-swing—but that sense of utter and complete fist-to-nose excess gives way as the listener’s comfort level adjusts. At once bleaker and more given to frenzy, White Suns’ prime-time dissatisfaction proves a jagged thrill. Opener “First Purge” is all-out, full-tilt war, a perpetually ejaculating crescendo of AK-47 clip drumbeats, distended, blistering chordage, and a blood-curdling Barry bon mots. On “Harvest,” they opt for a compartmentalized down-slope skid—drum kit samurai chopping here, splintered-shrapnel electronics enriching ER wards there, Grand Mal epileptic guitar anti-heroics over there—while listening to “Voyeur” is like wrestling with an electrified avalanche of satellite scrap metal. As Reservoir winds down, White Suns shift into a relatively contemplative gear with the starchy title track. “Waking In The Reservoir” wrenches idly through various cycles of Emergency Broadcast System test drone, nails-on-a-chalkboard wheedle-screech, and balloon-effects dissonance, suggesting that there’s more to these Suns than meets the bloodshot eye.