The Bog Comes Down

A Mars Volta fan is disillusioned as he’s forced to suffer the band’s success. Why are meatheads allowed to ruin a concert? 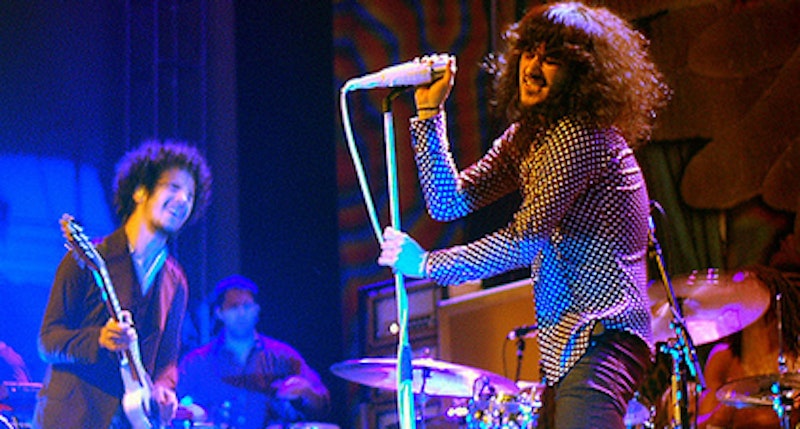 When did I lose it? When did I know the night would be a descent into the beer-stained depths of urban blight? At what point did the experience, which I’d expected would be a pleasurable night out, become a tedious slog through sweaty bodies and obnoxious loudmouths? Shouldn't I have seen something like this coming? How could I have been so stupid?

I was pretty excited when The Mars Volta announced a Baltimore date on their recent tour, although probably not as much as I should've been considering what they once meant to me. In 2005, I was obsessed with both The Mars Volta and the band that preceded them, At the Drive-In. I consumed hours of bootlegs (audio and visual), scanned hundreds of concert photos, and snatched up whatever new recording they had out at the time. Frances the Mute was especially inspiring. The music was a revelation, for this was the first time I was exposed to elements of ambient music, salsa and Latin themes, and long, long, long jazz-inspired improvisational sections that seemed to go by in seconds. I was thrilled and I wanted more.

Luckily, at the height of my mania, the band stopped in Baltimore that summer on their tour with the odious System of a Down. Although the band was limited to an opening slot, they played for about 45 minutes—four songs—and I was satisfied. The set was mostly material from Frances, and to see the multiple climaxes and flourishes of "Cygnus...Vismund Cygnus" was a thrill. I left Baltimore’s 1st Mariner Arena feeling euphoric; in my mind, it was a perfect performance.

By the time their most recent show came to town in January, things had changed. Mostly, I had grown out of The Mars Volta and started listening to a wider range of music. They were no longer my favorite band and I hadn't listened to them in months, but I knew that their live show would deliver.

The night of January 18, 2008 quickly approached, and I was enthusiastic about finally seeing the band play a headlining a show (with the bonus of no opening acts). Unfortunately, none of my friends showed interest, even after my incessant prodding and promotion. This was the first sign that I was in for a lonely night.

I arrived at the venue with cash and ticket in-hand, and the bands songs in my head. I was the model fan. But the complex was filled with more drunk, loud, and creepy meatheads than I had ever seen gathered in one place.

I bumped into a friend who happened to be going to the concert. Now I at least had someone to pass the time with and alleviate the coming boredom. Marc and I talked outside for a few minutes, mostly about the band, while the serpentine line leading into Rams Head spilled out onto the street. Soon the doors opened, and the rush was immediate and thankfully brief. There was the touchy-feely and overtly sexual couple in front of us (both oddly wearing eyeliner), the group of high school scenesters behind us who all looked like they stopped growing before seventh grade, and the out of place fortysomethings in the will call line who stuck out like refugees from a Fleetwood Mac nostalgia convention. And of course, the meatheads. The chill brahs. The LAXers.

As I was stamped and ushered into the actual venue, I realized to my dismay that most of the pit was already filled, and I wouldn’t be able to get to the front without some careful maneuvering. I squeezed and squeezed, bumping into people, probably pissing them off before the show even begun. I finally settled in an okay spot near the front and leaning to the left. In front of me were two rows of people, a number of whom seemed to be with each other. There was one guy up front with unkempt but obviously maintained facial hair and black thick-rimmed glasses who was standing with his back facing the stage, a minister speaking to his congregation of five people.

The moment I heard him talk, I was enraptured. His voice was easily heard over the dull roar of the crowd, and clearly the people standing in a circle around him were as captivated as me. He jumped from one topic to another, never missing a beat. At one point, someone in this group of disciples asked about his shirt. He said it was an Eagles of Death Metal shirt, and then went on to relate the story of how this band came to be named. But his most fascinating anecdote of the night was also his longest and most elaborate. Somehow, he got on the topic of travel and waxed nostalgic about a trip to Scotland many years ago. He talked about a treacherous hiking trip he took while there. He said the most dangerous part of the hike were the bogs.

As his hike went higher and higher and became more and more isolated, he said he was still oblivious to the abundance of these bogs in the area. He accidentally stepped with one foot into a bog, and it gave. Fortunately, it was only one of his feet, and he quickly recovered and started to watch out for these deceptive wetlands. He went on to say that had he fallen into the bog, he likely would've drowned, with no one around to save him. Alone in the Scottish mountains, lost in a bog, perfectly preserved for thousands of years. I wondered if the very crowd that night wasn’t all that dissimilar to the bogs. You stand still for the rest of time, waiting for something that's not going to come any time soon.

Right before the show began, the smell of pot permeated the room. Not long after, two Duane Allman impersonators were roughly escorted out of the venue. Two fans behind me, giddy with excitement, projected set list possibilities and stories about The Beatles. They reminded me of myself, just two and a half years ago, waiting patiently in 1st Mariner Arena, wondering how amazing the night would be. Innocents, they hadn’t yet been jaded by outlandish ticket prices or unruly pseudo-fans. They were the model fans: respectful of others, happy to buy merchandise, and genuinely excited to the see the band. That's more than I could say for myself and most of the crowd that night.

The Mars Volta finally came on a few minutes past 9:30, and they launched into a crowd favorite, De-Loused in the Comatorium's "Roulette Dares (the Haunt of)." What started then wasn't moshing, or even dancing; it was sardines pushing each other in waves. The crowd was so packed that there was no room to dance or move at all, and everybody just kind of ambled about as part of the human sardine crest. The band played well, but I could hardly hear it by then. In my battle to get closer to the stage, I accidentally aggravated a woman in front of me. “Dude, you fucking son of a bitch! Quit pushing me you fucking asshole!” That's all I heard before I turned away and backed off. A man with thick, greasy dreadlocks smiled at me as he made a circle within the bodies and danced like a maniac. From there, things got worse. I got pushed farther and farther back out of the pit, and eventually I just gave up, and retreated back to where Marc and his girlfriend were standing. I watched the band play three or four more songs from my new perch by the mixing station, and that's all I could take.

Two songs before the end of the set, I said goodbye to Marc and Chelsea, and stepped through alcohol-stained bodies into the florescent catacomb again. No one but a few stragglers and security guards remained. I walked down the corridor again, alone now, anxiously waiting to get home and go to bed.

Why was this night such a drag? How could I have left the band mid-set? Shouldn't I have been happy? This is the band I had been waiting to see live for more than two years, and by the time I got home I had no interest in ever seeing them again. Perhaps years of smaller shows where I knew most of the people had ruined big events like this. Because this wasn't a concert, it was a product. The actual music became so diluted by all the beer, t-shirts, and nacho cheese that it didn't seem like a real show anymore, but an elaborate advertisement for the Power Plant complex. Most of the people had little interest in the music, and were there only to socialize and drink overpriced beer.

The Mars Volta itself may have contributed to my diminished interest. Cedric and Omar's obnoxious and ungrateful public personas didn't help my dying fandom whatsoever, and the ideas explored on their most recent albums have been more absurd than novel. The band's hodgepodge style of progressive bombast and free-form jazz rock has attracted what may be the worst collective fan base in music history, running the gamut from John Belushi revivalists to astral projectors who spend their time eating mushrooms and trading Phish bootlegs.

This group of people, especially when combined in a hostile environment such as Rams Head, made for a curious and grueling night. Have I been spoiled by small shows that focus on music rather than money? Have I grown apathetic and cynical because of all the rigmarole required in attending a show of this size? Leaving Rams Head and the Power Plant, I realized this is the fate of all semi-popular bands: they will play venues like this simply out of necessity. This isn't a bad thing, and I'm happy to see a band I like succeed, but when everything around the music becomes more important than the music itself, what are we left with? A clean and shimmering imitation of a real experience, marred with pseudo-fans and a crushed sway of a dance. Having attended countless local shows in the past, I can tell you the feeling is more jubilant than frustrated. In a smaller atmosphere like Baltimore’s Floristree or the Hamilton Arts Collective, there is no third party to blur the lines between music and money. Shows at Ram's Head are bound to be like this, because the performance is not their main priority; it's to sell as much as possible, and bring more bands in so they can make a profit. A real performance is just that: a performance, not a multi-layered advertisement.

Is this the state of modern concerts for the mainstream? Do most people find this an entertaining way to spend an evening? Obviously some do, since the band sold out the 1500-seat venue in about a week. But the thought of a mesmerizing and hypnotic experience being muddied by shitty hot dogs and $10 bottled water disgusts me, and seeing it in person made me feel awful because I knew there was nothing I could do about it. Travelling home in the back of a cab, I couldn't help but feel like I was trapped in a bog, eternally frozen and sadly apathetic, waiting for someone to come and hear my dull cry. But that wasn't going to happen any time soon.