Toronto’s most recent exports forego the city’s typically big sound, and their debut is better off for it. 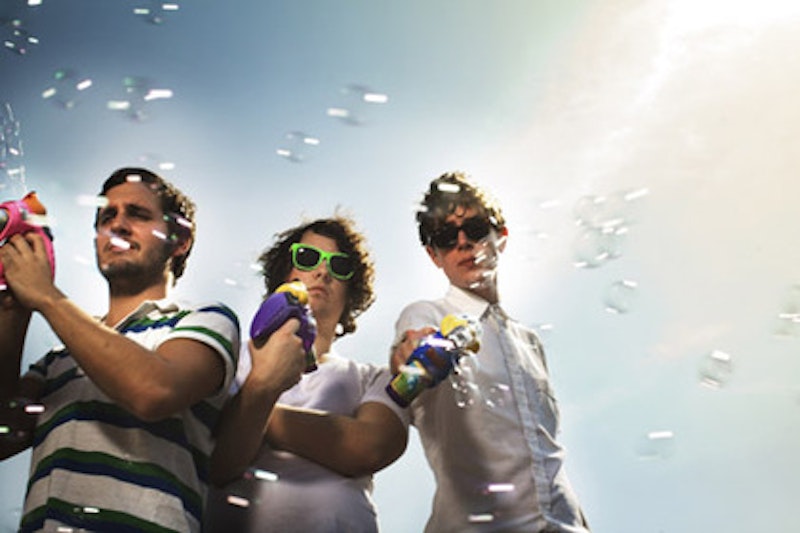 If nothing else, I give Born Ruffians credit for making me love a song with a name as dumb as “Badonkadonkey.” That’s the title of track six on their debut LP Red, Yellow and Blue, and like the record in general, the song appears juvenile or immature at first glance and then reveals itself to be surprisingly complex and catchy. With their nasally singer, thin guitar-bass-drums lineup, and lyrics about adolescent confusion, Born Ruffians could have very easily followed the template of track three, “Hummingbird,” and made a decent little pop-punk album. “Hummingbird” is a pretty great tune, in fact, one loaded with hooks and a sing-along bridge that takes us back into the last chorus. Lucky for anyone who’s listening, however, it’s also the most straightforward song on the album. Don’t be fooled by how familiar this music seems at first. Barely any song on Red, Yellow and Blue proceeds in the manner you expect.

Some standard influences pop up on occasion—early Talking Heads’ sense of rhythmic interplay; wailing harmonies reminiscent of Buzzcocks—but this group is entirely their own, mainly because the personalities of the three members shine through so effortlessly. Singer/guitarist Luke Lalonde can get a little abrasive in his higher register, but he’s written himself a set of melodies that could survive even the harshest caterwauling. He’s aided immensely by the harmonies and restless enthusiasm of bassist Mitch DeRosier and drummer Steve Hamelin.

Together, they play like three guys thinking with the same brain. Just when “Little Garcon” begins fading out, they bring in a new melodic section and then mix the two together before ending in an a cappella chant. They build the twisting intro of “Foxes Mate for Life” slowly before bursting the song wide open in the first verse. They even lock into a one-note bass line on the aforementioned “Badonkadonkey” and do a passable impression of an indie funk group. The closer, “Red Elephant,” is essentially two different rhythmic ideas for the verse and chorus, and the band wavers back and forth between them before settling on a more straightforward, melodic coda. It’s a stunning ending to a record full of twists and turns.

Animal Collective and Grizzly Bear collaborator Rusty Santos produced the album, which should have been my first tip-off that Born Ruffians are up to something a little weirder than their trebly geek-rock surface may indicate. The power trio lineup is always in place, but Santos and the band have packed this album with graceful flourishes—spots of reverb, panning harmonies, background piano and harmonium—that reward headphone listening. It’s all subtly done, however, and always with regard to the song at hand.

And those songs—some spastic, some relaxed, and not a wasted note among them—are ultimately what make this record so good. It’s been too long since a new album as superficially simple as Red, Yellow and Blue has moved me. But of course the music isn’t as simple as it sounds at first, and each song is arranged or performed in such a unique way that after a few listens I stopped thinking in terms of the music’s familiarity or immaturity. Instead, I just started telling people about a record I’d been listening to every day, beginning to end, for weeks.