THE BEST GAMEBOY PLAYER IN THE WORLD

An interview with Baltimore's Brian Blomerth. 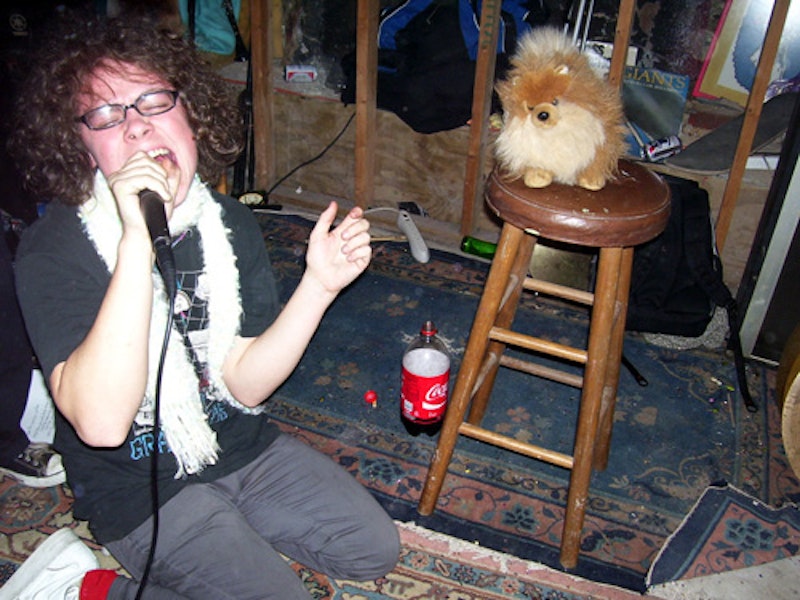 In a town full of artists, musicians and weirdos, there isn't anyone else like Baltimore’s Brian Blomerth. Since 2003, he's made art and performed comedy under his own name, and recorded music and toured across the country as Narwhalz (of Sound). Blomerth's eccentric sense of humor, illuminated by his brilliant Twitter page and through his performances, is compelling in its own right. Not to mention his fascination with the almighty Pomeranian—to him, these small, yappy dogs are a kind of muse, a physical manifestation of the equally yappy and petulant music he makes.

Any performance of Blomerth’s is mysterious in its own right—one is never sure what is part of the act and what is true pain. His set at Whartscape this year ended with him violently swinging a lightbulb around and smashing it on the tiny stage, sending glass flying into the audience, and then subsequently destroying his GameBoys, screaming "I LOVE BALTIMORE—IMMA FUCKIN' DIE IN THIS CITY" and "I'M NEVER FUCKIN' PLAYING AGAIN." I was sure it was all part of the performance—he referred to the set in this interview as "a pretty dark zone.” Part noise kid, part pulp artist, part frat bro, part manic-depressive and unfailingly hilarious, Blomerth is a fascinating artist. I caught up with him in an email interview last week.

Splice Today: When did you first start performing as Narwhalz? Were you in other projects/bands before Narwhalz?

Brian Blomerth: 2003—it's been a long ass time. Yeah, I was in a Christian hardcore band for a week. People say I talk about being in that band too much ... but those people have no idea how fucked up the Christian hardcore scene really is ... so yeah they can eat my shit. Triple XXX's on my face and hands, man it's been a fucked-up ride. I was never straight edge though ... just to clarify. That shit is for the wrestlers. Not for me, cause I like DRINKING AND SMOKING.

ST: How did you get into Christian hardcore?

BB: No real clue...I was Christian. I went to this Christian school grades Kindergarden through Senior Year all in the same building...there were like 40 kids in my graduating class and about half of those kids I went to kindergarden with...and were with my whole childhood.

ST: How did you get into using GameBoys as your main instrument?

BB: I started doing circuit-bending stuff, but the problem with those was that they were constantly breaking. I realized I could get all the same tones out of a GameBoy so much easier and you can chuck one of those things against a wall and it'll still work.

Right now, I'm going to say it ... I am the best GameBoy player alive. I'm the Robert Johnson and Lil Wayne of that shit. You should title this article ... "BEST GAMEBOY PLAYER IN THE WORLD: ALSO LIKES POMS; MEDIOCRE/BAD COMEDIAN AND ARTIST." That's the kind of title that makes for a good interview.

ST: Your work as Narwhalz seems just as focused on performance art as the music itself. I remember at Whartscape this year you swung a metal light around and smashed it on stage, sending glass everywhere, then destroyed your GameBoys and screamed “I’M NEVER FUCKING PLAYING AGAIN” or something like that. Can you expand on this aspect of your performance and the character that you play as Narwhalz/Wigger Mom/etc.?

BB: Well, Wigger Mom is a totally different project, more like sketch comedy where you create a character and you get to expand on it and focus different parts of your personality through it. Narwhalz isn't really like that since it's my main project and the band, which is tied in with my artwork and things. It's more of a "gray zone" as far as me fully understanding what is going on. There's this legendary tale of a Steve Martin gig at a college in the 1970s where he refused to tell any jokes. He got everyone to follow him outside to the school swimming pool where he just tried to drown himself for three hours; every time he would come up for air he would scream, "I'M STILL ALIVE" and the whole crowd would cheer and then he would go back to trying to drown himself. I think that's kind of how my live shows go. I'm surprised there aren't more bands rooted in this type of logic.

ST: Pomeranians are a recurring theme in your work—what is your fascination with these small dogs?

BB: William Wegman said you gotta pick a breed and stick with it. Lord knows I look more and more like those little fucks every day.

ST: What are some of your influences (musically, visually, poetically, etc.)?

ST: Your Twitter page functions as an outlet for your poetry—can you talk about your tweets and what inspire them?

BB: WALKING AROUND, SHOOTING THE BREEZE, WHISTLING, SAYING HOWDY TO PEOPLE ON THE STREET.

ST: You’ve occasionally done stand up comedy sets under your own name—how do these vary from Narwhalz?

BB: There's no GameBoy involved so there's that. When I used to run the Church of Crystal Light in Richmond, I started doing it late-night style after every party, just kind of rambling. Everyone was drunk and we had a P.A. so it just made sense. My roommate Leo was my DJ and we would just play this one shitty jazz song over and over again while I pretended to be a comedian. I'm not really into being a comedian or really care about it. It's funny to do. Sort of.

I did stand-up at this comedy club in L.A. and straight-up bombed. Every other comedian made fun of me. I dunno if that's good or bad.

ST: You’re a professional smoker; you smoke cigarettes for money as part of a medical study. Can you expand on that and explain how you got that job?

BB: It's the lazy man's cowboy life. You could punish your body working at Best Buy or you could just give it to science for them to kill. Anyone can get a job doing this sort of thing if they like punishment, giving blood and taking experimental drugs that WILL make you want to take your own life.

ST: Have you experienced any benefit/increased attention as a result of the Judge Judy prank? What was that whole experience like?

BB: I got psychically buried and burned for that show. No, nothing positive has or ever will come out of that. The experience was horrendous. Probably the worst, most vile thing I have ever done in my whole life. The night before we went on the show, it was my birthday (26), and I had a dream where my dad appeared to me in the hotel room we were staying in and he told me that what I was doing was killing him. The lights were off in the hotel room and it was like people were shining flashlights and swirling them around on my dad's face. He just kept saying, "I'm dying ... I'm dying."

Then we get there and we're in the green room getting all the other defendants hyped as fuck. Just screaming with this girl that's missing teeth that we’re gonna destroy the courtroom. One of the producers came in and asked Jonathan [Coward] and me if we liked Throbbing Gristle. Then they moved us to a separate green room and producers kept coming in and saying stuff like, "must see-TV" and "you gotta hook this up, I just bought a house."

I thought it would just be fun until I was puking blood at the Greyhound station at seven in the morning on a one-way ticket to Miami. That Judy thing sent me on a bender I will never forget. People on the Internet will probably say I deserve everything I get for this ... and they are probably right that I do.

ST: You tour often, most recently with DJ Dog Dick (Max Eisenberg) and Sewn Leather (Griffin Pyn). What has been your experience touring? How is your act received across the country?

BB: Some shows I do great at, others I fail miserably. There's bound to be a bunch of shit shows but that's part of the game, and shitty shows are my favorite anyway, so I feel pretty good about touring.

ST: What makes a show good/bad for you?

BB: Good ones are ragers where people are freaking out...bad ones are shows where people are just looking at you like you stabbed a puppy in the face. So I can get down with bad ones. I've played shitty shows in Nowheresville, VA a couple of times and always had a good time. One of the better ones was opening up for this Primus cover band at a pizza place in Mechanicsville, VA...where the crowd consisted of one hammered 16-year-old kid and a super hammered 40-year-old. The old guy fist fought the kid...the kid pissed his pants and then got alcohol poisoning. The lady that ran the pizza place said I was never allowed to come back. Awesome.

ST: Any new releases you want to plug?

I'm moving to Los Angeles for a couple months for a performance art piece where I try to make it as an actress.