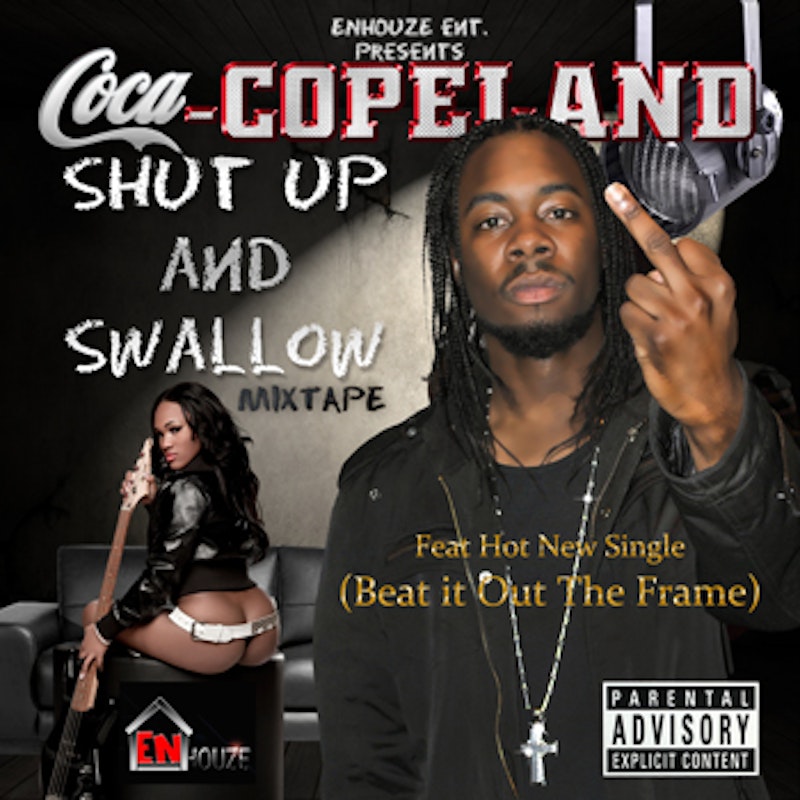 As a rap alias, “Coca-Copeland” simply begs to be unpacked, extrapolated. The sobriquet seems to contain referential multitudes: Coca-Cola, peasants tending poppy fields in Afghanistan, Dorothy and Toto wandering through poppy fields in The Wizard of Oz, hard dudes leaning against pallets stacked to the ceiling with cocaine packets, Barry Manilow’s “Copacabana,” lost afternoons blown fitfully skimming Douglas Coupland’s Polaroids from the Dead. If “Coca-Copeland” doesn’t roll easily off of the tongue—and it doesn’t—it is at the very least a fascinating name because of what it seems to imply, and it’s the most interesting aspect of the Baltimore-based MC presently laboring under the delusion that he has anything to offer the region’s fertile rap scene.

I stumbled upon Coca’s debut mixtape, the triple-entendre titled Shut Up and Swallow, via ALLBMOREHIPHOP, that fickle, roulette-wheel mistress of up-and-coming B’more hip-hop talent. Mullyman and Bossman aside, most of what’s on offer there is stultifying, though usually the hopefuls pimping free downloadable wares—Tay Eaz, Duce Wayne, Huli Shallone, and others—offer some tangible hints of promise, a run of hot verses, a sleeper-keeper banger buried deep in the tracklist.

Not so Coca. His work lacks intrigue, uniqueness, and a sense of presence that could overcome the myriad lyrical clichés this release is littered with. Coca could effectively be anyone, so he’s no one, ridin’ dirty over faux-gritty, anonymously pensive beats that aren’t the envy of anyone. As a result, it’s easy to tune Swallow out, to contemplate what isn’t working in modern rap, to pose questions no one will be able to answer. Are rappers uniformly smitten with redbone women, or do they just pretend to be, because it‘s easy and fun to rhyme other words with “redbone“? Or consider the fungibility of “ova” as a vernacular device; last year, when Rihanna wanted to announce a forthcoming album and create a sense of anticipation, she Tweeted, “the wait is ova.” In that context, she meant “ova“ and “over,” but for Coca, on “Ova Shit,” “ova” signifies “other.” As in: “He talkin’ sideways/He on some ova shit/Where the fuck he at?/Point the nigga out.“

Coca’s narratives and perspectives don’t get much more nuanced than this; worse, he commits the sin of spitting almost exclusively (and exhaustively) for the ladies, alienating most of his potential audience with rote come-ons and limpid relationship-pitfall cheese better suited to R&B. (If only Coca’s song titles and premises were as pregnant with possibility as his name! “Beat It Out The Frame” is not about the difficulties of managing a framing shop in a mini-mall; “Luv Muscle” is not about having a heart tattooed on one’s biceps.)

Shut Up and Swallow’s sole saving grace is an almost imperceptible streak of Cam’ron-esque weirdness that runs through some tracks. You’ll be nodding off as the boilerplate innuendos, lame threats, and also-ran synth clusters drip by, and Coca will spit a verse that suddenly has you awake, and rewinding. Amidst a drawled bout of braggadocio on “Ova Shit,” Coca cracks, “Watch cluttered like an episode of Clean House/Name buzzing like a wasp at a greenhouse.” Not bad. At another point, on “That’s What I Do,” he makes a bewildering assertion about his jewelry: “My wrist game sexy/Rudy Huxtable.” It’s sort of gross, that line, but it grabs you, and makes you wonder: how much more successful would Coca’s debut have been if he’d pursued these creative, oddball avenues?

Just some food for thought, Coca: something to chew on while hopping in and out of whips with redbones, haunting VIP areas, stocking up on Magnum condoms, and plotting your next career chess move.