The Australo-Hungarian Empire Strikes Back

Listening to John Williams in Vienna 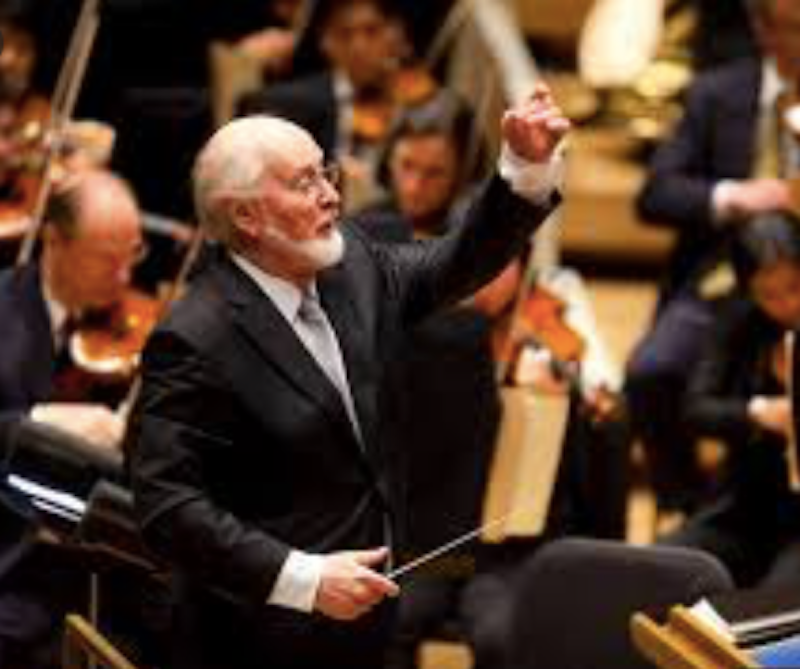 I’m listening to what is, at present, the most popular classical album nationwide: John Williams In Vienna, featuring Anne Sophie-Mutter. It’s a kind of elaborate, unintentional joke. The Wiener Philharmoniker, taking Williams’ compositions seriously, gives them so much space and detail that the seams begin to show. The flaws in his technique cast an appalling glare over every track; they’re so gaudy, one wants to point them out like a man on safari: “Look-ee there! That’s Mr. Williams doing a ‘Spanish’ fanfare with the trumpets! Over and over again! And those cymbals—see ’em?—those introduce vast panoramas of… whatever is panoramic. The big kettle drums come out when all is not as it should be. There’s a French horn! It means ‘wistful farewells.’ The flutes remind us that life goes on. And the violins… well… it’s like Mr. Williams said to me once: ’Son, when you run out of ideas, throw a violin at ‘em.’

The album was recorded on location in Vienna, a spooky, petrified city that’s never gotten over its fall from relevance. It’s not just probable, it’s very likely that some of the nice people in the audience ate Mozartkugels earlier that day, then traveled to the show in horse-drawn carriages. That’s how insufferable Vienna gets. It’s Europe’s Norman Rockwell painting. Vienna’s biggest exports, as of 2016, were delightfully intricate music boxes and obsolete wigs. The default Austrian ringtone is a harpsichord. That’s why, to shake off all stuffiness, they finally invited an American composer to come play Star Wars ditties in their big concert hall. They even provided him with a violinist on the wane.

Anyway, I’m listening to the music from Star Wars, and I get into this lighthearted, forgiving mood. “We’re in the middle of an excruciating pandemic,” I tell myself. “The quarantine seems like it’ll never end. It’s only natural for people to seek out comforting music.” In a mood like this I can easily forgive Williams for plagiarizing from Holst and various Russian Romantics. But I can’t shake the image of his venue, that senile remnant of bygone empires, a city so morbid that it’s eager to host an American, even now, when America equals Trump in the European mind. I can’t help wondering if this is what it’ll be like to visit New York (by submarine, I guess) in the year 2300.

That’s when it hits me. There’s something wrong with the music. This is the best composing Williams has ever done: the melodies of the “Imperial March” and “Luke’s Theme” are note-perfect, and most people can hum them from memory. The problem is that when Williams decided to score Star Wars like Richard Wagner, using “leit motifs,” he created static versions of every character. It’s inherent in the method; Luke is always represented by “Luke’s Theme,” so he’s always sad and resolute. Leia is always gossamer, compassionate, and a sort-of love interest. Darth Vader is always marching down some long, battle-scarred corridor.

The movies aren’t like that at all. Luke’s anything but static; over the course of the trilogy, he grows up. A whiny teenager becomes a driven, fearless warrior. Darth Vader also transforms, changing from a petty, tyrannical agent of evil into the father and liberator he ought to have always been. Han Solo sprouts a conscience. Even the droids take big steps towards shedding their hang-ups. Only the music stays frozen in carbonite, telling an obsessive story about the battle between good and evil, albeit one leavened with trumpets and “adventure.”

When I was young, I liked the lightsaber duels in Star Wars. Now its quieter pleasures stand out to me. “What I said was true, from a certain point-of-view,” Obi-Wan Kenobi tells Luke, after being found out as a liar. His voice is heavy, earnest, almost pleading for understanding. In that moment Luke realizes that Obi-Wan, like Uncle Ben, can’t bear to give him a full measure of freedom. I’m equally struck by the courage that Han Solo summons when he goes out into a blizzard looking for Luke Skywalker. He goes alone; the other rebels are worried about Luke, too, but they’re too frightened to help. Solo ends up making a guessabout the right thing to do. The galaxy depends on conflicted, uncertain people, and when those people do make mistakes, the damage can barely be contained.

These complexities all emerge from the relationship of past to present. Luke has to learn about his father. Obi-Wan has to come to terms with failing his protege. Solo has to face the gangsters who are still after him for debts he ran up as a smuggler. Even Yoda has to struggle to trust a new generation of Skywalkers, prodigies scarily similar to the Jedi who betrayed him. Everyone has to find a way to be better than themselves. If it’s true that every Star Wars fan pictures himself holding a green lightsaber, dueling with crimson evildoers, it’s also true that the movies caution us against applying such binaries too blindly.

That brings to mind a quote from W. B. Yeats: “Out of the quarrel with others we make rhetoric; out of the quarrel with ourselves we make poetry.” The city of Vienna emerges, as a companion to the music of John Williams, like The Ghost of Christmas Future, beckoning us towards an eerie vision of what America might look like after its collapse. Hastening us towards that endless night is our compulsive need to find enemies, both domestic and foreign, in order to disavow and vanquish them. But that antagonistic perspective has no place within a true democracy. People who vote against our party aren’t “vanquished” when we win; they come to work the very next day, like we do, and continue to occupy the desk beside us. America has always been superbly rhetorical; anyone who hears “The Imperial March” can confirm that. John Williams in Vienna is a foregone, comforting adventure, hewn from our quarrels with others. But read more deeply, as a symbol of this American moment, it reveals how little we know about the solidarity, and mutual understanding, we might stand to gain from a quarrel with ourselves.