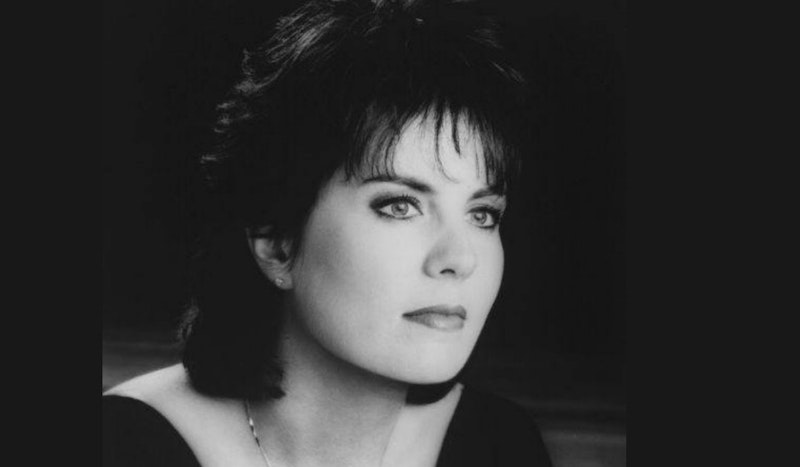 You expect a country star to get canceled for the sort of thing the Dixie Chicks did in 2003: expressing anti-military or left-wing sentiments, or messing with that thin blue line. Even now the country audience must skew right relative to the population. But Holly Dunn—one of the best country singers and songwriters of her generation—was canceled by feminists, including female country listeners. Or maybe the feminist in Dunn canceled herself.

The song that caused the stir was problematic, for sure, but the response was as sexist as the lyrics, and it ended up curtailing Dunn's career prematurely. By the time she died in 2016 of ovarian cancer, she was a morning DJ and painter, retired entirely from performing, which would be an unusual fate for a country singer with a number of hits: once the radio play fades they're likely to spend their lives playing to happy audiences at county fairs.

Anyway, the problem was a 1991 song called Maybe I Mean Yes, written like many of her songs with her brother Chris Waters. It went like this:

When I say “no” I mean maybe

Baby don't you know me yet

If it ain't a little hard to get

So let me clarify

So you don't have to try and guess

When the song started scraping the bottom of the charts in its first week, there was an "outcry." It was framed as a piece of advice for men on how to understand women, and it sounded like an invitation to date rape, or a justification for not taking “no” for an answer.

Dunn reacted completely without defensiveness, but in a way that might’ve scuttled her career. She said she'd written it with Waters as a playful lark and the rapey interpretation never occurred to her. Once it did she was horrified by what she'd written. "I look back on that and think, ‘How could I?’ Because I was a fairly feminist-type thinker and still am. How could I have been so unplugged from the subject matter to miss that?"

She insisted that her label Warner Bros "withdraw" the single and she faxed radio stations requesting them not to play it. She may have asked the label to withdraw the album (Milestones) from the market. If so, they declined, and you can still find "Maybe I Mean Yes" on the digital version of that greatest hits package.

The coverage was in its own way very brutal and sexist. Billboard described the flap as a "publicity windfall" for Dunn as CNN and Fox ran stories about it and she wound up on Today. Many of the stories speculated it was a publicity stunt. They doubted Dunn’s sincerity at every step. And it wasn’t a windfall; it was essentially the end. Warner, which might’ve been pissed at her for the expense of issuing and withdrawing records and the bad publicity, half-heartedly released the record it already had in the can (Getting it Dunn), which produced no hits or publicity, and then quietly dropped her. She put out a couple of records later in the 1990s for a small label, and retired to do a radio show in Detroit.

Throughout this whole period and right up to today, country songs by male singers can be sexist. I don't know where to begin: maybe try Watchin' Girls Go By or Baby's Got Her Bluejeans On. Males made careers out of this sort of stuff, rather than losing them. The idea that Dunn, who was always a painfully sincere and religious person, was engaged in a diabolical manipulation of the publicity machine was idiotic, and a male artist seeking publicity would be greeted with amusement. In other words, the cancellation was as sexist as the song.

Now she's terribly represented on iTunes, for example, every available album a mishmash of the same few songs, some re-recorded. The somewhat-mediocre later albums are available, but not the complete run of her records for MTM and Warner. Thank god for Ben Clevenger on YouTube, who has put up the whole output with good sound. You'll have to tell me what's on Spotify.

The bare bones: She and her brother, the children of a preacher and a painter, came out of San Antonio and there's a lot of Tex-Mex sound in her repertoire, as well as blues, rockabilly, western swing, and hard country songs (she and Waters' classic "Strangers Again," for example, which would’ve been a fine song for Dolly or Tammy). The first couple of singles from her eponymous debut, which were produced in a poppy Barbara Mandrell-vein, stiffed. But the third was her hyper-traditional and still-beloved career song "Daddy's Hands," which she wrote solo and peaked at #7 on the country chart.

Even then she seemed "traditional": Daddy's hands were soft and kind when Holly was crying, but they were hard as steel when she done wrong. She loved him for that too, she said. What a beautiful item. Then, she had her run: many excellent songs featuring some of the best songwriters in Nashville (Joe Diffie, Don Schlitz, and Radney Foster, for example) in collaboration with Dunn and Waters, including two number ones.

Her vocal and production sound was central to the movement from the Mandrells to the neo-traditionalist late-1980s and early-90s, and you can hear its echoes in lovely records from Highway 101 or Baillie and the Boys, even Rosanne Cash. But she nevergot a comeback. I'm calling for—no, I’m demanding—Holly Dunn's posthumous de-cancellation. Don't make me take "measures."

(4) Fewer Threads than These

(9) No One Takes the Train Anymore

(11) There Goes My Heart Again

(15) Half a Million Teardrops

(18) Cowboys Are My Weakness