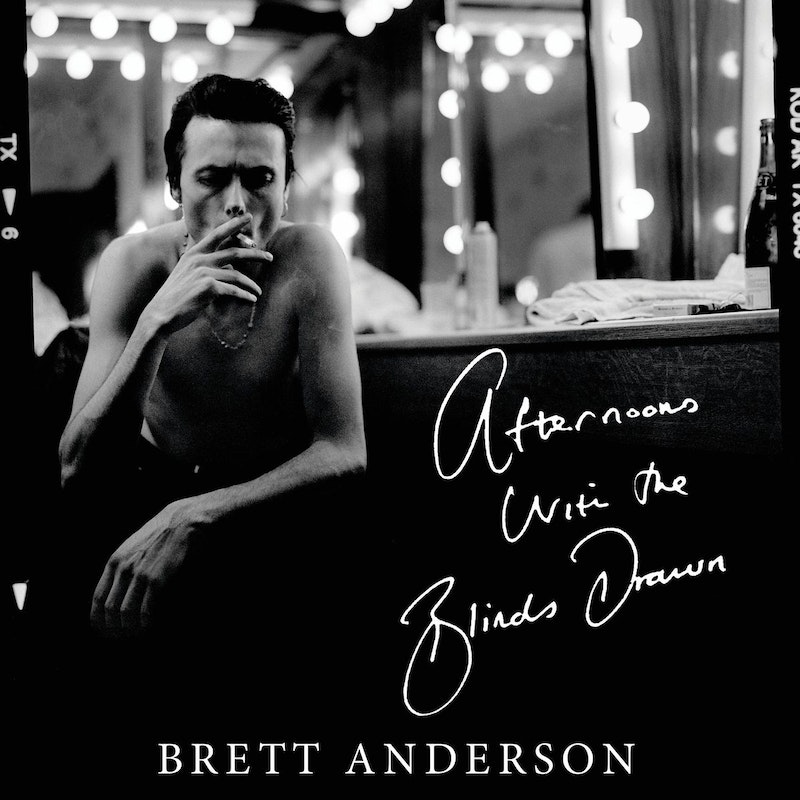 Afternoons with the Blinds Drawn, the new memoir by Suede lead singer Brett Anderson, is as much a work of philosophy as a rock memoir. That combined with Anderson’s high intelligence and knowledge of art and psychology places the book head and shoulders above most celebrity autobiographies.

In 1992 Suede became famous when British music weekly Melody Maker named them the best new band in Britain—before the band released their debut single “The Drowners.” The music produced by Anderson, guitarist Bernard Butler, bassist Mat Osman and drummer Simon Gilbert is sexy, glamorous, tender, roaring and fun—as one critic put it, Suede had a “David Bowie and Lloyd Cole-influenced blend of leftfield rock, wiry pop and punkish lullaby, their songs of love in the gutter, jealousy and dissipation, trash and glitz.” The band split up in 2003 and then reformed in 2010. They still continue to produce great records.

What makes Afternoons worthwhile is Anderson’s insistence on avoiding rock story clichés. He doesn’t talk about heavy drug use, although it’s no secret he indulged. “Inevitably we overdid it,” is all he writes. About the sex life of a beautiful young rock star, he offers: “I staggered between bizarre dalliances and sticky, gaudy dramas… I was trapped in a Futurist painting.” He doesn’t mention his feud with Blur’s Damon Albarn.

Instead, Anderson delves into the machinery that goes behind a superstar group, while also defending Suede’s music, celebrating bandmates and managers, and offering sociological insight. It’s obvious this is more than the classic, predictable rock fare when early on in Afternoons there’s this passage: “Without wishing to come across as pompous, the whole ‘we’re just the same as our fans’ attitude reminds me of dads who believe themselves to be their kids ‘best friends’: false, patronizing and ultimately hollow. Regardless of how unfashionable a viewpoint it is, it has always struck me that any performance is essentially an elitist act and that the stage has a very clear purpose—to separate and elevate a band from its audience—and that the differential therein is an essential ingredient of the drama.”

That reality and the superior songs sums up why I choose Suede over the grunge in the early-1990s.

Anderson recreates the powerful atmosphere of pre-social media rock ‘n’ roll, when subcultures flourished, media influence was huge, and the combat between factions was fierce. A crucial moment in the band’s early life is described particularly deftly. It’s 1990 and Suede is on tour opening for a popular band called Kingmaker. The gig at the Town and Country Club is attended by Steve Sutherland, a writer for Melody Maker. His review savages Kingmaker and praises Suede, saying that having Suede as a supporting act was putting “pearls before swine” and “dogshit” over “diamonds.” The music media, particularly in England, was much braver and freer at the time, and their independence and guts made bands better. Anderson is spot-on here:

I think the piece was ultimately a creative act. Sutherland knew that he was doing something more important than pissing a few people off when he wrote it. He knew he was being outrageous, unpopular, unpleasant and unnecessarily vitriolic but he also knew that his goading would ultimately inspire bands to strive to improve… the music press of the seventies, eighties and nineties was a charged battleground of polarization and opinion that generated scenes. Some of them were laughable, short-lived cultural jokes but some, like punk, went on to change the world and redefine how the public saw music and in a broader sense how they saw art… Nowadays, despite a few notable exceptions, most publication seem too afraid of offending their demographic to have any worthwhile opinion, apparently supporting whatever is in their best interest regardless of its artistic worth, blandly approving of marketing campaigns and fearful of their shareholders.

In one early interview Anderson referred to himself as “a bisexual man who’s never had a homosexual experience.” The press went crazy, and even now Anderson, who’s married and a father, challenges the bad assumptions: “There is zero space for subtlety and shades of meaning in the modern media when it comes to salacious subjects.” What the singer was driving at with his original comment was “Nietzschean ideas about art combining the masculine and feminine” which found powerful expression in the art of Allen Jones.

In the second half of Afternoons, Anderson writes about the songs. “The Drowners,” “Animal Nitrate,” “Trash,” “We are the Pigs,” and “Filmstar.” They’re still amazing, and the newer stuff is very solid, considering Suede is now into its third decade. These diamonds still shine bright.