Drug Politics at an O.A.R. show. 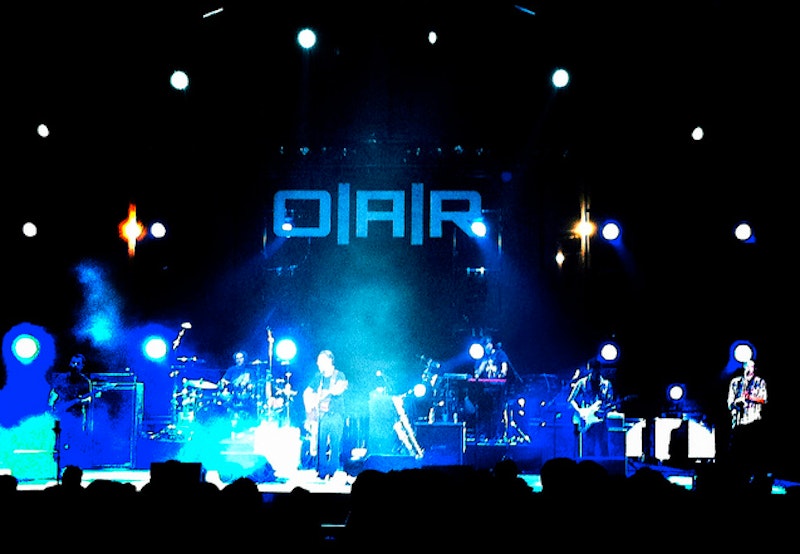 An article in Friday’s Wall Street Journal reported on the rise of drunken rowdiness and stupid behavior at outdoor rock concerts, specifically the troubles of the reggae rock group O.A.R. Consistently saddled with aggressively intoxicated audiences, O.A.R. was banned from New York’s Jones Beach Theater in 2008, and have tried to curry good favor ever since, to no avail. It’s not hard to see why: most of O.A.R.’s audience isn’t interested in the specifics of their music; they go for the social experience and the ability to freely party outside with some good background music. I get that, but I bet it must suck to be O.A.R., knowing that a significant portion of the people that attend your shows are drunken goldfish who won’t remember a note you played for more than a day. At least the money’s good ($150,000 a gig).

I worked at an O.A.R. show in Maryland last summer, and there were no blotto bros—everyone was just bored. The crowd was thin to begin with, due to on and off rain and jaded familiarity (this was O.A.R.’s eighth consecutive summer concert here). Pretty girls in sundresses huddled under big floppy hats and sipped beer from magically shrinking cups. Meanwhile, O.A.R. noodled into a smooth jam and made no impression on the wet, disinterested audience. How depressing to be a band with such a huge number of fans who are not only openly disrespectful, but disinterested, unmoved beyond where the alcohol takes them. As touring becomes the primary means of an artist’s revenue these days, young people are more invested and concerned with the external experience of going out to a concert, rather than with the songs and the music itself—certainly more than they used to be, at least.

Bands like O.A.R. aren’t known for any of their recorded work, sharing that reputation with ancestors the Grateful Dead and Phish. While the fans of these bands are for the most part calm, respectful, and rock hard stoned (the bevy of drugs available at last year’s Phish show: shrooms, Oxycontin, pot, Viagra, meth, coke, every research chemical with a 2 and a C, and black tar heroin), there is an active knowledge of most of their songs and their various jammed iterations amongst the community. I could tell most of those aging Phish fans weren’t there to be belligerent and fucked up, and that’s a pretty good for the band. I wonder where O.A.R. will be in 10 years, if anywhere, and who knows what the bros will turn to as they slip into early middle age. Dave Matthews can’t live forever.