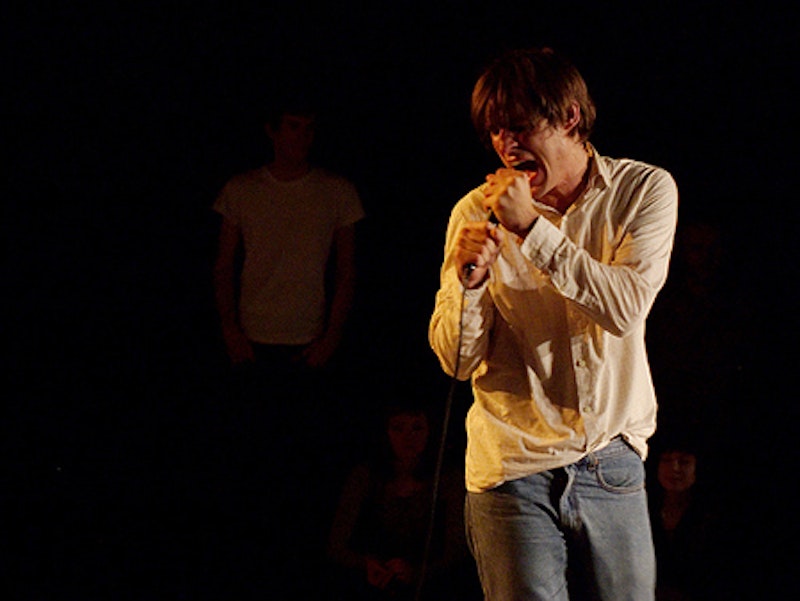 Californian murk-pop artist John Maus is a master of the framed-if-macabre moment, the brief scene, the dawning realization or unsheathed emotion. Somewhere in the depth of my Case Logic library is a song titled “Real Bad Job,” in which Maus intones—with what might be best described as a “Tinker Toy melodic gravity”—no-nonsense concerns about his desperate fiduciary state: “I need money for milk, and stuff/It’s time to get a job!”

Musically, he works from a palette of burnished and shatteringly stark keyboards and synthesizers, filtered through a low-fidelity lens; this isn’t just basement pop, it’s sub-basement pop. In fact, it’s sub-basement pop that recalls the psychopathic dioramas of Ariel Pink’s Haunted Graffiti—the ball-in-a-lotto-hopper bass and spare, sharp drums definitely harken back to Worn Copy and Before Today, in their way—probably in part because Maus used to be a member of that band. But the impenetrable sourness, baritone depth, and overall po’-faced nature of Maus’ voice sets his work apart; there’s an all-over the scale volatility to Ariel “Pink” Rosenberg’s singing range, narrative curiosity, and compositional imagination that Maus either lacks, or doesn’t care to explore. In other words, if Rosenberg stages acid-shocked Super 8 features in his backyard, Maus prefers to shoot black-lit shorts staring the dust bunnies breeding under his bed.

And while We Must Become The Pitiless Censors Of Ourselves (Ribbon) falls into this vein—uber-depressive, eagerly maudlin fare—Maus imbues his downer-cocktail epigrams with soaring, strobe-light synth-pop that stop just short of chasing the shadows out of the room, synth-pop that bizarrely borders on the ecclesiastic. “…And The Rain” presses its stained-glass organ chords against an angelic choir of simulated Mauses, while the rampaging “Crucifix” takes garage rock to church. Sci-fi missive “Quantum Leap” revels in accelerated-treadmill tones, kaleidoscopic bleeps, and spooky echoes; “Cop Killer” proceeds in staggered, waltz-time, mocking its own stoned gait and the foolhardy notions that altered states encourage. You’ll feel creeped out, but you’ll dig that feeling, that seedy, haunted-grease paint vibe, the vague sense of evil and horror offset by horribly brilliant light.

Censors’ catchiest moment is among its least humane: “Head For The Country” is a tour-de-farce of detached, foreboding imagery that suggests an otherworldly or nefarious narrator, the titular locale pivoting smoothly from the romantic (“This is where a human being finds himself a lover”) to the abusively prurient (“Somewhere, a crime is being committed,” “This is where a human being finds himself”) with a magical ease. Horny-horn keyboards and joy-buzzer keyboard effects serve to up the surrealism; “Country” sounds like an escaped mental patient fronting Prince and the New Power Generation or Cameo, and in its charged, cresting valleys and fading coke-rush troughs, you can feel Maus rummaging through your imagination, arranging a nightmare far more chilling than anything present in the song. It may be time to start taking him seriously.