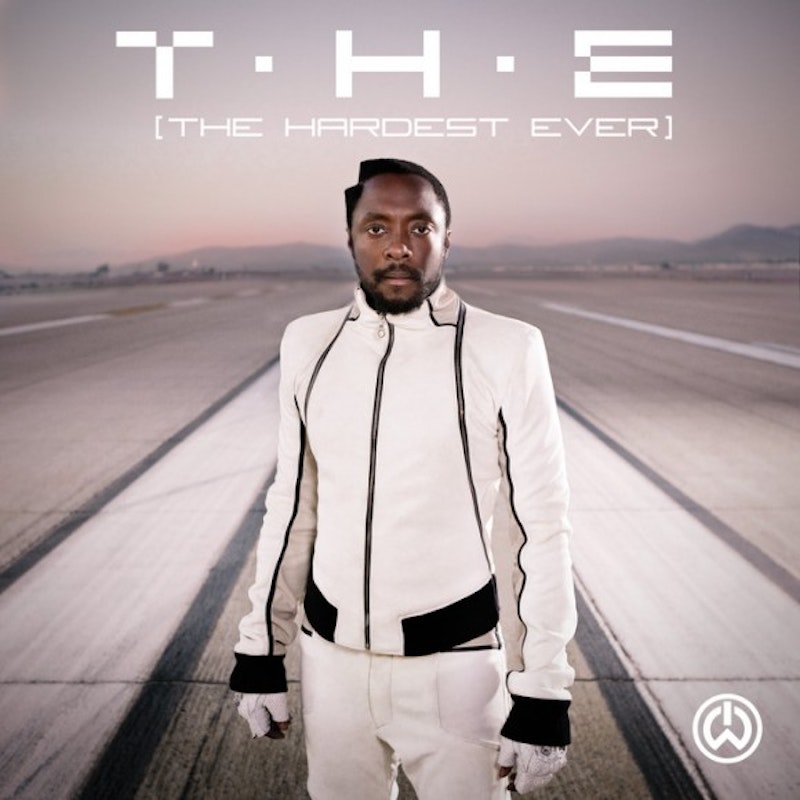 First come the giggles, cut short immediately by the realization that Black Eyed Peas despot will.i.am probably suits up like a Buck Rogers super-villain every single day. Has historical pop-futurist precedent taught us nothing? I mean, the entire idea of will.i.am is predicated, basically, on will.i.am owning a hipper version of the DeLorean from the Back To The Future trilogy and casually commuting between the present and the 30th century. Would anyone seriously expect this guy to don stone-washed Levis and a Rick Perry/Brokeback Mountain jacket and a normal haircut for the cover of a single involving Mick Jagger and Jennifer Lopez?

No way: if will went that route, we’d think he was off his meds. All of that said, the above image should comprise part of a “which of these pictures is not like the others” Highlights triptych; it’s a contextual cluster-fuck. In terms of his expression, a tough read: see, will doesn’t seem to be angry, arrogant, or anticipatory, though his stance and apparent milieu suggest that, if you’re man enough, perhaps you’d care to settle scores with an anti-gravity bowl-off at Andromeda Lanes. Then you realize, wait, will.i.am is actually on some sort of air strip, which stirs up an eternity of questions as to what’s going on here.

What is will.i.am doing at an air strip? How did he get there? Did he leave his Dark Helmet mask on the hovercraft? Who, or what, is he looking at? Where are the other Power Rangers? (Is Nicki Minaj the pink ranger?) Is it possible that will.i.am can actually fly, like a posi-/party-rap Hancock, or does his suit possess properties that enable flight or super-speed or maybe some sort of teleportation? Is he maybe looking past the photographer and at a chagrined J. Lo and Jagger, who are wearing identical duds but refuse to be photographed wearing them on general principle? How many zippers are there, in this suit? If you enlisted a corpse to unzip all of these zippers in tandem, and the suit fell away, would will be wearing the same thing underneath, or a platinum Halo battle-suit? Or is it one of those situations where you could just tug one zipper and unravel the whole thing? And what does any of this have to do with passive-aggressively burying hash-tag rap and moonwalking through the graveyard while sipping a Pepsi?