Stumble of the Sexes

The different genders and genres of the band July Talk. 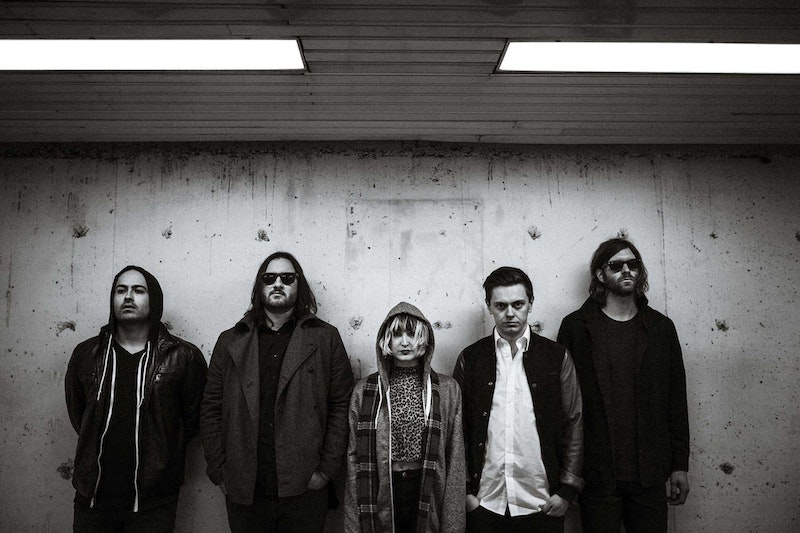 Once, rock was manly music for manly men with manly guitars. Virile licks stomped while the lead singers stuffed socks down their trousers and growled about testosterone, conquest and facial hair. Brutish Morrisons and mighty Plants lumbered upon the face of the world, until they could lumber no more, and fell like patriarchal dinosaurs. And in their place rose up the cute little indie mammals, bushy-tailed and fresh from art school, squeaking their high-pitched odes to hipness and sensitive new age coffee shops. Stipes and Sufjans strummed and blinked as the rainbows fluttered down upon the broken man things.

Canadian alt rock band July Talk loves the masculine thrust of those old rock brontosaurs—but they also have a soft spot for all that softie indie stuff. Singer Peter Dreimanis has one of those growling, hog-calling voices you get once in a generation; a rooting, snuffling, blues gravel that variously recalls Eric Burdon, Tom Waits, Nick Cave and Howlin' Wolf. In contrast, singer Leah Fey is all helium squeak and breathy indie innocence. Together, they create a vacillating virility—a sporadically mincing swagger.

The black and white video for "Paper Girl," for example, comes across as a feminine parody of masculinity, and vice versa. The song starts off with Dreimanis' face alone and centered on screen, that big male voice coming out of his nondescript mug with such power that his lips seem to struggle to contain it. The lyrics are frankly misogynist and controlling, "Don't ask a question… you don't look pretty when you smile/so don't smile at all," he roars, while the image cuts to Fey looking blankly pretty. "If you think it's your turn to ask a question/it's not."

But then it is her turn, and the music goes from blues stomp to tinkly McCartney-esque keyboard plink, as Fey ominously warns, "If you want money in your coffee/if you want secrets in your tea/keep your paper heart away from me." Is it a song about the big bad wolf devouring the little girl? Or about the manic pixie dream girl castrating the woodcutter? "It must be hard to be a pretty girl!" Dreimanis roars, while Fey does heavy lascivious wolf-breathing in the background. The indie girl gets to pretend to be the rock guy and vice versa; the switch is part of the fun.

There are lots of male/female duets in music, from the he said/she said flirtation of country to the we-happen-to-be-in-the-same-place rap verse on the R&B track, to the play with different timbres between Black Francis and Kim Deal in the Pixies. July Talk picks up on a little of all of those, but linking male/female to rock/indie makes their take on gender more abstract and unexpected. "The Garden" opens with Dreimanis bellowing about gardens and Freudian snakes; the video features jowly dog rushing through the snow pursuing a child. At the end, the dog runs the kid down, and whether that's a threat or a joyful reunion is really unclear. "This ain't Johnny Carson!" Dreimanis shouts, "I've got thoughts that ain't my own!" which suggests that he's not so much talking to Fey as hearing her voice bouncing around in his head. "You've got a problem with your hat and the doctor says you shouldn't be alone," Fey declares. The music is almost a parody of driving blues rock; it sounds like it should be a roiling song of lust and passion consummated instead of a confused maybe-declaration of uncertain identity.

That confusion is the best part about July Talk. Blending older rock and latter day indie isn't so hard; the White Stripes for example, are as influenced by the Pixies as by Led Zeppelin. But July Talk is determined to keep those stomping brontosaurs and the twinkling rainbows separate and visible. Gender in their songs is a competition, collaboration, and a bit of a mess, which is the case for genre too. They have two singers not to lift each other to greater heights, but to pull the stage out from under each other, tripping on the snakes in an off-kilter stumble of the sexes.