I’ll Never Get Out of this World Alive is, like pretty much everything Earle has ever done, just okay. 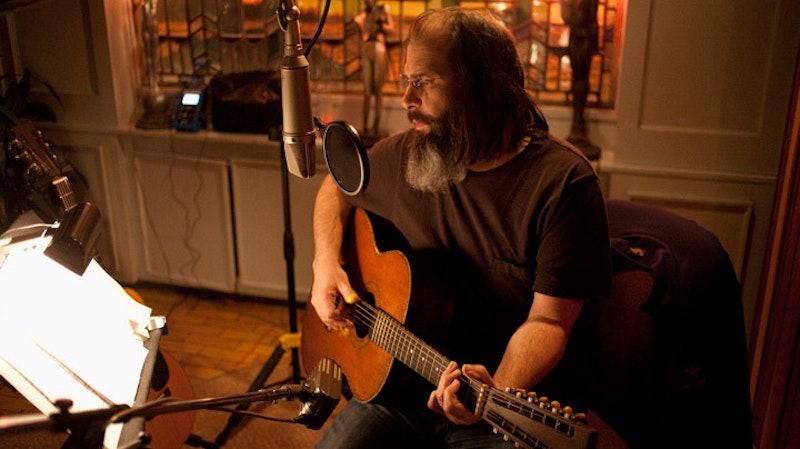 I feel about Steve Earle the way Beavis and Butt-head feel about Tom Petty. It’s not that I hate him or anything. He’s fine, whatever. I just don’t get him.

His most recent album, I’ll Never Get Out of this World Alive is a neat illustration of his mystifying blahness. As Earle albums go, it’s not so bad; no Copperhead Road but better than that dud of a Del McCoury team-up. There are moderately catchy tunes in that anthemic, working-class-hero, shake-your-fist-in-the-air, semi-slogging, not-quite-up-to-Bruce-Springsteen-standards vein that Earle has made his own. He sings like Dylan crossed with a mildly stunned ungulate. Sometimes this verges on charming, as in his duet with Allison Moorer, where her harmonizing distracts just enough that he sounds rough and earthy rather than incompetent. Sometimes, though, as on “The Gulf of Mexico,” his vocals are borderline intolerable. If you’ve ever wondered what the Pogues would be like if Shane McGowan had his humor and energy surgically removed… well, now you know.

“The Gulf of Mexico” is also, incidentally, blessed with a timely maudlin narrative about the oil spill. Earle lugubriously plods through generations of fisherman, Texaco worker, and roughneck, warbling out the chorus “We were rolling/we were rolling/through the blood red waters we were rolling.” If you’re looking for more profundity, there’s “God Is God,” where Earle declares “I believe in prophecy/some folks see things not everybody can see,” over a supposedly uplifting shuffle. And of course there’s “This City,” made semi-famous by Treme, in which Earle proves that he can write blandly anthemic arrangements for horns as well as for more traditional country instruments. “This city won’t wash away/This city won’t ever drown.” Get out the lighters kids. Then prepare to accidentally singe yourself at the sound of Earle soullessly breaking out the New Orleans slang.

I don’t even bear Earle any particular ill will. “The Devil’s Right Hand” is great. His performance on The Wire was charming. Even this album isn’t terrible; it’s nowhere near as bad as the Flatlanders recent output, for example. But his singing is lousy; his lyrics are generally pedestrian (“I am a wanderer/feet on the ground/heart on my sleeve/and my head in the clouds,”) and his songwriting is uninspired and repetitive.

Why is he famous?