Springsteen’s catalog of songs doesn’t often mesh with conservative orthodoxy, but The Weekly Standard dismisses his work far too casually. 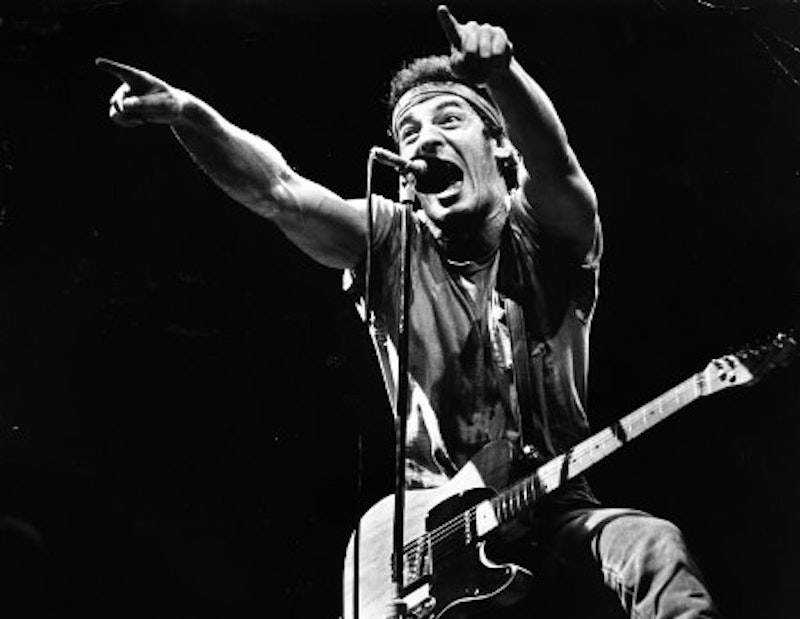 As noted in this space previously, one of my favorite magazines is The Weekly Standard, and its opening section “The Scrapbook” is top of the pops. I’m not sure who currently writes the no-byline grab-bag of witty items—it used to be Richard Starr—and that identity is something of a state secret (unless, I suppose, you frequent the D.C. salons after work) so the following barb has no direct target. Nevertheless, one of my complaints with conservative media venues is that most of the writers either pretend the 1960s counterculture influence was a myth (The Wall Street Journal) or simply have really lousy musical taste.

The April 18 “Scrapbook” included a shortie about “YouTube matinee idol” Chris Christie—I admire the New Jersey governor as well, but matinee idol?—and his soft spot for 61-year-old multimillionaire Bruce Springsteen. The writer was peeved that Christie—who doesn’t mince words about liberal give-us-more-money special interest groups such as that state’s teachers’ union—didn’t blast the onetime rocker for his outspoken views on higher taxes, for example. (Springsteen, of course, is a nouveau-riche champion of confiscatory taxes on the wealthy; even if it’s likely his accountants make sure their boss’ IRS returns take advantage of every loophole.) It’s my guess that Christie, who, like about a million other people, claims he’s Springsteen’s “number one fan,” is a bit squeamish about jousting with his own particular matinee idol, a man clearly past his glory days.

So far, no quarrel, for I find Springsteen’s reflexive, and noisy, liberalism kind of galling as well. But the following sentence rubbed me the wrong way: “If Springsteen wants to play politics instead of music [in fact, these days he doesn’t do much of either], we feel free—and so should Christie—to talk music instead of politics, by pointing out (for example) that Bruce Springsteen hasn’t had a fresh musical idea since his album The River, released 30 years ago, and that his lyrics have become as predictable as the sunrise.”

That critique is as predictable as a Republican presidential candidate toeing, at least in public, an anti-abortion line, but Mr. Scrapbook is either unfamiliar with Springsteen’s work since The River (which was mostly a loser, anyway) or is more comfortable with the tunes of REO Speedwagon, America or Perry Como. Paraphrasing a “Scrapbook” linguistic tic, no doff of the homburg in this case. Look, I cringed as much as anyone when Springsteen released his Pete Seeger sessions a few years back, and his live version of Dylan’s “Chimes of Freedom” was so cloying and smug that it gave me fresh appreciation for Manfred Mann’s cover of “Quinn the Eskimo,” and the Byrds exploding with Basement Tape Bob’s “This Wheel’s On Fire.”

That said, Springsteen, for all his gooey sentiment in the past decades—especially at Rolling Stone’s annual version of its Lion’s Club/Kiwanis dinner, the Rock ‘N’ Roll Hall of Fame embarrassment, in which he gets misty (in a manly way, of course) about influences such as Roy Orbison, Phil Spector, Dylan, Woody Guthrie, Go-Cart Mozart and Fabian—has not, as stated above, been bereft of “fresh musical ideas.” Not a ton since 1980, but certainly enough to fill out a killer CD. Some examples:

•    “Atlantic City” (1982). The best song on Springsteen’s spare Nebraska LP, “Atlantic City” was as different as anything he’d recorded up to that point. It’s a chilling song, with a lyric like, “Now I been lookin’ for a job but it’s hard to find/Down here it’s just winner and losers and don’t get caught on the wrong side of that line/Well I’m tired of comin’ out on the losin’ end/So honey last night I met this guy and I’m gonna do a little favor for him/Well I guess everything dies baby that’s a fact/But maybe everything that dies someday comes back/Put your makeup on fix your hair up pretty and meet me tonight in Atlantic City.”

•    “Dancing in the Dark” (1984). Off the monster Born in the USA record, the MTV video of “Dancing in the Dark” made Springsteen look really dorky, but it’s a tremendous song, start to finish, and if Mr. Scrapbook can’t feel moved by the following lines, maybe he should stick to Jimmy Buffett. “You sit around getting older/There’s a joke here somewhere and it’s on me/I’ll shake this world off my shoulders/Come on baby this laugh’s me…./You can’t start a fire, worrying about your little world falling apart/This gun’s for hire/Even if we’re just dancing in the dark.”

•    “Brilliant Disguise” (1987). My favorite Springsteen song, for his heartbreaking vocal, taut lyrics about a busted-up marriage to actress Julianne Phillips, and candor (“I’m just a lonely pilgrim/I walk this world in wealth.) Musically, “Brilliant Disguise” really was a one-up on Spector’s “Wall of Sound,” which probably pissed off the future felon. He sings: “Well, I’ve tried so hard baby/But I just can’t see/What a woman like you/Is doing with me/So tell me who I see/When I look in your eyes/Is that you baby/Or just a brilliant disguise.”

•    “Lucky Town” (1992). A relatively obscure song, meaning it won’t rank in any Top 50 of Springsteen songs that Entertainment Weekly compiles every two years, its jaunty jingle tickled me when it was released. So much of Springsteen’s work is intended to, I cringe to say, “speak truth to power,” but on “Lucky Town” it just sounds like he’s having a ball. Could be wrong, but in the following lines it appears he’s making fun of himself: “Well here’s to your good looks baby, here’s to my health/Here’s to the loaded places that we take ourselves/When it comes to luck you make your own/Tonight I got dirt on my hands but I’m building me a new home.” I don’t imagine Springsteen got his hands dirty much, literally and figuratively, in ’92, so the notion of him “building me a new home” was successfully hilarious.

•    “Streets of Philadelphia” (1994). Recorded for the film Philadelphia, your heart is surely filled with the boiled guts of birds if you couldn’t feel the controlled, somber pathos of Springsteen’s vocal. I was living in Manhattan at the time, and, like in most big urban areas, you couldn’t walk two blocks without seeing a ravaged young man, emaciated, twitching, skin ruined with lesions, and about to die from AIDS. Springsteen had it down when he opened the song with these lines: “I was bruised and battered, I couldn’t tell what I felt/I was unrecognizable to myself/I saw my reflection in a window, I didn’t know my own face.”

•    “Further On (Up the Road)” (2002). The Rising was Springsteen’s last great record, the definitive rock statement about 9/11, and its only blemish is that it wasn’t released until a year after the attacks. I suppose that’s modern recording, but Neil Young lassoed Crosby, Stills and Nash immediately after the Kent State killings in 1970 and released the single “Ohio” just four days after the event. In any case, “Further On” is just one of the powerful songs on The Rising that hit the mark. He sings: “Got on my dead man’s suit and my smilin’ skull ring/My lucky graveyard boots and song to sing/I got a song to sing, keep me out of the cold/And I’ll meet you further on up the road.” In pop culture, I think The Rising and the first season of Rescue Me captured at least part of the complicated and harrowing feelings felt by Americans, but especially New Yorkers, after the Twin Towers fell and so many innocent people died.