SoulJazz's new compilation highlights the best of the South's musical miscegenation, while also casting a light on the uglier side of white Southern identity.. 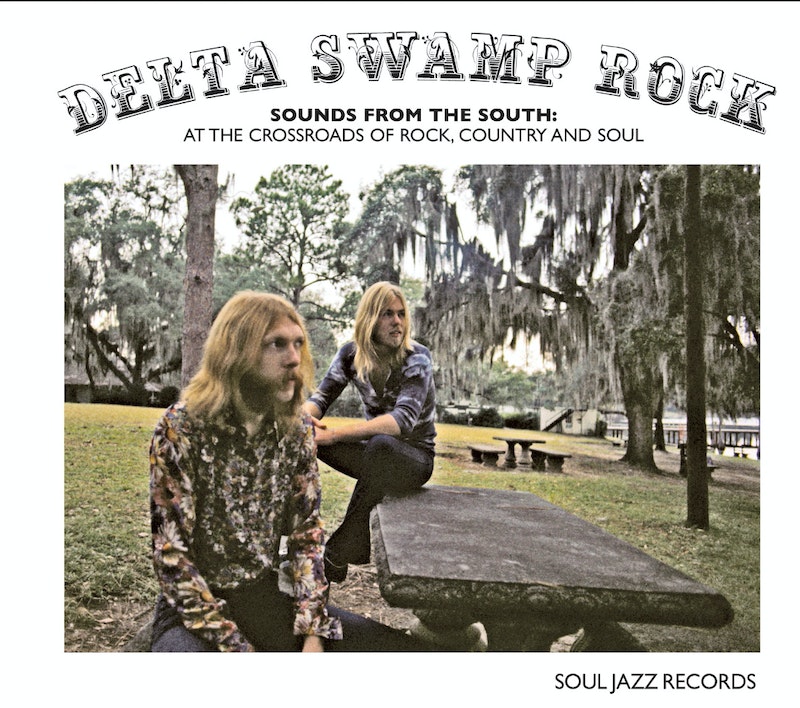 Much of the best American music is the offspring of miscegenation. Whether it’s African-Americans in New Orleans repurposing white band instruments; or Elvis combining country and R&B just as his hillbilly forbearers did for generations; or mash-up artists deliriously merging together white and black; segregation has traditionally, and gloriously ended at the borders of the recording studio.

SoulJazz’s two-disc compilation Delta Swamp Rock:  Sounds of the South, At the Crossroads of Rock, Country and Soul provides another satisfying instance of musical cross-breeding. Expected country rockers are represented—Lynyrd Skynyrd and the Allman Brothers show up on several tracks. But the comp spreads its net wider, too, focusing especially on the scene around the famous session players at Muscle Shoals, Alabama, but also reaching out to Memphis and Nashville, with some surprising results. Cher, of all people, delivers a soul-soaked, down and dirty vocal for “Walk on Gilded Splinters,” recorded in Muscle Shoals. Area Code 615, a group of Nashville session musicians, provides “Stone Fox Chase,” a bluegrass-meets-blues-funk rave-up that was later sampled by Kool G. Rap and others. Dan Penn, known for writing hits for James Carr and Aretha Franklin, here sings his own Stax-ready, Memphis-recorded “If Love Was Money.” Linda Ronstadt on “I Won’t Be Hangin’ Round” is encouraged by a chorus that seems to have strolled out of a black church; Waylon Jennings’ “Big D” sidles up to funk, and the whole album is soaked in blue-eyed soul.

SoulJazz’s eclectic, thoughtful choices throughout the two discs emphasize the oft-ignored fact that the South, at least as much as the north, has been a locus of racial integration and racial borrowing. This comp makes sense of the fact that the couple who won the case for racial intermarriage in the Supreme Court, the Lovings, came, not from New York or LA, but from rural Virginia. It’s a reminder that some of the first integrated sessions ever were Jimmie Rodgers recordings.

And yet. While SoulJazz has provided a testament to the South’s proud and little-known history of color-blindness, it’s also highlighted the South’s much better known, and sadder, history of segregation. In its extensive liner notes, SoulJazz mentions several times that the Muscle Shoals scene, steeped as it was in soul music, nevertheless represented a step back in terms of race. The Memphis-based Stax, where so many soul hits were recorded, had as its house band Booker T. and the MGs, an integrated band. Muscle Shoals was inspired by Stax’s example… but its musicians were all white.

The Allman Brothers band did have a black drummer, Jai Johanny Johanson. But the other pillar of the Southern rock movement, Lynyrd Skynrd, was not only all white, but flirted with segregationist rhetoric, unfurling a Confederate flag during their live performances and giving a bump to George Wallace on their hit “Sweet Home Alabama” (not included on the comp.) The fact that African-American Merry Clayton sang back-up on that track intensifies the cognitive dissonance, but doesn’t exactly excuse it. As SoulJazz says, “Walking the line between southern working-class pride and simply reinforcing southern stereotypical bigotry could be a tricky business.”

The sad part about Delta Swamp Rock is that it chronicles a moment when maybe the South could have figured out how to separate bigotry and working-class pride once and for all. There is no doubt that the musicians represented on this comp, and the scene they were part of, loved black music… and indeed, no doubt that they saw it, not as black music, but as Southern music, an integrated tradition that was simply theirs, without the painful fetishization and authenticity-mongering that has so often marred work by non-Southern musicians, from Janis Joplin to the Rolling Stones. Bobbie Gentry’s rough vocals drip, not with black accents, but with Southern accents. She sounds like a black singer, at times, not because she needs black vocal tics to validate her, but because she comes from the same part of the world.

But then there’s the question—if you come from the same part of the world, if this is your tradition, and if that tradition is color-blind, why are the people you surround yourselves with so overwhelmingly pale? The tradition SoulJazz chronicles here was eager to integrate music, but its willingness to integrate musicians was much more nervous. A drummer here, a back-up singer there, but overall blue-eyed soul remained separate from just-plain soul. American R&B attained its current, not insubstantial level of integration through the urban bricolage of hip-hop, rather than through the rural byways of country. White Southern identity remains, to this day, white—defined by a sideways avowal of a rebel segregationist past, rather than by an embrace of its rich and honorable integrated culture. Delta Swamp Rock makes the case that things could have been different, and points to some of the painful reasons why they weren’t.