No end-of-the-record-store talk here; we still take comfort in the crate-digging culture. Here are a few of our favorite hubs. 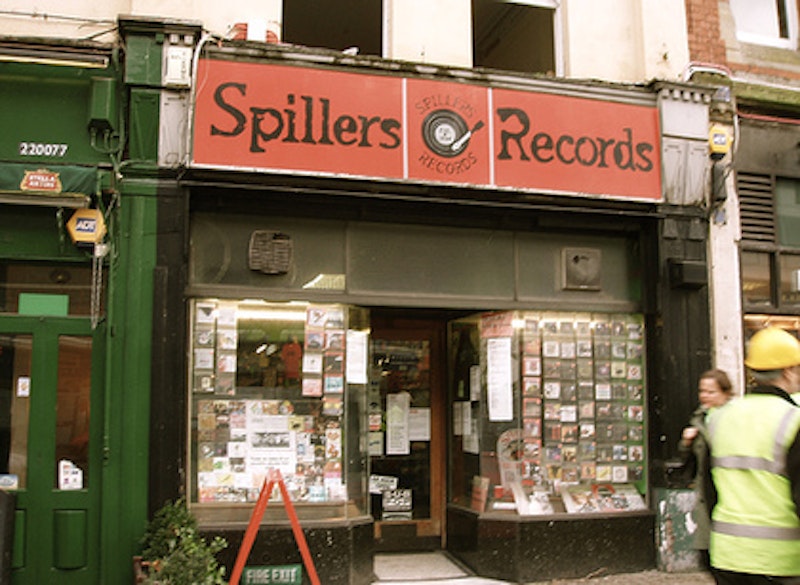 This roundtable is about record stores, but it’s not about their decline. Lamenting the loss of fine establishments would be an easy pitch, but instead, we’d like to celebrate some of our personal meccas. Because, you can tell a lot about a city by its record stores. They’re counter-cultural havens for intellectuals and a lot of really poor (we’re talking $$$) musicians, and no matter how dismal the economy, junkies have to get their fix somewhere.


Zach Kaufmann
There will always be a special place in my heart for The Sound Garden, the music store in Baltimore: well stocked; cheap used CDs; friendly, smart staff; weird b-movie porn—what more could you need? But I've had the good fortune of visiting (on three occasions) the oldest record store in the world, Spillers Records, in Cardiff, Wales. They first opened way back in 1894, selling wax phonograph discs. When I first went, early in 2007, stopping off in Cardiff on my way to London, I was really surprised by how small it was: one room, shelves lined with CDs, posters and photos above, boxes of old records crowding the floor. I've heard they sometimes have in-store performances, though I really don't know how that's possible. It's where I first bought the Red House Painters (the self-titled Rollercoaster album—not their best album but not a bad start). I bought Neil Young's Everybody Knows This is Nowhere and Tom Wait's Heartattack and Vine. Not obscure purchases, to be sure, but good ones. I didn't ask for a suggestion from anyone who worked there. I should have. A record store is only as good as the guys who work there, of course.


Russ Smith
The first record purchase I made was over 40 years ago, a $.59 single of the Zombies’ classic “She’s Not There” at the local Sam Goody’s, so, for better or worse, I remember when vinyl was vinyl and not a niche item. As someone who owns a couple of thousand CDs and records (mostly stored in the basement now), I don’t go to record stores often these days, unless out on a jaunt with my kids, who are eager to push their favorites on out-of-touch Dad.

Nevertheless, while over the years I frequented the chain stores—Sam Goody’s, Tower, Virgin, Korvette’s and so on—there was one small shop in Berkeley on Telegraph Ave. that was the best in the country, mostly because they sold bootlegs, at the peril of being “busted” (to use the jargon of the time) by local cops. Decades before the awful movie I’m Not There was in theaters, 1973 to be exact, I found a bootleg at Rasputin’s that contained that particular Dylan song—“I’m Not There (1956)”—and though the quality of the recording was dreadful, I could half make out the lyrics and played it over and over and over and then 100 more times.

The clerk at Rasputin’s, smoking a cigarette and maybe reading a book or underground newspaper, would size you up when you asked if there were ‘boots available and, if you made the cut, he escorted you to an unmarked bin. It was cool, the buying process, but even better was hearing unreleased Dylan songs—I also got The Great White Wonder at Rasputin, which although also of lousy quality, had better versions of the ’67 Dylan/Band collaborations than the official ’75 Columbia release of The Basement Tapes—and sharing them with friends. Freebeing Records in the East Village was pretty great too, but Rasputin’s was tops, a place that not only had dirt-cheap prices but made you feel like part of a conspiracy.


John Lingan
Apparently this place is legendary, but I'd never heard of Waterloo Records when I visited the Austin store a few years ago. Drawing on the town's famed music scene, the store was incredibly well stocked and leaned heavily towards indie labels and rootsier stuff. And good prices.

Normal's Books and Music in Baltimore also has a pretty unbeatable vinyl section for its size. The fact that it's also a great used bookstore sweetens the deal.

Gabriel Baker
Washington, D.C. and its surrounding neighborhoods are full of top-notch record stores and hangouts yet I never really did take advantage of them. I wish I could say that I went to Orpheus Records (Clarendon, VA) on the regular but that would be a flat-out lie. The truth is that unlike Lloyd Cargo and probably a majority of music writers, I'm not a big record junkie—with the amount of physical relocation I've done in the past five years lugging crates upon crates of records and sleeves would have been a serious undertaking. As a result, most of my musical exploration has come via friends, CDs, tape cassettes, and a lot of music blog scouring. But there are several stores that have at one point or another played a part in my life.

Back in high school, I had a whole handful of friends who worked at the CD Game Exchange in Tenleytown, which recently just closed down. I bought my first Pietasters album there (Oolooloo, which was an excellent purchase) during those ska years. I also bought at least three Sam Cooke albums there as well. The real dope experience however was just hanging out at the store and not buying anything at all. My friends Sam and J Russ would blast dozens of CDs (all different vibes and styles, from Steve Reich to Fugazi) and we'd groove to ‘em with a Slurpee on the side.

Recently, when I've been back home in D.C., I make sure to head out to Roadhouse Oldies in Silver Spring (right across the street from Negril Jamaican Eatery) where they have an excellent soul, gospel, and blues inventory. Ain't nothing better than scoring a jerk chicken sandwich and an Ovations album in the same afternoon.


Nicky Smith
Every time I go into The True Vine (located on a side street in Baltimore's Hampden neighborhood), I learn something new. Whether it’s scanning the racks of CDs and records, talking to proprietor and co-owner Jason Willett, or listening to whatever is playing from the wall-mounted speakers, every visit to The True Vine is both a humbling and enlightening undertaking. The inventory is composed largely of music that is difficult or downright impossible to find anywhere else, including limited runs and obscure pressings.

Jason handpicks a lot of the stuff he sells, and the result is a record store very much indebted to the idea of  “quality over quantity”; there are only a few vinyl racks and a sparse CD rack, but almost all of what is available is worth your attention. A sampling of their stock, surveyed from a recent trip: France Gall, Boredoms, Hasil Adkins, Joe Meek, J Dilla, The Twinklers and Tom Tom Club. Jason is always happy to give recommendations and talk about music, something I suggest everyone who visits The True Vine do. Jason's musical erudition knows no bounds, and luckily he's an incredibly nice guy who's ready to talk about everything with passion and vigor. A must for anyone living or traveling to Baltimore.

Lloyd H. Cargo
I can’t even begin to fathom the course of my life without Shady Dog Records in Wayne, Pennsylvania. I started riding my bike there as a 12-year-old, hanging around every day, asking questions and pestering them about jazz to the point they almost had to put me to work. Without their patient guidance, I’d be a rudderless ship.

Working there helped me land a job at Wazoo, in Ann Arbor, MI for just about all of my college years. A perfect job for a record junkie on a budget, Wazoo (and the people there) became a second family, as well as providing higher musical education.

But neither are phenomenal record stores per se. The best used record stores I’ve ever been to are all in Detroit (People’s, Car City, Record Graveyard, Mays’), and I’m the kind of guy that likes to get his fingers dirty. I agree with Zach; a store is only as good as its staff, which is why I absolutely cannot wait to go check out Mississippi Records in Portland. If the compilations they’ve been releasing are any indication, these guys know their shit. Otherwise, I’m very blessed with Amoeba in Berkeley, and Aquarius right across the bay in San Francisco, and every trip to New York (Other Music, Fat Beats, Turntable Lab), Philadelphia (Sweet Jane, Beautiful World Syndicate, AKA) and Los Angeles (Amoeba, The Record Collector, the other Turntable Lab) have their required digging spots.