Skooby Laposky, a.k.a DJ Pocketknife, discusses his many projects and releases details about the upcoming sequel to Tambourine Dream. Bonus: An exclusive new remix. 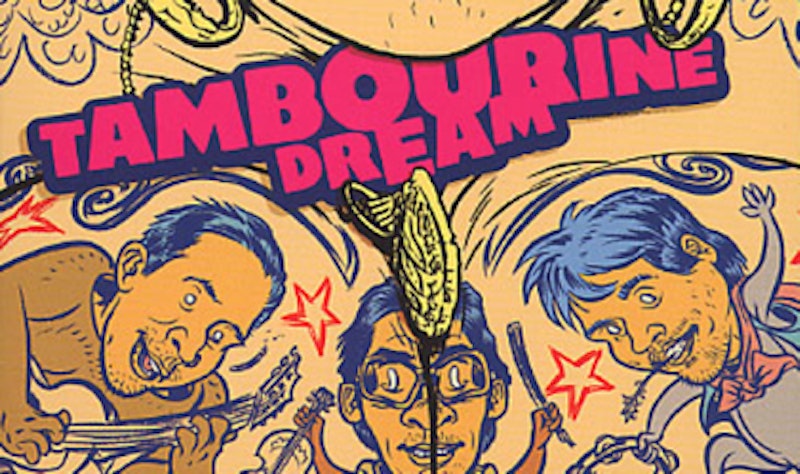 Alongside his partner in crime Cousin Cole, DJ Pocketknife has been generating a lot of buzz in a borough that's become relatively complacent in its over abundance of musicians. Cole and Pocketknife's most recent project Tambourine Dream has become a turntable hit, with remixes of Panda Bear, Iron and Wine, Nico, and the Boss, to name a few. The album adds subtle sound flourishes and additional melodies that envelop the original tracks to create a new sound and experience altogether-the added bonus is that you can dance to it! Of course this is only one of DJ Pocketknife's many endeavors. From composing film scores to performing with a full choir, the man has a lot going on. But thankfully, he took some time out of his schedule to tell SPLICE TODAY just how busy he really is.

SPLICE TODAY: I have to imagine being a DJ in Brooklyn, NY, well, how many other people are doing that, right? How do you stand out in the crowd and how do you make your living?

SKOOBY LAPOSKY: I've had a 9 to 5 job with MOMA for the past four years. And I'm at a good point now to phase out of that. Plus I just had a baby a few months ago so I'm a father now. And the plan with my girlfriend and I is for me to take care of my daughter and then, you know, for me to work. Yeah, so I'm doing more commissioned remixes and I do film scoring and sound design work. I think that'll be the main thing, starting as early as this fall.

ST: When Tambourine Dream came out, it was released in several different formats including the sampler EP on vinyl with those really sweet graphics. So what's the story behind the illustrations and Obi strip?

SL: The whole idea behind the picture disc and Obi strip was Casi G's idea from Flamin’ Hotz, the label out of Philly. I think he'd heard some of the early remixes that Cousin Cole and I had done and really liked them. It was kind of different for his label to put out. These tracks were not as club oriented as some of the stuff he normally puts out. But he really liked it. And one thing with Flamin’ Hotz is they really try to do interesting packaging. So he wanted to do a picture disc. I had worked with my friend Nathan Fox on a few other things. He did the artwork for my very first EP that I released like five years ago. I've known him for a long time since the art school days when he and I were in school together. When Cole and I started Flagrant Fowl my idea was to bring Nathan and my friends on board to do our visual identity.

ST: For Tambourine Dream and your remix process in general, is there a certain element you listen for in choosing songs to rework or is it more of an immediate connection?

SL: A lot of songs were from bands or musicians I had listened to on a regular basis. A lot of stuff I play-out or Cole and I work on is so club oriented that it's nice to take a break and listen to stuff with all acoustic instrumentation. So, I'd just been listening to those different artists for a while and the whole idea started with our first EP. I heard some of Cole's tracks I guess on MySpace. I checked out his tracks and I really liked them so I contacted him to see if he'd want to put out an EP of his remixes. I hadn't really done any remixes before. I was actually working pretty heavily with my chamber group at the time, mainly live instrumentation. But I put together a remix of "Heartbeat" by Jose Gonzales and I thought that was a good way to approach the process at the time; to look for something a little more singer-songwriter oriented—sparse instrumentation, really good melodies, and interesting vocals. So Cole had seen this chalkboard in my old studio listing all my projects, and one of them just said Tambourine Dream EP. At that point I thought I was just going to release five or six songs. And then Cole said I've got some material I'm working on as well, so he sent me some mp3s of his remixes and they were great. So I think we ended up with like 20 remixes.

ST: So your friendship with Cole was formed out of MySpace? Have you ever thought about letting them use you guys as a MySpace success story?

SL: Ha, well I knew Cole beforehand. I knew he was a really serious record collector and really good DJ but I hadn't heard any of his production. I mean Myspace definitely helped facilitate us getting started.

ST: You guys both bring a different style to the overall sound. Pocketknife's sounds are a lot more subtle. You seem to bring more complexity and atmosphere to a song, where as Cousin Cole goes straight into a beat and kind of attacks a song.

SL: I try to approach it almost the same way a producer would, thinking of additional harmonies or some kind of counterpoints to what's actually happening in the main melodies. I like the subtleties and plus the work I've done as a sound designer and film composer, you know, sometimes you just need subtle textures, not to sound heavy handed. I guess I have a little more nuanced sound cause Cole does a lot of club tracks. He works in restructuring them, chopping up everything and spitting it back out in a new way.

ST: They both have their obvious benefits and together they sound pretty awesome.

SL: I think it's a good compliment. We have the same software but our approaches are pretty different. It's good to have that different methodology to study, that way we're always learning from each other.

ST: Is there ever an element of competition between you two? When you're remixing the same song, for example ?

SL: It's funny ‘cause we were just hanging out one night, having drinks. I had just finished this great remix for this song that's going to be on the new Tambourine Dream and I told him the artist and the song and he had done one for the exact same song. I mean we hadn't even discussed the artist at all. I guess our sensibilities are similar. We hear something and we kind of know how we can add our touch to it.

ST: So what details can you give us about Tambourine Dream 2?

SL: I think it's going to have more of an international flavor this time around. I think Cole's got a Turkish folk song that he's done. It's really great. I've got a few Spanish folk songs and we might have a couple in French. I also dug up this Jamaican folk song that I did a remix of. We'll still have all the indie stuff. I think I’m doing another Iron and Wine remix. And then we got a few more kind of classic folk rock artists as well. We're taking our time. The last one we started on at least a year before we released it. Some of the tracks I did for the first Tambourine Dream I sat around and then had gone back to add more instrumentation and rework them. We'll have a lot of different music from different countries. We have almost double the amount of material that we remixed for the first one, so that's going to be a lot to choose from. We might have to try to do maybe a few different releases. But the vinyl version will come out like a double record set, not just a single picture disc.

ST: So is that going to be released through Flamin’ Hotz Records again?

SL: Yeah. Nathan has signed on to do the artwork. So we'll have the same kind of key people involved in the process. I'm not sure when were going to release it. But maybe it would be toward the end of the year, late late in the fall, if it does come out this year.

ST: Okay, I've got one bogus question for you. It seems like you and Cole both rep Brooklyn pretty hard. What do people not know about the borough?

SL: Well let's see, Brooklyn gets a lot of coverage. One thing about Brooklyn...it's tough to say. I can't think off the top of my head.

ST: I mean there's got to be something appealing about it, right?

SL: Oh so why we like it so much more than other places? Brooklyn, there's not a lot of tourists in Brooklyn. It's more like a neighborhood, which is really nice. The city, especially in the summer, all the corners are flooded with tourists. In Brooklyn, it's just local and the people that are visiting aren't like robots, so it's not the same kind of pedestrian flow.