Singer/songwriter Dan Maloney recently relocated to Chicago from Iowa City, and is hard at work on his band's second record. 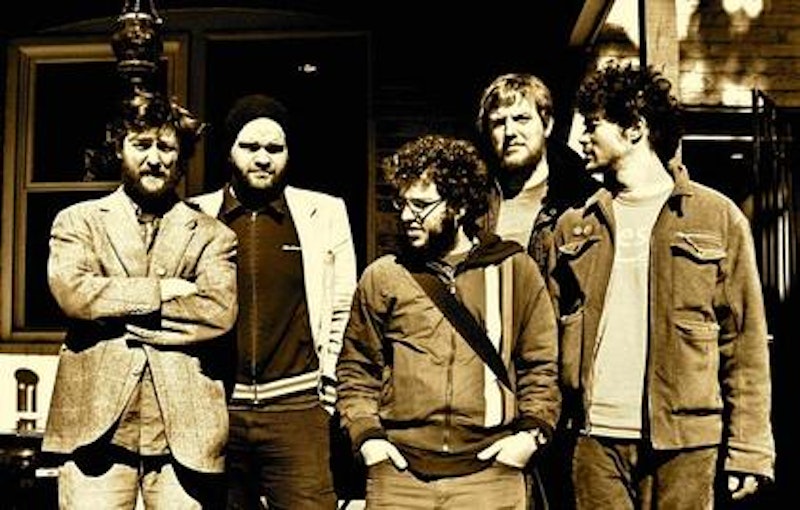 Death Ships started in 2001 as a solo side project for Iowa City-based guitarist and singer Dan Maloney, who was fronting a band called Faultlines. With the help of friends Randall Davis and Adam "Lars" Havlin, and a shifting line-up of backing musicians, Death Ships turned into more than just an acoustic singer-songwriter affair, and their debut album, Seeds of Devastation, released in early September 2006, brought the band many good reviews, most notably by Alternative Press, which called the band's alt-pop style "mature beyond the members' years," and compared them to the likes of Wilco, which is fitting considering the band toured with former Wilco guitarist Jay Bennett a couple of years ago. That's when I first saw them: crowded into the upstairs corner of the Waterfront, one of the dozens of bars that lines Thames St. in Baltimore's Fells Point district. They had me from their first song "Great American," and I've been waiting for more than two and a half years now for their second album. It looks like 2009 will finally be the year. I talked with Maloney last week via email about his recent move to Chicago and what it means for the band. He was also kind enough to offer up some unreleased songs for Splice. Enjoy.

SPLICE TODAY: How has Chicago been? Why the move?

DAN MALONEY: I grew up in Skokie, IL, a suburb of Chicago. Almost all of my family is in Chicago and as I grow older, and as my family grows older, it has become important for me to be around them. Chicago is a great a city, beautifully real I would say. We experience all the seasons, for better or worse, and it is a true hub of Midwestern conscious people. The folly of the move is that I am essentially doing the same things I did while I was in Iowa City by playing music and working in an independent record store. I felt like I was stunting my growth in Iowa City. I really love the town, but as a University atmosphere people come and go, and you just get older. I was verging on townie status, while not necessarily being at a point I was happy with anymore.

ST: Death Ships started out as a solo project for you back in 2001. What kind of songs were you writing and recording back then?

DM: I was playing in what could technically be known as an emo rock band called Faultlines, and on the side I was experimenting with writing songs along the style of the music I grew up with. It took me a while to figure out I could sing better within a certain range rather than "shout/scream." The song "Great American," is one of the earliest songs I wrote back then. I made a video for it as a final project for a video class I was part of in college. I had a four-track and just started recording these songs and then I would have friends contribute. The early incarnations of Death Ships had all sorts of different people playing, a revolving cast. I was notorious for having different lineups for every show even if the shows were a month apart. Anyone will tell you it's hard to sell somebody on a dream. For every successful artist there are twenty more sleeping on floors or broken down vans in "Anywhere," USA. But, to get back to the question, the band started out as a labor of love and it will end that way. I realized I can't not make music, and Death Ships is always my main source of musical output.

ST: Have you heard Jay Bennett's most recent album, Whatever Happened I Apologize, the one he put out for free a couple months ago? How'd you meet Jay anyway?

DM: I just downloaded that record a few weeks ago. I think in true Jay fashion it is a great record. The world can always use a Jay Bennett, even if he at times he feels like the forgotten man. I met Jay through Jeff Macklin, Bennett's manager and for a time he was ours too. I was interested in having Jay produce Seeds of Devastation so I contacted Jeff. Jeff soon realized we didn't have the money to afford Jay, but liked our tunes and decided to take us on as clients. One thing led to another and we got offered to be Jay's backing band for a couple tours he needed to do for Rykodisc Records. I don't speak with Jay very much, but he is a wonderfully misunderstood person, a truly warm, generous, and musically brilliant guy.

ST: What's the music scene like in Iowa City? You don't hear much about it. Who are some of your favorite bands out there?

DM: Iowa City is great for the arts because of the sort of seclusion of the geography. It is a college town so local band bills can include noise bands, folk, hippie jam, and hardcore acts all on the same bill. There is a mutual respect among the musicians living there that allows that sort of thing to go on. I don’t really get that same sense here living in Chicago, but that’s because Chicago is so much bigger with tons more bands competing for the same shows.

The biggest act around the Iowa City area is a friend of mine named William Elliott Whitmore. He has been playing around for years and just signed to Anti- Records. He is an amazing songwriter with a truly out-of-this-world voice. Then there are some other great Iowa City acts like The Tanks, Twelve Cannons, Escape the Floodwater, Diplomats of Solid Sound, Matthew Grimm and the Red Smear, Shame Train, and Ft(the shadowgovernment) that are worth checking out. Iowa City is low on the totem pole of the music world, but that doesn’t mean there isn't great music working under the radar.

ST: I read that you go to Pitchfork Music Fest every year? I was there in 2006, when temperatures were 100+, and the Silver Jews headlined the first night. What are some of the best performances you've seen at Pitchfork?

DM: I have gone every year up until this past year when there wasn't too much I was interested in. Part of the reason I liked going to the festival is that tons of friends from out of town would come in and it was a great excuse to hang out, drink beer in a park, and check out some music. I applaud that the festival offers some great acts for a cheap price. Of years past sets by Les Savy Fav, The National, Jamie Lidell, and De La Soul have stuck out. The festival has gotten so huge over the years and sometimes I can't bear to be sweating in a park with thousands of other people. However, I am glad it is in Chicago and is also a national known event for music.

ST: What are your plans for 2009? And when can we expect the follow-up to Seeds of Devastation?

DM: I have been working on a follow up for over a year called Circumstantial Chemistry. I have some songs recorded and some that I still need to do. It’s been difficult as I am running into economic restraints and the fact that I had to reform the band when I moved to Chicago. I hope to have the new record out this year, even if it means I release it on iTunes or a free download. It's been a long time since Seeds... and I feel I have written some far superior songs and I feel pretty good with my new cast of players. Some of the new songs venture into some new musical territories but I feel that if you liked the first record you will also like the new stuff.

ST: What’s been on your record player/CD player/iPod/cassette deck lately? Are you still listening to cassettes—I've read a lot about cassette-only labels and cassette-only releases lately.

DM: Since I work at a record store I get exposed to new music constantly. This year I discovered a great vinyl only reissue label out of Portland called Mississippi Records. [See Lloyd Cargo’s profile of Mississippi Records --ed.] They release obscure blues, folk, ethnic, rock, soul stuff. I recommend anything they put out. Also I’ve been finding myself digging backward and getting into older stuff this past year like Terry Riley (beautiful folky/rocker that could’ve been in Led Zeppelin), Jim Ford (soulful rocker who sounds like Sly Stone meets The Band), Bridget St. John (folk artist with a voice that can unfasten buttons), Heron (interesting UK folk), and Kevin Coyne. A good source of this diggin' has been found on Aquarium Drunkard. The guy who runs that site seems to tap into what I am interested in musically and always posts the stuff for free.

As for cassettes I ran a tape only label in Iowa City called Faithful Anchor for awhile, in fact Death Ships first release was a split with my friend David Strackany who now goes by the name Paleo (famous for recording and posting a song every day for a year). I love cassettes and I also work with a guy named Michael who runs a successful tape label called Plus-Tapes who releases cool obscure reissues and some new acts. I am talking with him about releasing my home demos soon. All the tapes are limited to 100 and are lovingly packaged. Its nice to see from working in a record store that people are still interested in older formats like vinyl and cassettes. I for one am all for it, I don’t hardly ever listen to CDs anymore and love the vinyl package packed with the download card. That formula could save the independent record industry.

"The Land of Mystery"