Solo troubador David Andrew Strackany talks about  playing in living rooms, his Song Diary project, and why he doesn't listen to music. 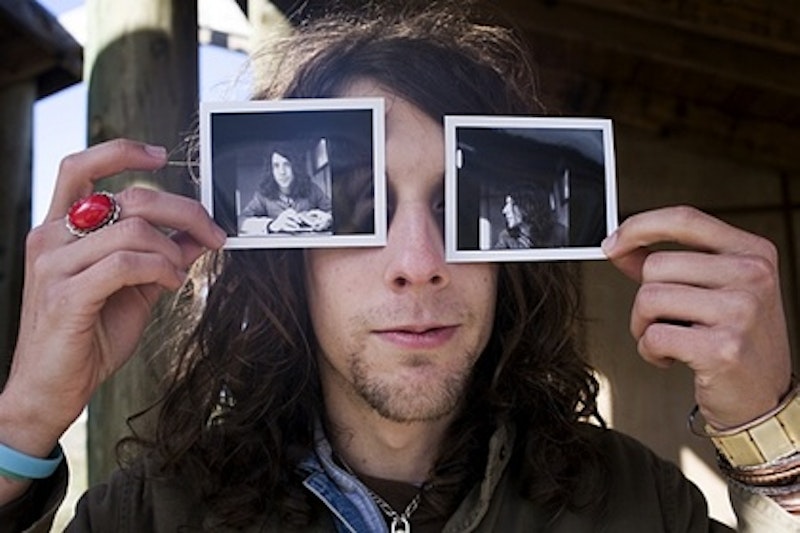 David Andrew Strackany is Paleo. A former member of These United States, Strackany went solo in 2004, recording and self-releasing the album Misery, Missouri (now long out of print), before undertaking what he called the Song Diary. Between April 16, 2006 and April 15, 2007, Strackany wrote a song a day, many of them on a half-sized kid's guitar he named "Oh! Susanna," and traveled the United States, playing 215 shows and putting more than 54,000 miles on his car. This unprecedented musical experiment earned him a lot of press, including USA Today, NPR, and the New York Post, and all of the recordings, along with the lyrics, and a collection of photographs, are available on his website.

Since finishing the Song Diary, Strackany has moved to Brooklyn and begun to rework and re-record some of his songs, turning down record label offers in favor of continuing his DIY approach to music. You can hear the difference in his second Daytrotter session. In a recent email interview, Splice talked to Strackany about the Song Diary and his previous work with These United States.

SPLICE TODAY: Who were some of your early musical influences?

DS: Growing up, I listened to the same things everyone else listened to, to Ronald Reagan and Bill Clinton's credit. Both of those wise guys pushed for and passed trickle-down legislation that helped deregulate telecommunications in such a way that made Clear Channel and News Corp., etc, possible. Hence, I grew up listening to the music that the fat cats in radio and MTV wanted me and everyone else to listen to. That's not to say that some good music wasn't made during that period of time, all I mean to say is that I didn't choose it, so I don't feel it's right I answer for it.

ST: How did you meet Jesse Elliott? Are you still involved with These United States?

DS: Jesse and I grew up in the same town, went to the same middle school, high school, and college. But, for right now I'm too busy working on my own stuff to really do much more with TUS. We're still great friends though, and we talk. Plus, I've still got a few of his tunes I tracked a few years ago, around about when I tracked “The Business” and “Remember Dear,” that'll blow your mind when/if they come out. I still have to mix them though. Crossing my fingers I'll get to it in 2009 sometime. In related news, did have the good fortune of hearing some fantastic tracks off their new record, though, just recently completed. I'm pleased to report Jesse's keeping good time with the new watch.

ST: Did you play with any other bands early on?

DS: I filled in for the bassist of Catfish Haven for a few shows in 2001, the tiniest little stint. But other than that, not really. I've pretty much always been a loner, and don't really work well creatively in a band context. For instance, most of the music for These United States I sculpted alone. Just me and some shitty instruments and a computer screen. Naturally, Jesse would come in from time to time to make sure I wasn't dead. And I wasn't, not back then anyway.

ST: Tell us about the Song Diary. How/When did you decide to do it?

DS: The idea came to me on April 16th, 2006. Easter. That night, I wrote the first song, and from then on out the clock was ticking. Counter to what you might think, there was absolutely no premeditation. I don't know how you could plan for something like that, honestly. Truth is, if I had waited and thought about it for a week, I probably would have chickened out. Because I'm a pussy about most things. But luckily, I just jumped in. I think that's the way it's gotta be with anything. Take Iraq, for example. If these huckleberries had actually taken the time to pause and make a plan, we never would have [invaded] in the first place.

ST: What were you recording on?

DS: I just used GarageBand on my laptop. I didn't have the luxury of having nice studio gear. The recording was, more often than not, an afterthought. It was the process of the writing of the song that was important. The recording was the picture of the event, not the event itself, like a Polaroid of the birthday boy blowing out the candles. You can't take a picture of the wish he wished. That wish was the whole point of the cake, and the candles, and the picture, and maybe even the whole friggin’ birthday and the big birthday party. But you can't take a picture of it, not the wish. That's his and his alone, for better or worse. Make sense? So, a fancy recording rig would've been more hassle than it would've been worth. I usually just mumbled exhausted into the laptop after hours of writing the thing, and that was that. Poof.

ST: Do you have a few favorite cities/venues to play?

DS: I like house shows. Bars, clubs, venues give me the willies a lot of the time. Playing in somebody's house, or DIY space, or indie gallery, that's where it's at for me. In those types of places at least it feels like something real is happening, something authentic. Ninety-nine percent of the time when I play in a regular venue the whole thing feels hopeless. Like there's no way to actually reach anyone because you've got this big stage in the way, and all these lights and drinks and unisex bathrooms. I'd rather be playing in someone's living room to 10 people than to 100 people in a club. And the bigger the club the worse it is, really. That's just my temperament though. But really, the house show scene is a pretty exciting development, and it's very Now. It's something that didn't exist 10 years ago, and may not exist 10 years from now. So, I'm trying to soak it up as much as I can while I can, cuz it's a beautiful thing. It feels like the true roots of music, where music came from.

ST: There's an awesome video on YouTube of you playing "Forever is a Very Long Time," directed by Ryan Poe. How did this come about?

DS: I was playing in a living room in Fredericksburg, Virginia and Ryan was there and he sauntered up to me after the show and said, "hey." To which I replied casually, "hey." He asked if I might be into doing some video stuff the following morning, and I said sure, why not. The funny thing about that video was that there was actually a live, honest-to-god Civil War reenactment going on throughout that whole town that very afternoon. Swear to god. As that video was being shot, throughout that whole town there were grey and blue soldiers trafficking up and down the streets with fake rifles. There were cannons set up behind sandbag bunkers on grassy gores between streets. It was pretty surreal. But not a single speck of that in the shot! Blessed dumb luck.

ST: You've got so many songs. Do you ever play covers? If so, any favorites?

DS: I don't do any covers, sadly. I think the people who wrote the songs tend to play them the best, so I leave it to them.

ST: What are you listening to these days?

DS: Nada. I don't actively listen to music. If someone puts it on in a room I'm in, I'll tune in, but I don't make a habit of consuming music. Some people watch TV, some people don't, you know. It's the same sort of thing. I get a lot of non-fiction books on tape, history books, etc, for the long drives on tour, and I listen to a lot of the news on NPR. There's a lot to know.