The lovely familiarity of Julie Byrne's Not Even Happiness. 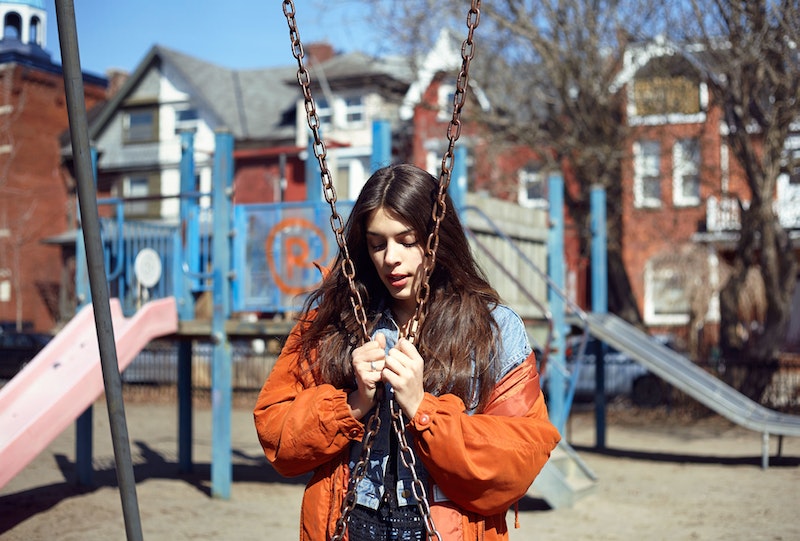 "I've seen a double rainbow/I've got a complicated soul," Julie Byrne sings on "Follow My Voice," the first track on her new album Not Even Happiness. It's a snort-worthy couplet, encapsulating a whole coffee-shop-full of sincere breathy female folk clichés. Dewy rainbow-as-symbol meets ostentatious touting of inner life as depth, wrapped in Byrne's strummed guitar accompaniment and gentle, intimate vocals. Even the black and white cover image is elaborately over-determined. She's posed against a blank gray background, eyes closed, long hair swept to the side, wavy and mussy to signal that complicated soul, while her hands rest against her chest, gently containing the earnestness within.

The genre conventions are what you'd expect. If you hate melodic confessional singer-songwriter folk, you should go to some other album and other tropes. I'm a sucker for dexterous guitar playing, pretty melodies that waft around your head for days, and lyrics about rainbows juxtaposed with confessions of unspecified self-discovery. I like John Denver. I love Donovan and Joni Mitchell. Why shouldn't I like Julie Byrne?

Admittedly, there's some tension between the singer-songwriter confessional mode and the genre's message of sincerity and uniqueness. If the point is that you have a complicated soul, shouldn't that be different than everybody else's complicated soul?

That question drifts around on Byrne's album and ultimately dissolves in the general feeling of comfortable drowse. Byrne isn't trying to project swaggering genius and inner angst; instead, she's reaching for a less urgent bliss. On the ghostly, multi-tracked, "Natural Blue," she sings "Back on tour/riding through south/western, towns that I/had been through before." Her voice breaks the lines at odd points, like she's not exactly paying attention as she sinks back while riding forward, bumping around adrift in space and time. "When I first saw you/the sky it was such a natural blue," she says, an undefined relationship seeping into natural metaphor.

Such hippie earth mother references are all over the album, which includes songs titled "Morning Dove" and "Sea As It Glides," and lyrics about walking in the woods, the dew on the rose, singing gales, and verdant fields. The romantic self is defined by its sensitivity to nature; your soul is complicated because you see that double rainbow, and fly out of yourself to meet it, likes Keats and the nightingale. "The wild washed all thought/of endeavor that was left in me/and will you ask permission/the next time you absorb me?' she sings on "Melting Grid. Boundaries between landscape and self and companion slide into each other. Individuality isn't defined as a new, hip sound the way it is in rock or hip-hop. Rather, what makes Byrne special is the way that she sees herself connected and connecting, losing herself in rapturous tropes handed down by other transcendence seekers. A commune is supposed to be communal. If Byrne sounds like other people, it's only to be expected. The sky looks natural blue to everyone, wherever you happen to be standing.

In the romantic vision, nature is what connects Wordsworth wandering lonely as a cloud and Suzanne taking you down to the place by the river. But for folk musicians, it's not just a vision of rainbows that connects their true selves to something bigger. When Byrne wails sighing oohs in multi-tracked bliss on "Sea As It Glides," she's transformed from one person into a sea of people, swallowed like a water drop in the ocean. The anonymity or pagan multiplicity isn't frightening; it's enjoyable and familiar. Folk music closes Byrne in, and she knows just where she is, right in the genre she's chosen.