Katy Perry’s got nothing over Gaga, despite critical acclaim. 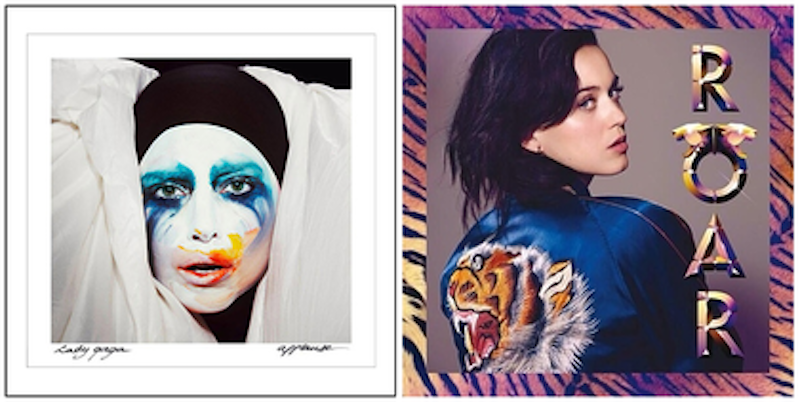 This week Katy Perry and Lady Gaga entered a diva showdown when both pop stars were “forced” to drop their singles earlier than expected because low-quality “leaks” popped up on the Internet. Oh whatever. The whole thing was probably all a publicity stunt from the beginning. In a stroke of promotional brilliance, Perry announced her forthcoming record Prism on a gold-plated 18 wheeler in late July, a trick that must have infuriated team Gaga. Right now Perry’s new single “Roar” sits at the top of the iTunes Singles chart. Gaga’s “Applause,” which was rushed to radio and fans all over the world just after “Roar,” is plum at number two.

I like Katy Perry—a lot. She’s one of my favorite pure pop indulgences, not that I would ever pay to see her in concert. No fault of her own, though. It’s just… something tells me a Perry concert is the most annoying place on earth. But maybe I am missing out on the time of my life! “Roar” is an okay song. It definitely sounds like Perry, with that big, huge chorus a la “Firework” that only she can pull of in that Katy Perry way. It’s her signature. “Roar” is a song you know you like or dislike as soon as you hear it.

“Applause,” on the other hand, a song I did not like on first listen, is much more of a grower. It isn’t a knock out of the park but it’s got a chorus that sits in your head even if you don’t want it to. I was already humming the thing after just hearing a five-second sample of it somewhere on the Internet—I don’t even remember where. But see, that’s pop music for you.

The reviews are in and some critics are already calling “Applause” straight-up “C-list Lady Gaga,” wrapped in self-praise and the tired deconstruction of fame. Others find it only “smattering.” But here’s the thing: according to the iTunes track listing, “Applause” is the very last song on the record, which means that it is nowhere near the best song on the record.

Sometimes I feel sorry for Lady Gaga. Sure, she’s among the richest pop stars in the world. Girlfriend has a crazy rabid fan base and a wig collection that would drive RuPaul insane. But the thing is, when you become as famous as she is and when you do it practically overnight, once that pop star shininess brushes off the critics are the first to jump in and say that your new stuff isn’t as good as your old stuff. You suck! Your new singles just aren’t as exciting or inventive as your first ones, people are bored of you now and it seems like you are all out of ideas. Pack it up—you’re no longer relevant!

It’s true that when artists take a leave of absence from the pop sphere, as they should just to give us all a mental break, lots of new things happen in the market. New stars are produced, new sounds become hot, so any artist that comes back after a period away has to come back swinging, reaffirming their vision as an artist but also plugging into the new ways the market has shifted. Right now, for me, the most exciting people in pop music are Disclosure, AlunaGeorge, and BANKS, people who will be all over your radios and playlists as 2014 rolls on. So when a huge pop heavyweight like Lady Gaga comes back, she’s got to have a huge rock to drop to be interesting.

One review of the two divas that I saw on BuzzFeed, “How Lady Gaga Lost Her Battle With Katy Perry” by Matthew Perpetua, argued that Perry’s “Roar” is easier to relate to, easier to like and so is more commercial. Why? Because it has a much more universal message. “Applause,” on the other hand, is Gaga being Gaga, Gaga celebrating Gagadom, which alienates millions of mainstream listeners but activates her rabid fan base. It’s a valid point—a point already made some 50 years ago by Marxist critics who argued that pop culture was just a proliferation of universality and sameness.

Gaga’s new record, on the other hand, is going to be an elaborate art project where she roams around naked with paint splashed all over her face, sipping tea with art world BFFs Marina Abramovic and Jeff Koons. I love it. It’s an approach to pop stardom and pop music that few artists of my generation have broached. So here’s what I find troubling about Perpetua’s argument: “Whereas Gaga is going out on a limb with an elaborate art project that she must know will alienate millions of people, Perry is embracing a safe sound and a safe message. Is that a better business plan? Yes. But it’s much less interesting. That said, “interesting” is not something everyone wants from pop music. Gaga’s entire career is built on the notion that art and mainstream popularity are not and should not be mutually exclusive.”

Gaga can’t win, no matter how she slices it. She’s not as good as she used to be, if you listen to the critics. She’s too weird for the mainstream, but if she went super duper mainstream she would be selling out. It’s a confusing geography to inhabit.

Perpetua is right in a lot of ways: ARTPOP is probably going to alienate loads of people, as it should if you ask me. Let that Gaga bitch slather encaustic paint all over her face if she feels the need to do so! But the last thing we should be doing is pitting two of the best pop stars on the market against one another—female pop stars no less. Especially not in a world where women consistently make less than men in the workplace, and where female pop stars, as branded bodies, get to exercise some control over their business.